Here's the teaser—you need a paid account to actually read the interview:

He shocked his fans when he told me last month that he had been treated for cancer. But Morrissey has no plans to throw in the towel yet.
- There are far too many who would be happy if I died, says the former The Smiths frontman to Nöjesbladet.

What's up after cancer treatment
Its not so good stay in Stockholm
Why Sweden is a good thing after all
new novel
To throw out a six year old per night to his audience
Politics
meat
Women ruled the world
... And much more!

Is this new? Saw on IG 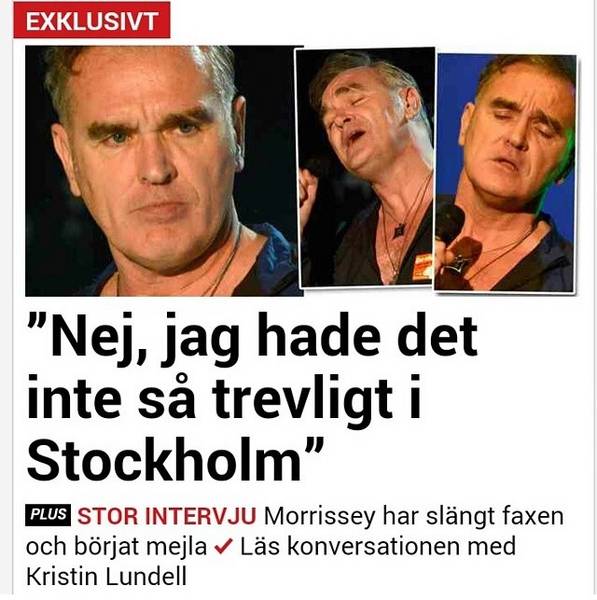 It looks like he did not visit friends in Stockholm. From what I understand it was not a nice trip at all according to what he says so it seems he met some specialist about his illness.

Gregor Samsa said:
To clear this once and for all:
The English equivalent of "vattnet har gått" (moranically translated by GT to The water has passed) is "the water broke, the water has broken". Which in this case means that the book is ready to be launched.

Gregor Samsa said:
To clear this once and for all:
The English equivalent of "vattnet har gått" (moranically translated by GT to The water has passed) is "the water broke, the water has broken". Which in this case means that the book is ready to be launched.

CrystalGeezer said:
Then once they're in the shit they're further manipulated to not see what they're doing. The army is largely comprised of very simple, good-natured people who are good at following orders.
Click to expand...

This has the faint smell of Nazi Germany in the 40s.
A

Once his attack on the american troops gets noticed by certain media he may kiss his green card goodbye and maybe we will see people burn his albums.

I agree with his view on soldiers because american military is all about numbers and not about brains. There are elite troops of course but in the main people sign up cause their life at home isn't so great and we have loads of people who really have no choice but to offer their lives.

I don't think americans in general realise how badly rated american soldiers are by soldiers from other countries.

Great interview, he's spot on about a lot of things, esp. therapy. I'm thinking most of us look particularly uncool trying to eat pasta ... well, at least this messy Italian gal does!! o__O
Last edited: Nov 8, 2014
[SIGPIC][/SIGPIC]
A

Anonymous said:
He was in Stockholm to see a cancer specialist and when you are somewhere for that reason the attention you normally cope well with can be overwhelming. I can even name the specialist in question but out of respect for Moz and the specialist I will not but it caused a stir among the young nurses.
Click to expand...

Thank you for not saying any more than the above.
You must log in or register to reply here.