Morrissey in Skopje, Macedonia on October 16?

From comments posted by Noel Westlake and Anonymouswithapologies, it appears the concert plans for Skopje are off.


An anonymous person posts the link: 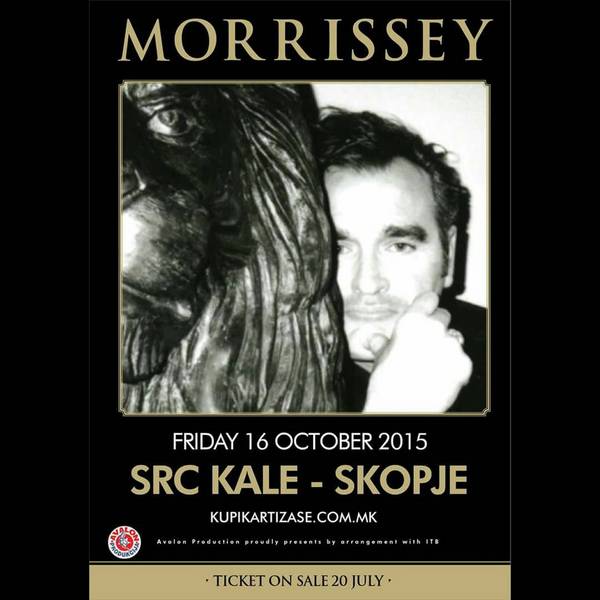 "The Lazy Sunbathers" has lyrics which pefectly summarise the Greek crisis & likely war between Greece & FYR Macedonia/Turkey if Golden Dawn topple Syriza. No idea why Morrissey doesn't max the goldmine of his catalogue to comment on current affairs. Genius track, one of the classics that can never be crashed into ridicule by bizarre outbursts about Royals=3rd Reich. As the rest of the world realises the ECB is a proxy German War Machine consisting of BanksNotTanks, it's desperate to see Morrissey banging his head against the brick wall of the British Royal irrelevancies when some of his global audience are in conditions of such insecurity and would find comfort and strength in a set-list that addressed their lives, not just his parochial fixations. But, I guess, "World Peace Is None Of Your Business". Assume Athens/Thessaloniki are also on the road plan. It might still be very hot there in October, in fact the whole place may go up in flames if somebody doesn't throw a bucket of freezing water on Merkel & Schauble. Whatever, it's only *pop music*, isn't it?

best
The Ghost Of BrummieBoy
looking at a map of the Cyclades....


Last edited by a moderator: May 15, 2016
Enjoying Morrissey's fall from grace into ignoble ignominy!

The promoter for Avalon has since posted this on Facebook:

I think it translates as:

Respected ... 15 minutes ago we received notice from London to announce the Morrissey concert in Skopje off. That's what I do.

Morrisseys artwork has been absolutely vile recently. The image above with the lion is just lazy crap. I really hope the fans get on board and get their creative juices flowing in order to come up with some challenging, thought provoking artwork for the new release of
Kerrygold.
We know they can do it just as they did with videos for world peace on u tube, personally acknowledged by the man himself doffing his cap.
Let's get back to the old ways when the artwork was just as important as the songs .


Noel Westlake said:
The promoter for Avalon has since posted this on Facebook:

I think it translates as:

Respected ... 15 minutes ago we received notice from London to announce the Morrissey concert in Skopje off. That's what I do.

If this is true it's a terrible start for the Kerrygold promo tour ! It's gotta be wind up.


Harvest for the world : The Islay Brothers
Take a chance on me : Abba
Violater : Depeche Mode
Dairy days : Bruce Springsteen
I beg your pardon I never promised a meat free square garden : Lynn Anderson
Give pizza a chance : John and Yoko
Gypsies tramps and cheese : Cher
Like a vegan (but not) : Madonna
I can't go back to dairy now : John Shuttleworth (John Shuttleworth on the Yamaha )
The great pretender : The Platters
I veal love : Donna Summer
Would I lie to you : Charles and Eddie
For Nandos : Abba
The Plaice I love : The jam
Humasexuality : Billy Bragg ( also featuring on vocals/guitar )

Morrissey will only be signing copies of Kerrygold purchased in store on the day.

Any artwork for Kerrygold should be submitted to Morrissey-solo by the 28th July.

15 minutes ago they got the report from london to withdraw an annonuncement for concert in skopje.

person named boban miloseski took all responsibilty for the situation, to prevent possible negativities and speculations. he apologises to all.

p.s. my comment: boban has never been here, for sure

still tickets for London, but be quick!