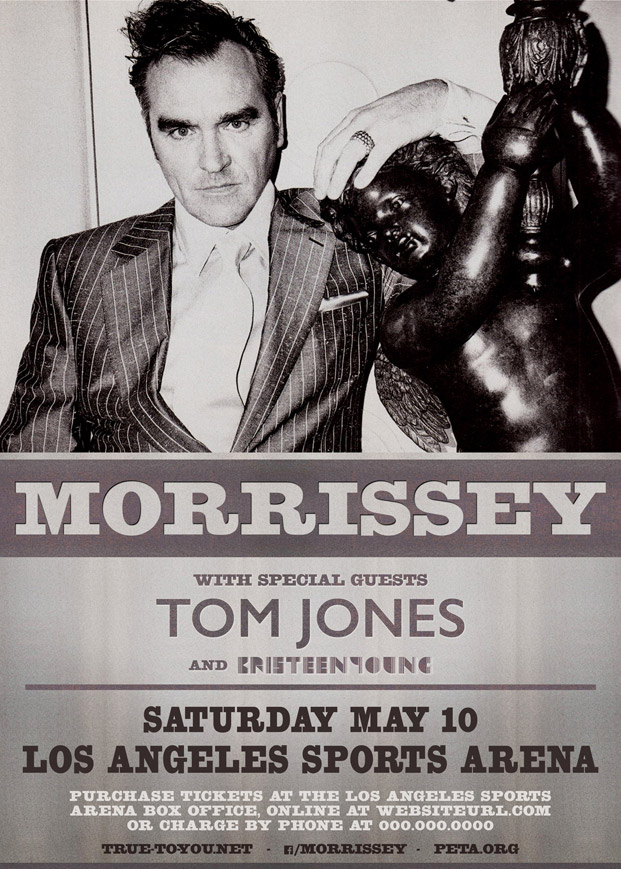 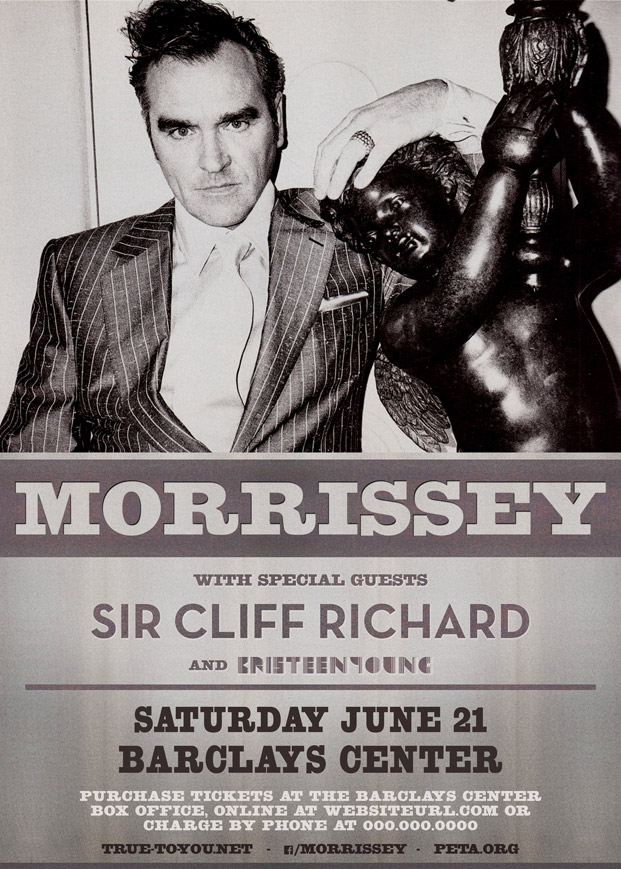 Re: Morrissey tour datesorted by tom jones and cliff richard

David can you please edit the title of the thread, thanks
Re: Morrissey tour datesorted by tom jones and cliff richard


mozsupportsrovers said:
David can you please edit the title of the thread, thanks
Click to expand...

His special guest are truly...special guests.
going to try and get tickets for L.A!
Oh. My. God.
We Both get stuck w` Kristeen Young again (Why ,Why ??)
L.A gets Tom Jones ,we get Cliff R who has perhaps 2 songs we will know .
Great picture from the "Quarry" days !
Last edited: Feb 13, 2014
What does Kristeen Young have hanging over Morrissey? Photos? Video?

Tom Jones, an inspired choice--don't know much about Cliff Richard.

The question is: Will we have new studio music before these dates?
Re: Article: Morrissey in Los Angeles (May 10, w/Tom Jones), Brooklyn (June 21 w/Cliff Richard) - TT

So, here we go again with the sad opening act. Will we be subjected to the same garbage songs hacked by Tobias and company? Meat is Murder needs to be retired as well as some of the other sorry songs that he has been trodding out in recent years.

Seriously, why not go to the strong songs and really make it a stellar show with Disappointed, National Front Disco, Mute Witness, Frankly Mr. Shankly, etc.

Then we will have the idiots throwing the blue roses around thinking they are all part of some secret society.
Hoping for PHOENIX, AZ and EL PASO, TX dates in between LA and Dallas!!!
Last edited: Feb 13, 2014
Splendid news!!! It's been a long time since Moz's played a big stadium in NY like Barclays! I'm happy for him, it's exciting

And he looks damn gorgeous on the tour poster!
Somebody better finish the poster. websiteurl.com?

Have fun with Kristeen, you two are a beautiful couple. Go one direction Skype with her, maybe you'll get to watch her tearing into some ribs or devouring a chicken while talking shit about you, special girl she is.

Also talking infinite SHIT about royalty then honoring their fucking phoney SIR is like referring to a cow as SIRLOIN. You're blatantly acknowledging the thing you hate.
Last edited: Feb 13, 2014
Re: Article: Morrissey in Los Angeles (May 10, w/Tom Jones), Brooklyn (June 21 w/Cliff Richard) - TT

There's nothing listed on ticket master other than the cancelled Richmond date. Does anyone have any idea when these actually go on sale?
Re: Article: Morrissey in Los Angeles (May 10, w/Tom Jones), Brooklyn (June 21 w/Cliff Richard) - TT


Chip said:
There's nothing listed on ticket master other than the cancelled Richmond date. Does anyone have any idea when these actually go on sale?
Click to expand...

I can't help thinking that this is the push for acceptance into the pantheon of Grand Old British Singers, that the Matt Monro and Al Martino-a-thon hinted at. We're going full crooner. Anyway, a while go, those Danish janglers Northern Portrait did quite a nice version of a Cliff Richard song...

P.S Just how long does one try to convince the public that Kristeen Young is on the cusp of the Big Time?
Last edited by a moderator: May 15, 2016
This fucked up eyeballed judge with the shitty make-up selected SKY as the champion at the dog show this weekend. It's written in the stars. Hopefully she gets full honors at the fake-as-shit Grammy Ceremony some day like she deserves. Gross. Go pound your fuckin' IVORY somewhere else, I won't give her a DIME of my money.

https://vine.co/v/MWEPWqpqpmQ
Maybe I'm a huge crowd of Peruvians angry that SHE fucked it up with her big attention-seeking mouth. "Look at me! Feel sorry for me! Let me say whatever I want!" CANCELLED. We all know that's what happened, food poisoning MY ASS. Their faith needed to see Morrissey sing and instead they got her fucking manipulative bullshit. It'll keep happening. She's toxic.
I think a new date in the UK will anounced, with guest star Engelbert Humperdinck

' and they say he's mentall' ... 1 duet would be nice or 4, but a whole gig before Morrissey, I think a lot come in late, not talking about Kristeen...why she again?
Last edited: Feb 13, 2014
Go change the world with her, Morrissey. Go make the world a better place and effect POSITIVE change where women can show their tits in public and the failed Europeans that are Americans are able to get abortions (unless you're Catholic then lots of phony love) and the woman setting the stage for your show glorifies spousal abuse because at he end of the day it's not about the music (that a lot of people hate) but it's about boosting the self esteem of a manipulative little shit, a spoiled brat who fakes her stories and hates her parents and who has you wrapped around her anorexic finger. Go. Have fun. Kristeen, you're so beautiful, you're so talented, you're so misunderstood. THere, I got it out of the way. Fucking waste. I'll stop now. I'll go away.
Re: Article: Morrissey in Los Angeles (May 10, w/Tom Jones), Brooklyn (June 21 w/Cliff Richard) - TT

At first glance Cliff Richard seems an odd choice, but both he and Morrissey are famously NOT homosexuals hiding in the closet, despite all the rumours, so they have that in common.
Re: Article: Morrissey in Los Angeles (May 10, w/Tom Jones), Brooklyn (June 21 w/Cliff Richard) - TT

Once again, one of Morrissey's ideals contradicts itself. We are to believe that Morrissey abhores the UK Royal Family - yet here he is flaunting it and supporting it's very tradition - by choosing one of it's exhaulted minions, 'Sir' Cliff Richard as a support act? I think, Morrissey, you really do need to read your own 'small print' and stop 'cherry picking' - have a backbone and stand by your moral convictions. As a 'Sir', Mr Richard (as does anyone who accepts such vile 'gongs': CBE, OBE etc., from this despicable power-base), defines the very notion of class segregation. Anyone that is fooled by "they will use their 'gong' for a common 'good'" is pitifully deluded.

That aside, Mr Richard is also an incredibly mediocre artist and has been since Move It.

In future, Morrissey, please read your tirades against the Royal Family. Let what you have written sink in. Take time to understand it ...... and then, act upon it consistently.

Disappointed, but sadly not surprised.