Central posts a caption and URL which links to the following story: 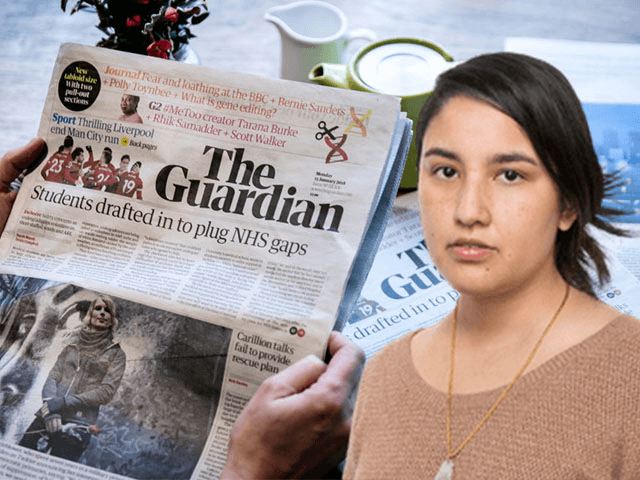 The person cited tweeted on October 27 about Morrissey:
(In direct response to that shirt as also highlighted by The Guardian).
Regards,
FWD.

Uncleskinny said:
Sticking up for Breitbart? f*** him. Is there anyone left who doesn't think he's a far-right apologist now? The evidence is right above you. On a broader point - his source of information is so narrow, so pointed, that he thinks everything else is a lie and the enemy. Imagine. Imagine being that isolated - surrounded by people you've paid to tell you you're right...

Anyone who thinks otherwise might like to go to this event featuring some of his favourite people. 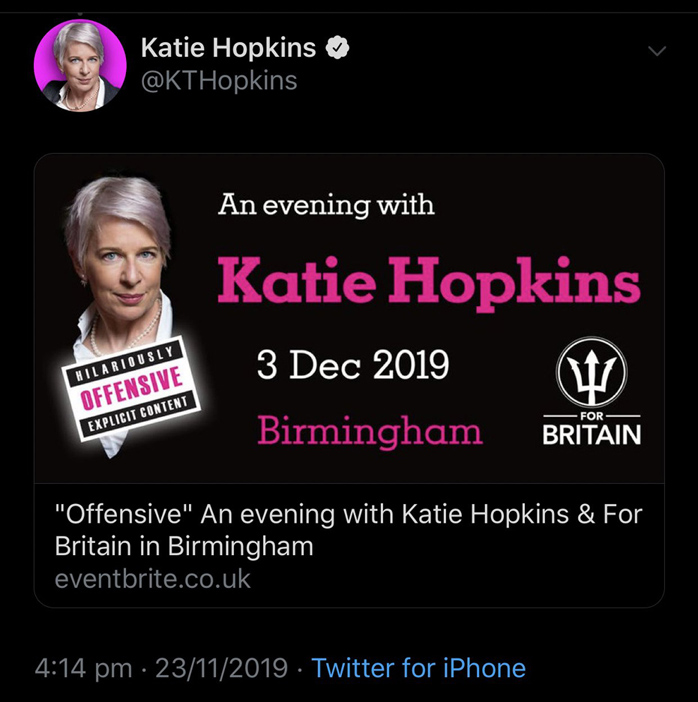 Skinny I know you would side up to this lowlife. Left Lies as good as you

I hope so. Anything to irk the Guardian
and the haters on here.
E

Do you mean censor?

‘Morrissey often takes a sentence and runs with it until it stops making even any grammatical kind of sense.’


Anyway, He’s not supporting anyone, he’s just pointing out the workings of The Guardian. I mean, where’s his Breitbart badge?
Click to expand...

No, I don't mean a censor. I mean an editor, which all proper writers have, even James Joyce had.
D

Nerak said:
Heterosexuality does give him the horrors - probably worth remembering that he loves camp surrealism though. And that often his hyperbolic disgust is comedy. I like List of the Lost because I love Wilde, Firbank, Orton & I know the tradition he was writing in - fey decadence. The sex scenes were meant to be funny.
Click to expand...

He could well be homosexual.
P

When Skinny gets too old to type, this cretin can become the new mod.
P

Skinny, censor is what you meant, dont be silly.
A

When you turn left, you find more spin coming from the gin in this thread and forum.

Consider the source: The Guardian.

Anonymouswithapologies said:
i agree. his name and acts are welcomely misused.


you canNOT know what he thinks, you can only guess

blatant points like this are left for use to those who were let to 'make you feel that your mind isn't your own'.
Click to expand...

That seems to be "Skinny's Superpower" he knows the thoughts of everybody. Destined to the rubber room.
P

Nerak said:
You all probably know this one - but I found a great book on Morrissey's art - The Pageant of his Bleeding Heart by Gavin Hopps. It's an academic close-reading of his work & all the antitheses that he manages to hold together. If you're miserable that he's in disgrace it might cheer you up to have it confirmed that he's a great artist.
Click to expand...

Ok Skinny.
Will pick it up if I ever go to Catholic Mass.

You can be any artists ‘editor’ just by
ignoring their work in the first place.

Anyway, what’s a ‘proper writer’ and what is an artist?
E

Sinne you obviously know nothing about editing, here's a nifty article about it from your favourite newspaper.

Is Morrissey a ‘proper writer’ or is he an artist ?
A

This is the a member of the New York Times editorial board. Reminder you are allowed to be as racist as possible against white people and ONLY white people.
Click to expand...

What a nasty lil' biatch.

Anonymous said:
When you turn left, you find more spin coming from the gin in this thread and forum.

Consider the source: The Guardian.

Eldritch said:
Sinne you obviously know nothing about editing, here's a nifty article about it from your favourite newspaper.

Some clueless editor who doesn't understand the poetic and artistic appeal of List of the Lost as it is swooping around with a red pen and making the sentences short and palatable would deprive List of the Lost of all of its charm. Editors fix unintentional gaffes. It seems like you want the whole book reworked so it could be more accessible.

I don't think grammar and punctuation are important in any instance outside of a classroom setting. As long as you're understood, (and grammar and punctuation are just paint-by-numbers type tools to aid with understanding) I don't believe they're necessary.
In fact, I think it can be quite beautiful and quite necessary to toss grammar and punctuation into the hog pen. First, you have to establish your mastery of these rules before you break them, just so people don't accuse you of being ignorant of them. Picasso, in his early career, painted humans that actually looked like humans, so people knew he had such capabilities when he transcended into cubist hallucinogenic masterworks which intentionally defied the traditional arrangement of the human form. They knew then that the defiance was intentional. The same applies to writers who want to discard syntax and simple rules. It's a fantastic, deliciously post-modern and meaningful stylistic choice that can make a reader really work for their money... which can only be a good thing to my humble, avant-garde little mind.

Since we're recommending readings- your article reminded me of an essay you might find interesting (also by Franzen):
https://adilegian.com/FranzenGaddis.htm

Anonymous said:
And so even the thinned veil falls. Morrissey now defends Breitbart in order to attack The Guardian and posts it for all the world to see. There have been concerted efforts within this forum to promote alt-right ideology and also apologist rants supporting alt-right, convicted paedophiles. It seems Breitbart agrees. Morrissey is an alt-right mouthpiece and I am ashamed that I was once a fan of this stupid, hateful man.

According to hundreds of emails by Yiannopoulous leaked by Buzzfeed in late 2017, Yiannopoulos repeatedly solicited white nationalists, such as American Renaissance editor Devin Saucier, for story ideas and editing suggestions during his tenure at Breitbart.[12] The emails show that this was an effort to appeal to a racist readership through dog-whistling .....

Yiannopoulos has been accused of being an apologist for or supporting paedophilia. The allegation arose from several video clips in which he said that sexual relationships between 13-year-old boys and adult men and women can be "perfectly consensual" and positive experiences for the boys"
Click to expand...

Well, no it doesn't. Because all the online blogs are in the same clickbait business & every one of them has dodgy story sources, scandals in the editorial staff & use tribalism to get hits. Trying to link Morrissey to paedophilia is a pretty grotesque form of guilt by association & does rather undercut your moral high-horse.
Last edited: Nov 25, 2019

Doctor Tom said:
He could well be homosexual.
Click to expand...

It may be likely.
A

Uncleskinny said:
his source of information is so narrow, so pointed, that he thinks everything else is a lie and the enemy.
Click to expand...

Are we talking about Guardian or Breibart readers? Seems to me they are both as blinkered and politically narrow-minded as each other. Anyone not in line with The Guardian is automatically branded a racist enemy and targetted for deplatforming and cancellation. Personally, I wouldn't trust either side right now, as both extreme left and right wing come across as narrow-minded bigots.
A

Breitbart??? When you thought he cannot go any lower ...
You must log in or register to reply here.

A
"Bigmouth strikes again and again: why Morrissey fans feel so betrayed" by Tim Jonze - The Guardian
11 12 13