Hey just so you know, here is the police version from the italian newspaper "La Repubblica":

They claim Sam was driving on the wrong sense at "full speed" and that they stopped him - apparently scared for the threat of a car driving at full speed in the wrong direction - to ask for his documents first, and then Morrissey's.
The article continues:Morrissey was asked four times for a document, but instead of telling them he left the wallet in the hotel he told them he did not do anything and did not had to deliver his document.
Than Sam proceeded to take a photo of they guy (who in the meantime googled Morrissey and realised who he was) and told him "you're going to be famous".
Apparently, both the policeman (whose photo was published) and the italian police want to sue Morrissey, the articles concludes.
The officer claim he never pointed the gun.

Adding the police statement (from a newspaper) I just found

«The car was proceding from Via della Frezza on the wrong direction, tuesday late afternoon, and came into a very crowded (because of the sale week shopping) via del corso. The agents on the "nibbio" motorbikes, who are regularly patrolling the historical center because of counterterrorism measures, did not hesitate to stop the car and ask the people on board for their id». According to the Questura after the first check «the policeman issued the ticket to the driver, who admitted his responsibility - according to the violations commited. But the other person - in other words the singer (exactly like this in the police memo - hilarious ) - has been hostile since the beginning: an english citizen, he insisted saying he could not be forced to produce his ID or state his identity because he commited no felony, and was very surprised he wasn't recognised by the policemen. After some persistence the agents, who spoke english, allowed the person to call the hotel twice, thus learning the man's identity in order to run further checks even in the absence of an ID. During the checks the artist, bothered, shoot some pictures to the policeman threatening “you will become famous”».

Sorry for the translation, but police statements are written in a strange funny language


Update:
SER has just written in his facebook page (comment in the same photo post) it was not him driving the car and he was not in italy at the moment. What the hell?

This is getting more and more ridicolous.

"The Italian newspapers state, on behalf of Roma Polizia, that the driver of the car was Sam Esty Rayner.


Scan of print edition from Betta: 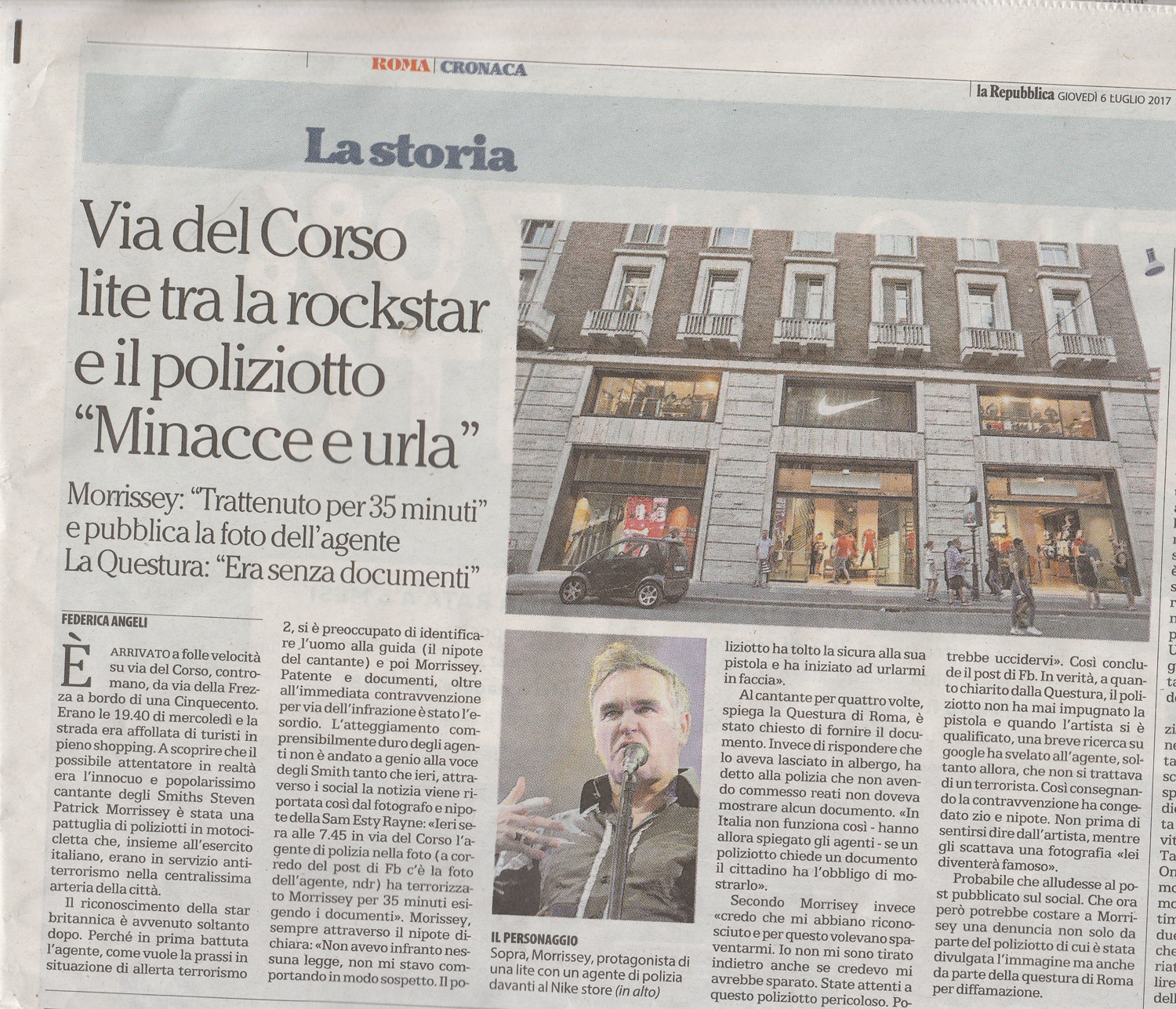 DavidK said:
You see you still don't get it.

'Like.. Why did the cop have his hand on the gun ready to kill?'

Again, you are taking Morrisseys' word for it. Is there proof the Officer did this? Does Morrissey have the ability to read minds? Does he know the officer wanted to kill him? Where is the proof of intent, or whether he pulled out his gun at all? All we know so far is Morrissey omitted some very big details before the whole story leaked. That is tantamount to lying so how can we trust him? The officer has everything to lose by lying. Morrissey can lie to the public without consequence apparently.

You bringing this up over and over is just being over dramatic to fit narrative, and you lose all credibility... Just saying. After all Morrissey didnt actually say the officer pulled out his gun, he said he unlocked it and put his hand on it. As a former officer, let me explain something to you. If you make a lawful request and a person becomes beligirent and aggressive., that person you are dealing with is probably either mentally ill, unstable, or generally guilty of something. 99% of the people police deal with are the dregs of society. It is not all rainbows and unicorns believe me. One of the first things you are taught during use of force training is that if a person is willing to argue/fight/start an altercation with a policeman, that person has nothing to lose. And if there was recent terror attacks involving cars and I just pulled over a stampeding vehicle with a foreigner speaking a language I didnt understand, and who was being hostile with me, clearly a policeman, MY LIFE could be on that line. Words can only get you so far. I, ME, at the end of the day with my modest pay, want to go home safe to MY family. If I have to put my hand on my holster to say in the universal language 'back off', that person must be pretty ##@$%$. If a police officer gets attacked and god forbid they lose, they are DEAD. Let that sink in.
Click to expand...

'Does Morrissey have the ability to read minds? Does he know the officer wanted to kill him? Where is the proof of intent, or whether he pulled out his gun at all?'

Yes true, but one must have their reasons, can't speculate why really. Lying? I wouldn't call it the same.

'After all Morrissey didnt actually say the officer pulled out his gun, he said he unlocked it and put his hand on it'

yes, true, And that is enough, that is a threat and intent to show that you will shoot to kill.

'99% of the people police deal with are the dregs of society.'

Is that how cops feel about the people they are 'serving' ? Ever wonder why
cops get treated like crap if they treat people like this? less than human?

'I, ME, at the end of the day with my modest pay, want to go home safe to MY family.'

Who doesn't? Though if you care about your family so much, then maybe you should have thought of a different career choice rather than following in your daddies footsteps. f***ing logic, 'Let that sink in.'

Anonymous said:
Why does the sun go on shining?


Why does the sea rush to shore?

Why do the birds go on singing?


Why do the stars glow above?

Why does my heart go on beating?


Why do these eyes of mine cry?
Click to expand...

And why the violence and pointless deaths of so many innocents by the hands of the police?

Grendelica said:
Of course I was not transalting word by word, but the article you linked it's not the one I translated, which is still linked in the post above.

(About the photo) now it may cost morrissey a denuncia per diffamazione (for libel I suppose) both from the policeman in the photo and from the questura.

It is obviously a conclusion of the journalist, on a second read, but I guess it may have been different first time I read it ( there is also an added conclusion on the canceled concerts). Anyway, it's about the photo not the gun and I hope it's clearer now.
Click to expand...

bhops said:
You know he just LIVES for this shit, LOL.
Click to expand...

Yeah he'd have no reason to get out of bed if it wasn't for bullshit stories like this. He's a sad dude.
"It's not your bidet anymore."
A

Surface said:
Thanks for asking Benny - yes all's well, how about you? -Am 3 nights into New Orders 5 night stint at the Old Granada Studios, you can't get to much of a good thing!! Morrissey should think about different approaches such as this -

"the group will be deconstructing, rethinking and rebuilding a wealth of material from throughout their career: familiar and obscure, old and new. To perform it live, they’ll be joined by a 12-strong synthesiser ensemble from the Royal Northern College of Music, with Joe Duddell providing the orchestrations"

75% of the set is made up of songs that they haven't played for 25 to 30 years along with some Joy Division stuff that they have never played such as Disorder - The whole thing is a wonderful audio and visual spectacle.

Do you know what ! Watching that made me think !
What a cool place it is we live in

We've produced some great musical history in this neck of the woods.
Dance your legs down to their knees like there is no tomorrow for the rest of the gigs Surface.

We need to know exactly what happened.

The suspense is terrible.

12" on the slack said:
We need to know exactly what happened.

All ports and airports have been put on alert.
Finding Diesel is the key.

Anonymous said:
I heard that the police officer is really upset as he is a big Morrissey fan who would have attended all of Moz's seven concerts.
Click to expand...

Mozzarella. He's a big mozzarella fan. And who can blame him?

yes, we could all joke, until it happens to you.

A cup of tea

Ketamine Sun said:
yes, we could all joke, until it happens to you.

My thoughts and prayers are with Morrissey during this difficult time.

Anonymous said:
Do you know what ! Watching that made me think !
What a cool place it is we live in

We've produced some great musical history in this neck of the woods.
Dance your legs down to their knees like there is no tomorrow for the rest of the gigs Surface.

Yes the whole thing is brilliant and lasts 3 weeks. New order played Castlefield Bowl as part of last years event, this year James played the bowl so its a fantastic celebration of all the music/arts across Manchester. The New Order gigs are simply superb, have never seen a 12 piece synth orchestra play before, they are all behind slats which open when they are playing parts. Would be great if Morrissey took part in one of these but the bands are giving something back to the city, so not much hope of that.