Ketamine Sun said:
so I take it then you’re not a fan of LOTL ?

For me it's the same as with Autobiography - there's so much fascinating stuff in it once you get past the illusion that it's supposed to be a "novel".
It's less accessible than Autobiography and it took me two readings to "get" it, the first of which was rather frustrating and strenuous, but it's brilliant in its own way.
I wish Morrissey would have taken the time to discuss it in depth with someone when it was first published. There's a couple of things I would love to hear his thoughts on.

I won the mums!

I adore the solo version of this song. I just can’t get into the duet version, for some reason I just don’t care for it.

Taken from Autobiography... interesting if you are not already familiar with the backstory of Interlude.


I do not know Siouxsie, but I ask around to see if she would have any interest in dueting with me. Her manager responds, and I send her four covers to choose from, being Happy (Nancy Sinatra), Loneliness remembers what happiness forgets (Dionne Warwick), Interlude (Timi Yuro) and Morning starship (Jobriath). I call Siouxsie at her home in Condom in France, and each time she recognizes my voice there comes a small, impatient sigh as if I’d just interrupted her evening prayer. ‘Can’t we do something off Ziggy Stardust, like The prettiest star ?’ she suggests.

‘The prettiest star wasn’t on Ziggy Stardust,’ Mr Know-all returns. Siouxsie stiffens, and we shall never be friends. She is very much as I had expected – a physical blancmange that is six parts Kate O’Mara, two parts Myra Hindley and two parts Fenella Fielding. She had replaced Croydon for the Black Forest, and she appears to hate even the people that she likes. She looks at everyone and everything only with a sense of what is due to her, and she might stare you out as you lay dying on a zebra crossing. She is certain that her historical value outstrips Queen Victoria’s (which, in my meager opinion, it actually does), and she has a duty to no one. Not for a moment will she forget that she is Siouxsie, who might pick fights with people whom her male friends would then beat up. Your mind’s eye can see her in 1972, outside the pubs of Shirley, lines of cruelty already set in stone, full of sexless decorative art, plying very strange cargo – you’re the pride of our street; black magic spun out and on the march – an Eve cigarette held aloft. The overground train to Victoria leaves behind the Oak Crescents and Acacia Avenues of Bless This House and Terry and June, where a better edition of Susan could never be constructed. It was never a question of becoming a pop singer, more a matter of entering the field of argument; a Nico iceberg who hates blasé dolls, and who will be very careful about whom she is photographed with. There are no penetrating opinions forthcoming, but Siouxsie the star is embarrassed by women, and possibly angry because she is one. What slips out is cultivated offensiveness and, thankfully, a stabbing trail of quite outstanding recordings as Siouxsie stomps through with zero emotional involvement and maintains this indifference for twenty very successful years. Siouxsie doesn’t mind if she poisons the world, and here lies the appeal of the one who had said No as the millions of Yes girls smiled their way into the Top of the Pops cameras. The music she makes is a strict ice-bath of nightmare and caution, the hanging valleys of Bern – a black-eyed shopgirl hidden somewhere in the whistling cathedral towers of Notre Dame, refusing to be dragged back to Boots the Chemist, where both her shift and her insurance stamps remain.

Siouxsie chooses Timi Yuro’s Interlude, and she pulls up at Hook End Manor recording studio in a black Mercedes. She is carrying her own microphone and she wants to get on with it minus any familiar chit-chat. In the event, she is a seasoned professional of exact run-throughs and topnotch precision. There is only one crack in the alabaster as she listens to her final take and softly asks me, ‘Are you sure it’s OK?’ It is the solitary moment when the Soviet Statue breathes. One can suddenly imagine real blood in Siouxsie’s veins – and yet, perhaps not.

Siouxsie’s manager calls me a few days later. ‘Sioux says I’m too soft on you,’ he begins – inexplicably.

EMI are delighted with Interlude, and there are torturous mutterings of ‘a number 1 cert’. It certainly achieves its aim as a husky Bond theme, with the slipping-away wheeze of dentist-gas.

Suddenly a legal letter arrives at EMI from Siouxsie’s label, Polydor, who insist that ‘at very least this is a Siouxsie recording’, and they would like 100 per cent ownership, which should be released with Siouxsie’s name only. Am I to be spared nothing? Although I had paid for the recording, Polydor do not insist on covering any costs! It is all so typically, typically, typically convoluted crap.

I am now living at 18 Regent’s Park Terrace, half-Camden, half-Regent’s Park, and Siouxsie appears to discuss a video treatment for Interlude. We are gathered with a video director and her assistants, whilst Murray Chalmers makes tea. Siouxsie is wearing reflective sunglasses so that her eyes are not visible to anyone, and instantly her demands are barked out with a voice of punished ferocity. Within eight seconds she seems to have alienated everyone in the room, and as Murray fiddles about with cups and saucers his eyes roll ceilingwards each time Godzilla snaps out her stipulations.

‘Look,’ she says to no one in particular, ‘I haven’t got time for this, I’ve got to be writing some B-sides,’ and we all wonder what on earth she is talking about. The video crew visibly sink as Siouxsie outlines her suggestion for the video – a treatment which sees me walking through a park only for Siouxsie to emerge throwing stones at me, to which I evidently accept. The move is a crafty pecking-order trample that would emphasize Siouxsie’s natural superiority to the world, whereas I, quite clearly, would be seen as a spectacle of misfortune. The suggestion is met by a terrified silence, not least of all because it is delivered with a look of advanced misery from Eve white/Eve black. Aware that she is coming across as a slightly glitzy version of sheer misery, Siouxsie advances to leave – too soon, unresolved, yet getting the drift. On the doorstep she asks me whether right or left would be the best direction to find a taxi, and although her best bet would be left, I suggest she turns right. It is churlish of me, but it is she who has set the pace. I return to the room where everyone sits in a circle, their jaws agape and their eyes sore at the attack of the beast from fifty thousand fathoms. It is disheartening, but there it is.

I piece together the artwork for Interlude, but the ongoing ownership tussle with Polydor means that the release date moves back, and is then shifted again when no agreement can be reached. In the event, EMI unsurprisingly become bored with the battle of the sea goats and Interlude finally escapes amid cloud and heartache, and success is impossible. Reaching number 24 in the chart, it is supported by one solitary radio play – but nothing else, and not even a photograph of Siouxsie and I together exists to rouse a nation.

In the US Interlude receives excitable airplay, but Reprise decides against a domestic release for reasons known only to the silent gods. Sleeve notes for a new Timi Yuro compilation gratefully point out how Interlude had recently become a UK hit ‘as recorded by some miscreant’. I expect they meant me.

Some years later a Siouxsie biography hits the shelves of Waterstones, and alarmingly she gives a highly divergent account of our video meeting at 18 Regent’s Park Terrace, an account which naturally bombasts me with gobbledygook and ignites her own leniency. I am very surprised, and then saddened.

Love it. It seemed to appear out of nowhere when it was released.

I had a close friend, who wasn’t a Morrissey fan, but they were absolutely bowled over by this recording. We both loved Nick Cave too, and for me this song represents Morrissey straying towards the former’s musical territory.

The sleeve was particularly striking because it seemed to hint at a revival for The Smiths’ aesthetic.
C

Hovis Lesley said:
Love it. It seemed to appear out of nowhere when it was released.

I had a close friend, who wasn’t a Morrissey fan, but they were absolutely bowled over by this recording. We both loved Nick Cave too, and for me this song represents Morrissey straying towards the former’s musical territory.

The sleeve was particularly striking because it seemed to hint at a revival for The Smiths’ aesthetic.
Click to expand...

One for the literary legend 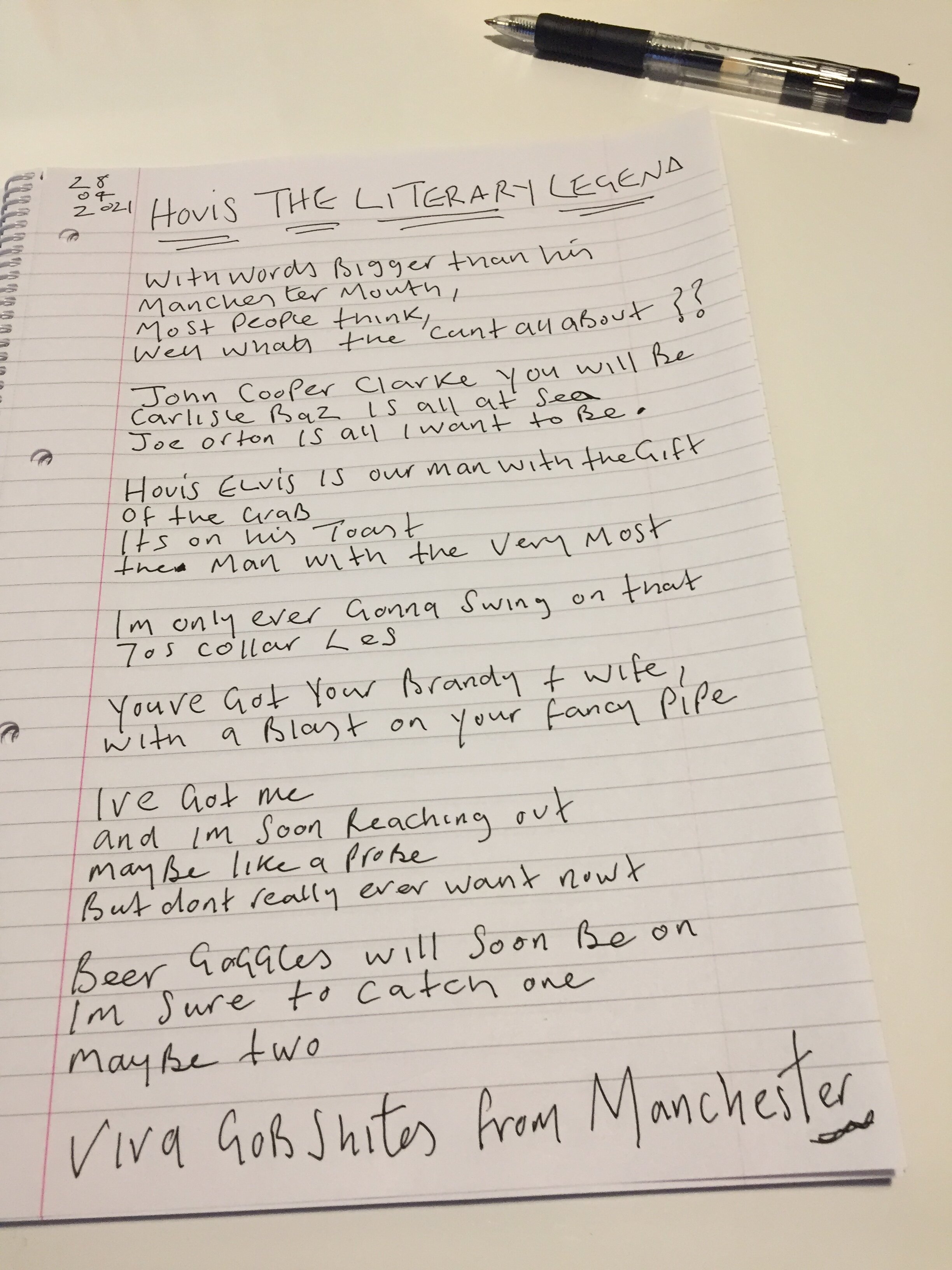 Carlisle baz said:
One for the literary legend View attachment 71594
Click to expand...

I saw John Cooper Clarke with Hugh Cornwell, relatively recently. Are you a fan?

I went to the boozer last Saturday: the garden was half-empty although we had to book a slot. The staff said they were all a little shocked by the low turnout, especially as the weather was perfect.

I think we might have to sink more between us, CazBaz, to help save the industry. We’ve booked again for Saturday coming.
C

I went to the boozer last Saturday: the garden was half-empty although we had to book a slot. The staff said they were all a little shocked by the low turnout, especially as the weather was perfect.

I think we might have to sink more between us, CazBaz, to help save the industry. We’ve booked again for Saturday coming.
Click to expand...

Anyhow if ever our Morrissey paths should ever meet ...
the gallon is on me

I would be taking my daughters, you’ve got a young lad if I remember correctly....

Trans said:
He’s been waiting a long time to cover those songs
Click to expand...

Ketamine Sun said:
so I take it then you’re not a fan of LOTL ?

As a piece of Morrissey's art I find it fascinating! But would it have been published by a decent press if it had been written by a regular author? God no.
A

Southport Grandma said:
Oh the irony given that in the late-70s Siouxsie Sioux sometimes wore a Swastika armband.
Click to expand...

I have to be in the mood to enjoy this,I can take it or leave it.

Morrissey A-Z: "Sorrow Will Come in the End"
2