Morrissey A-Z: "(I Never Promised You A) Rose Garden"

Today's song is Morrissey's live cover of this Joe South composition, included on the deluxe edition of Low in High School. The song was originally written and recorded by South in 1967 before being covered by Lynn Anderson in 1970 - and it was her version that made the song a country/pop crossover smash.) I'll put both versions below. 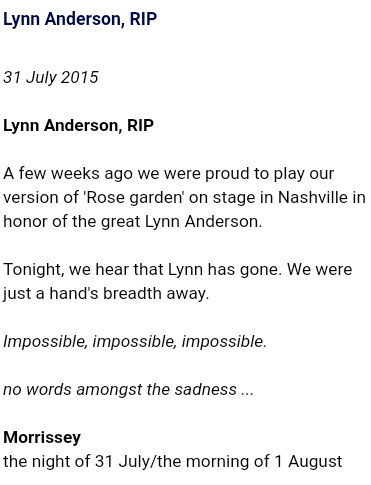 Not a huge country fan, but I liked her version of Rose Garden.
Regards,
FWD.
"You don't know what you don't know... "

I hated this. There are so many interesting songs that would really suit Morrissey in the "country" genre and I wish he had dived a little deeper the way he usually does when doing a cover song. It's a real missed opportunity. He did much more obscure songs on California Son and if he had taken time and gotten some suggestions from people that are familiar with American folk music, country music, and maybe even blues music, the genres that came together to become rock and roll in the 1950's, he could have educated his fans a little and had some great material to work with.
This song is okay. The Lynn Anderson version was a huge hit. But it's really a pop song. And I don't like his performance. I don't understand why this was released. If he wanted to do it live I can kind of see the context for it given some of his problems in the past few years. It fits with "If You Don't Like Me Don't Look At Me," and "All You Need Is Me," so maybe the choice makes sense. But I can't even listen to this.
A

I like this very much and listen to it quite often.


Lynn liked it too.


"I was very excited that he gave the song a "Classic" reading ... as if he was very familiar with my record!

What a very cool compliment! His band did a GREAT JOB! They Rocked The Opry!

"There were days when … all we needed to do was accept, irresponsible acts meaning not very much at all, a disassembled life with
a head full of music and a heart full of hope."​
F

Probably my favourite of the live covers, this suits Morrissey's voice down to the ground.

I personally wouldn't want him to ask other people's advice about which songs should be covered. He chooses songs that have a personal meaning for him which is how it should be. Thankfully he has also tended to stay away from the kitschy songs in recent years and has mostly chosen stuff by respected songwriters and performers.

A fine song and with its sense of sadness there is little surprise that Morrissey would have been taken with it.

In the poll on the Hoffman board it ranked 152nd from 264 solo songs.

The live covers have never been my favourites: they seem to be leading up to the more ambitious California Son and don’t really have much to recommend them, thanks to the limitations of live sound and instrumentation. This is fine, enjoy the little introduction passage, but apart from that, nothing springs to mind. Not bad, just... extremely forgettable, I’m afraid.
5/10

I’m just gonna go right out and say it: this is his best ever cover song. Absolutely magnificent, and it fits him PERFECTLY. The joy he seems to get from singing it is really infectious, too. I’ll love this til my dying days!
"As sentimental as a menopausal woman."
Rifke, 2022.

Gregor Samsa said:
I’m just gonna go right out and say it: this is his best ever cover song. Absolutely magnificent, and it fits him PERFECTLY. The joy he seems to get from singing it is really infectious, too. I’ll love this til my dying days!
Click to expand...

A fantastic song
And excellently covered by Morrissey
D

I listen to a lot of country & folk music, so I love this song.

Subscriber
Everyone loves this song including moi! Uplifting and positive lyrically, and catchy musically. Its just one of those that lends itself to thoughts of nicer times. If you are one of a certain age, it probably has a nostalgic factor as well, no matter who sang it.

Could Moz select wise or more considerate songs of any genre - sure? But he certainly didn't do poorly with this selection as well. And being able to do at the Grand Ol' Opry - was it ever a question?
MrShoes
T

I also listen to a lot of folk and country and dont care for this. It’s a boring choice but sure he does probably pick them for personal reasons. The songs just don’t reach me. With a few exceptions I’ve never cared for his cover choices. I did and do like California son but I felt that since that was an official release his choices were more considered

Are You Sure Hank is definitely more country. This one is fine but easily forgettable.
Nice to hear once (in a while), rarely to return to.

If you grew up in the north west of England in the 70’s you’ll likely know every word of this song. It evokes memories of Spanish holidays, party 4’s or 7’s at family parties and plastic pineapples masquerading as ice buckets.

You had to be there really. I was and I’m sure Moz saw plenty of party 4’s kicking around with this song playing in the background. Hit the north!
M

I can easily imagine having fun with this cover during one of his concerts, such a cheerful and uplifting song. And I really think that Morrissey and band offered a faithful and exciting version of the Lynn Anderson version. But these covers firmly belong to the concert halls for me, I am not a collector of these recordings. For my own listening experience at home, I prefer the more ambitious California Son.
You must log in or register to reply here.

Morrissey A-Z: "When You Close Your Eyes"

Morrissey A-Z: "Never Again Will I Be a Twin"
2

Morrissey A-Z: "This Song Doesn't End When It's Over"