We kick off the C-section (sorry) with this song from Your Arsenal. What do we think of it?
E

Your Arsenal is a curious album. If you heard just the singles, you'd have no idea how good it is. We Hate... and Fatty were almost like novelty singles, and this is nice, but still a bit slight. All the stronger songs were left on the album -- and they make also these singles sound better in context. As for the lyrics... I have no idea really. I can't even understand if by "certain people I know" he means different people in each verse or the same and I have never bothered to find out.

they break their necks
and cant afford to get them fixed.
could be Ms funniest line ever.iv always liked this.good tune,funny lyrics.with the erect nipples it must have been a cold day in callumet park in chicago.
rip roaring,free scoring,never boring,glasgow celtic.
F

Yeah, Your Arsenal is a fine album but you would never know it from the 3 U.K. singles. The first two were so derided that some were declaring Morrissey's career to be entirely over, and this is just very thin.

Musically it is probably the weakest song on the album due to it being a limp Marc Bolan knockoff, and even Mick Ronson's production can't entirely save it.

The lyrics are very dispensable, even if they are amusing in places.

Jack the Ripper on the b-side massively outshines it, and it shouldn't have been chosen as a single.

In the poll on the Hoffman board it ranked 176 from 264 solo songs.

I absolutely love this song! Yes it's lyrically light / meaningless, yes it's a shameless Bolan rip-off but it's just so jaunty and it makes me smile every single time I hear it. Morrissey could sing literally any old crap over this backing and it would still sound fab.
J

Bolan rip off or not, I like it. A pity it didn’t hang around too long in the set list a few years ago.

I actually like the lyrics. A good, yet humorous, take on class and, to some extent, alienation. Musically it’s a brisk, good hearted glam/rockabilly-ish number with a strong vocal melody. It’s miles and miles better than the other two singles (Fatty and We Hate).
"[I call] for every shade and persuasion … we shall always be alongside each other - everyone's culture of value."
- Morrissey, May 2019

Moderator
The Bolan influence was more than musical at the time. Probably helped along by Ronson too. 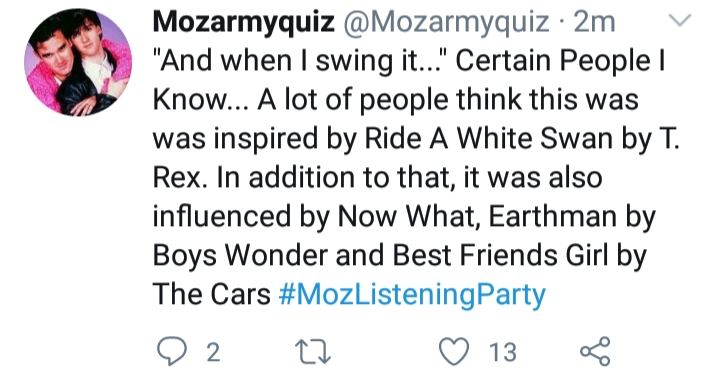 Nothing bad to say about this song as my like for anything rockabilly pre-dates Morrissey.
Regards,
FWD.

(T.Rex art is a RSD later release used for illustration).
Some of us is turning nasty

I really enjoy the song. It’s funny and makes an interestingly amusing point with the lyrics. The music matches his tone and bounces along splendidly. I always thought that your Arsenal kinda had an airy feeling at times and songs like this and hate kinda embody that which I appreciated when next to other songs

As @Gregor Samsa noted, the strongest of the three singles from Your Arsenal. There isn't a whole lot to say about the lyrics, they're slight and ambiguous in a way that was easy to forgive back in those days because the spirit behind it all was just so strong. I love the album track, but the definitive version is obviously the explosive rendition that appears on Beethoven Was Deaf.

The Bolan connection wasn't widely made amongst fans at the time. It's only the advent of the internet that's means that 'everybody's clever nowadays'
T

This used to be one of my favourite Morrissey songs at one point. The great video and Arsenal being my favourite album probably helped.
Still love it, I just played it too often.

I still think the first verse is hilarious.

Subscriber
This is the best! Eminently quotable.

I still got the shirt as well. 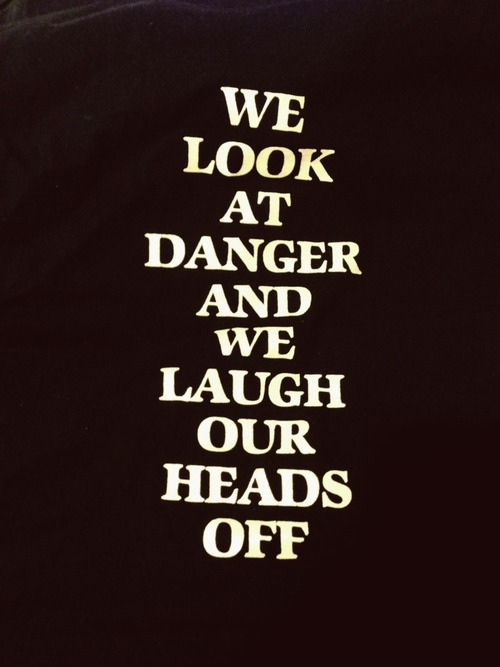 MrShoes said:
This is the best! Eminently quotable.

I still got the shirt as well.

Ah, Mr. Shoes, I see you have also taken courage!

Always! We are Morrissey fans after all!
MrShoes

It's a good example of Morrissey being a bit lighthearted and silly and it working quite well. I was about to say it's the strongest of the YA singles, but I guess that would go to "Tomorrow."

A nice song, very listenable but not very memorable.
"The Smiths were almost like a beautiful painting. Every month you'd add a little bit here and a little bit there...but it wasn't quite complete and it was whipped away." - Morrissey.

GirlAfraidWillNeverLearn said:
This used to be one of my favourite Morrissey songs at one point. The great video and Arsenal being my favourite album probably helped.
Still love it, I just played it too often.

I still think the first verse is hilarious.

Kinda surprised this weren't a bigger hit for Moz.
It's got the catchy jangle tune and it's got the relatable relation
of how ya like certain folks and ya don't like certain others.
You must log in or register to reply here.

Morrissey A-Z: "I Am Hated for Loving"
2

Morrissey A-Z: "By the Time I Get to Wherever I'm Going"
2