The Emmy award-winning host's doctors are optimistic that they've removed the cancer, according to the event's press release, and Bryant is undergoing a six month chemotherapy treatment just to be sure. However, due to his limited insurance coverage, medical bills are continuing to add up. Fans can donate to help via JBTV Health Awareness or Strange 90's: Jerry Bryant Cancer Fund.

"Jerry wants everyone to know that although these obstacles are difficult and there's a lot of trials to come - he's committed more than ever to helping artists and exposing new music," Michael Harnett, president of JBTV, said in a statement.

Strange 90s is taking over Metro Chicago on March 8. Tickets are available for purchase here. so no Morrissey gig, only Matt Walker. Confused how the media [part of the text] they can say Morrissey's performing

Yes I know I have to read well, to start with, glasses might help on tis problem

enjoy the day, all
[SIGPIC][/SIGPIC]

Jerry Bryant is the best. Hope he gets better.

Moderator
I'd guess at Matt doing his Bowie routine.
The billing poster is marketing gold.
Direct donation to the fund for Jerry here:
https://www.crowdrise.com/o/en/campaign/strange-90s-jerry-bryant-cancer-fund
Regards,
FWD.
Some of us is turning nasty

I tried and failed to get into the meet and greet Jerry hosted with Morrissey during the Your Aresnal tour. His show is always weird and wonderful. I wish him well.

hope its a success and they raise a lot of money for the guy.M should appear and sing LOVER TO BE,then again the rodents on here would say he was cashing in on someone elses illness.
rip roaring,free scoring,never boring,glasgow celtic.

NealCassidy said:
Is ‘morrissey’ a band now..
Click to expand...

Hasn’t he always referred to himself and his band as a ‘we’? IE ‘we have a new album ‘ etc.
"[I call] for every shade and persuasion … we shall always be alongside each other - everyone's culture of value."
- Morrissey, May 2019

Matt Walker and the bands he's had over the years have made some great music. The MDR (Most Dangerous Race) had some great songs.
"It's not your bidet anymore."
E 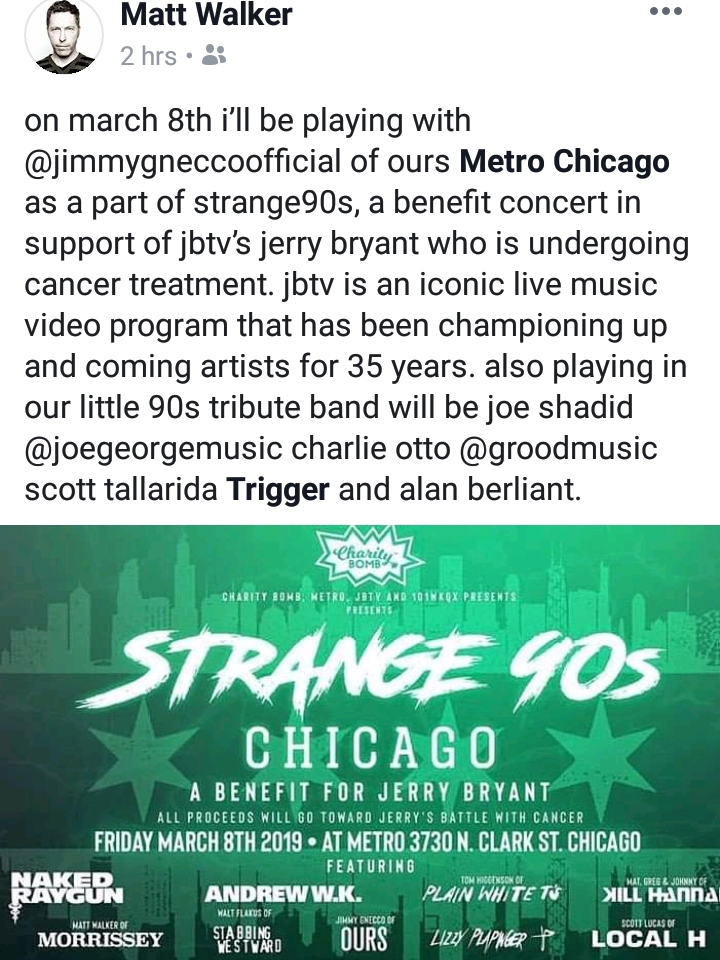 Regards,
FWD.
Some of us is turning nasty