Oh dear:
“his weakest since Kill Uncle”
“the album is often musically splendid...”
5 out of 10

Well, it seems we've already heard the best songs off the album.
"If no one out there understands, start your own revolution and cut out the middleman."

BrummieBoy said:
Who's getting worked up? It's funny. A great start to the reviews. I expect lots more of them to be equally scathing. They have an effect on casual opinion but not mine. I decided the albums sucked after hearing the new songs live at the BBC.
Click to expand...

BREXITEERS OF THE WORLD UNITE AND TAKE OVER!

g23 said:
Do you wonder if we've deliberately been given the best? I'm ok with 5/7 so far. Home is a Question Mark, which people seem to love- strikes me as coming straight out of the recycling until the very end, when it actually turns to something inspiring and grand, and the less said about the overly slick lead single, the better in my opinion. No cojones on that one. I hope the rest is good, but the song titles give me little hope. Also, with it being quite unfashionable to be pro Israel right now, do you suppose it was calculated to make Roger Waters bitch at him in public, thereby raising his profile? No such thing as bad press until the bad press comes. Especially in our age of assumption and witch burning.
Click to expand...

I suppose it's possible but everyone's going to have their own opinions on what the best tracks are. All I know is that even if i don't like the other 5 tracks. I'll still be excited about hearing the studio versions of the other 6.
“I can’t sing anymore, I’m too happy”

Uncleskinny said:
What is wrong with you? You call it gutter press because its a rating you don't agree with for an album you haven't even heard. It never ceases to amaze me how acolytes suspend rational thought like this.

The only thing that matters is the meta-criticism once all the reviews are in. The big picture.
Click to expand...

You're being slightly unfair to whoever posted their comment. He is just saying it looks like the reviewer is out to get Moz from the very start. I began to lose respect for the reviewer at that early point but kept an open mind (i.e. I admit it is possible that the new album is total crap) but find it hard to take any reviewer seriously who then goes on to practically diss everything Moz did since The Smiths. That's just daft. Some of the Smiths songs were great, some weren't. Same for Moz solo. IMHO 'Quarry' and 'Vauxhall' and 'Your Arsenal' were as good as The Smiths. Different, but still great.
We've all had a chance to hear approx 7 of the new songs in various concerts and they sound good to me. I can't imagine that Low will be worse than Uncle.

Anonymous said:
I'm not surprised to be honest as the music on some of the new songs are really bad. I suspect more reviews like this.
Click to expand...

It's funny but I think the new music is pretty good but is sometimes let down by the lyrics :-(
I guess it is hard to know until we've heard the proper studio versions.

Quando quando quando said:
I agree it is unacceptable but it has been published and there is nothing we can do about it.
It's strange though, I mean the journo's opinion about Moz wishing to have died in 1986. And that he should. There is something sinister about it when you think about the glowing review of "Worldpeace" and not any of those derogatory, hurtful remarks.
Click to expand...

Guys, stop being so literal.
A

Uncleskinny said:
I see. Do you also care for comments calling for the hacking up of a Canadian politician?
Click to expand...

If you mean Gail Shea,you need to read what he said again.
Should have gone to Specsavers!

Anonymous said:
If you mean Gail Shea,you need to read what he said again.
Should have gone to Specsavers!
Click to expand...

"Since Gail Shea thinks it is morally correct of Canada to dispense with unwanted beings by slicing their heads open with an axe, hopefully this same fate will happen to Shea, although given her 78% pork girth it could take nine wielding axemen and at least six daylight hours to finish her off.
It shall be worth the wait for all of us."


Here it is, in all it's fat-shaming hacking-up glory. I'm right. You're wrong. What part of that is not hoping she'd be hacked up?

Politic lyrics vs politic review.
After that, he gave a 5/10, not so Bad After all
https://smiths1982.wordpress.com/

Anonymous said:
If you mean Gail Shea,you need to read what he said again.
Should have gone to Specsavers!
Click to expand...

Are you being sponsored by them?
"I love you Moz!" So when did you last see your psychiatrist, hmm?
"Yesterday. She said it was okay. She loves you too oo." 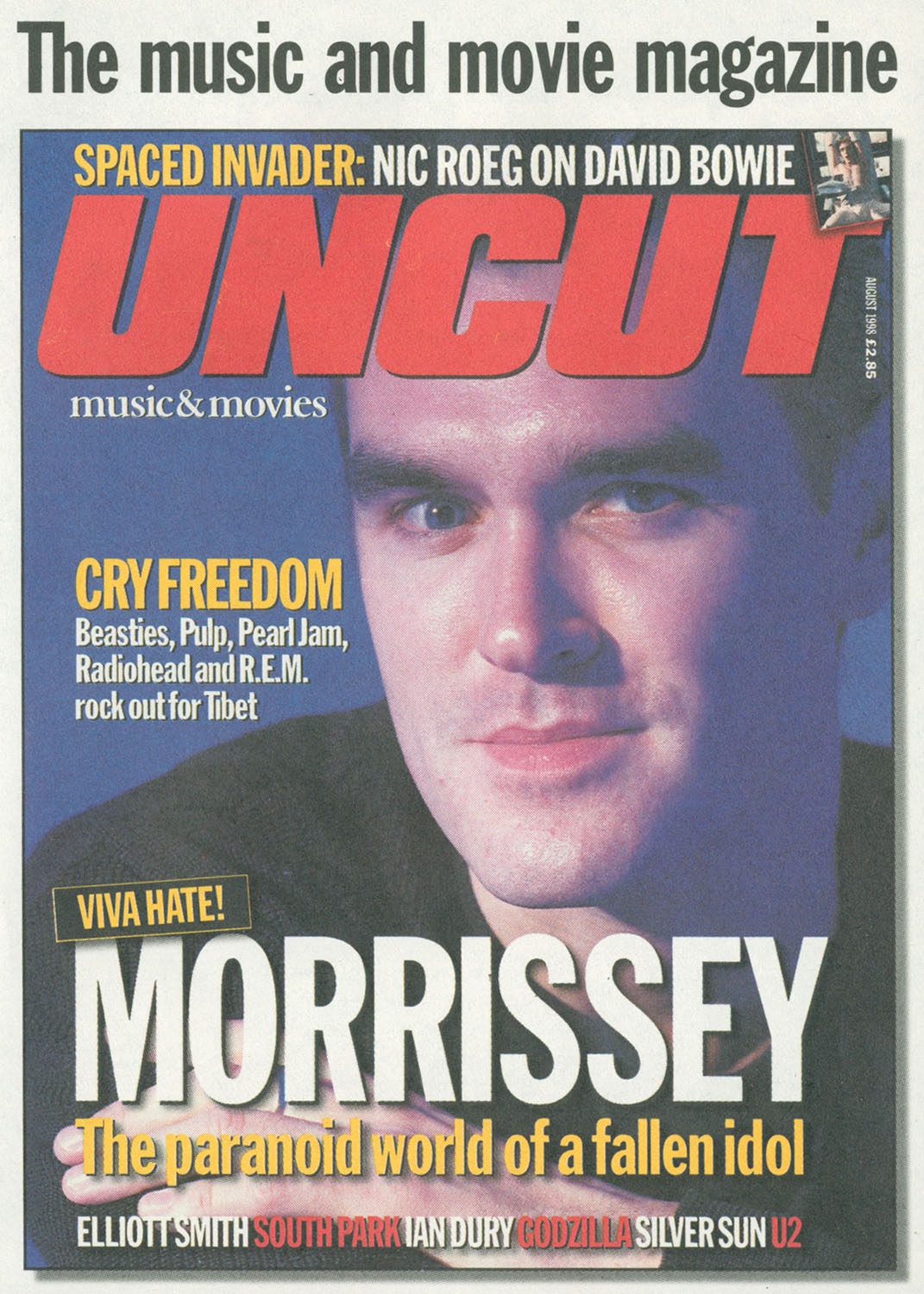 It was pure joy to read this clip from ST.
Since "UNCUT Morrissey-The paranoid world of a fallen idol" (on cover); August 1998 --->>> 20 years after, circle closed with this clip from ST considering UNCUT.
Today John Mulvey is editor of UNCUT; this is John Mulvey review of "Boxers" (1995, NME):
"... just another example of his tedious obsession with bits of rough who'd give him a kicking given half a chance" and that "any enjoyment of his records nowadays is tainted by the fact that a nasty taste from all those obnoxious, apologist, quasi-libertarian quotes still lingers..."
Looks like identical review of LIHS from ST.
"But his (Morrissey) relationship with the UK music press feels a bit witch-hunty to me. I just got hatcheted recently by somebody who wilfully took stuff that I said out of context just so that they had a story—and you can smell it on these guys—so I can imagine most journalists being out to throttle him...",
James Murphy LCD Soundsystem,
Again, pure joy to read this clip from ST about LIHS.
A

Maurice E Maher said:
Yes, critical reception and commercial success do not always go hand in hand. Your Arsenal is a critical highlight of the back catalogue but is one of his lowest sellers. Quarry was the best selling solo album by miles but received very middling reviews. If there are two more big catchy singles that the radio stations pick up on, it is very likely to sell well.
Click to expand...

Your Arsenal was one of his biggest selling albums especially in the US but I do agree with your point . However for me personally the new songs sound really average and the lyrics are shockingly bad . If this was a new artist nobody would care and they would be ridiculed for lyrics . It's easy for the blind faithful to make themselves like this album , it's not drop dead awful just very very average and pedestrian . I guess if you want to like something enough anything is possible .

The opening to this review is certainly misguided, though it should be noted that he is only stating that if Morrissey had died in 1986 his legacy would remain, not that he himself wishes he had died.

As for the review itself, it's reasonable to judge a Morrissey album mainly for its lyrical content as his defining feature as an artist has been his lyrics. I'd already got a 'Kill Uncle' vibe from the other early reviews (mostly good songs, let down by the production and some misguided lyrics) that seems to be confirmed here. Though I've always had a soft spot for 'odd' or misguided albums (Kill Uncle included), so it only makes me more intrigued and eager to hear it myself.

Weakest since Kill Uncle. Yawn. That LP has become a by-word for ‘bad’ Moz albums.

i’d never hear a bad word said about Kill Uncle. It’s unlike anything else Morrissey has done before or since, which is why it’s misunderstood, in my opinion.

It always reminds me of Kate Bush’s Lionheart. A so-called difficult second album that shouldn’t work and had high expectations heaped on it, but is a truly British artefact

The seven songs we have heard so far are good. God damn good. They will sound even better on studio format.

The problem is that most journalists will bash him now even if he released Vauxhall and I number 2, due to his "controversial" views. By the way, supporting someone who fights Islam , a religion that oppresses women, gays and other religions, seems to be the "controversy" here.

And the part he wishes Moz had been killed is just mean and revealing of the journalist's mind. He definitely must be someone into Arctic Monkeys and Tame Impala, truly horrible acts. I know that kind...late twenties, mid thirties...with a long beard eating a burger to make them feel they belong.
A I'm surprised with this score, I'm really invested in the 6 new songs I've heard. Spent the day in bed didn't do much for me initially but has grown on me a lot lately. When you open you legs and home is a question mark sound great to me. Here's how I'd rated the 10 previous albums.

This guy seems really mad at Moz for other reasons.
Don't know what to tell ya, been lovin' all the new
songs and can't wait for the record to drop.

Uncleskinny said:
What is wrong with you? You call it gutter press because its a rating you don't agree with for an album you haven't even heard. It never ceases to amaze me how acolytes suspend rational thought like this.

The only thing that matters is the meta-criticism once all the reviews are in. The big picture.
Click to expand...

The only thing that matters is how art moves each individual.
Don't be afraid to think for yourself now.

Why don't we just get to the root of the problem? We are all holding on (or out) for what once was. Morrissey is not who he used to be and neither are we.
Social Media has ruined Artists like Morrissey because it pulled the curtain back and we started to see a real person and not an enigma. If we are brutally
honest, the Morrissey we all grew to idolize - his last good album was "Maladjusted" and ironically that's right when Social Media started. So by 2004 he
"came back" with an album we were most happy about because he was back. Sure there were some great songs but it was the beginning of the downward
spiral that has taken us to where we currently are. I want to like any new material as much as the next fan, I'm not out to be negative. Spent The Day In Bed
is "catchy" and cool but no where near the days of old. Honestly, the only song that resembles anything close to what once was, is Home Is A ?
That reviewer is probably being charitable with a 5/10 rating. I just hope there are some extra tracks that will be released eventually that are great.
You must log in or register to reply here.