You'll Be Gone / I Started Something I Couldn't Finish / Glamorous Glue / I Wish You Lonely / Jacky's Only Happy When She's Up On The Stage / Kiss Me A Lot / When You Open Your Legs / How Soon Is Now? / Spent The Day In Bed / The Bullfighter Dies / Jack The Ripper / Home Is A Question Mark / My Love, I'd Do Anything For You / I'm Throwing My Arms Around Paris / Back On The Chain Gang / All The Young People Must Fall In Love / Speedway / World Peace Is None Of Your Business / Meat Is Murder / Everyday Is Like Sunday // Suedehead / Shoplifters Of The World Unite

Setlist provided by an anonymous person

no need to run for cover... the nights were vegetarian not vegan...

Even M is human and does his best... as we all should.

Anonymous said:
Its clear that listening to Low in High School leads to people becoming violent.

The CD should included a warning sticker( may promote violent outbursts) or shouldn't be released to the general public.
Click to expand...

it hasn't been released yet.

SuedeMoz said:
Totally agree with your assessment. The Hollywood Bowl has some awesome large screens, why was Morrissey never shown like pretty much every other artist I've seen at the Bowl? I really think it caused a disconnect with the audience since only those with very close seats could actually see him. We really lost a lot by not being able to see his face and expressions as he sang.
Click to expand...

the only recent show i’ve seen there was the cure last year and they did not show robert smith. they only had cameras set at the side of the stage so all you saw was the side of the bassist and guitarist.
A

Mozluv said:
Took My Kids to See Morrissey last night..
For me it was an okay show.. for them.. they were excited to see him Live for the 1st time Together.
The Crowd was not into the new songs what’s so Ever & I’ve seen more energetic shows from him.
I really wished he would of put more of an effort for The Hollywood Bowl instead of his Videos of bitching & complaining. And Seriously.. did he come out last night? Seems like it..
Great to see him announce his Official Day in Los Angeles.. I just thought that the performance would be a little extra special. Hopefully he switches up the Setlist Soon.

Not to worry... You’ll have your choice of 5 cheeses, ice cream and whipped cream as toppings.

10% off for those wearing cashmere.

Bugger off with the half-assed vegan bullshit.
Click to expand...

FYI, plain vegan hotdog was $6, on a different part of the menu. After the concert, saw many people outside the venue consuming those bacon-wrapped hotdogs from the carts as if they were starving!

SuedeMoz said:
Man, very disturbing. I hope someone came to her defense
Click to expand...

I told him to knock it off. I didn’t stick around to see if he did.

SuedeMoz said:
Totally agree with your assessment. The Hollywood Bowl has some awesome large screens, why was Morrissey never shown like pretty much every other artist I've seen at the Bowl? I really think it caused a disconnect with the audience since only those with very close seats could actually see him. We really lost a lot by not being able to see his face and expressions as he sang.
Click to expand...

A camera operative would have cost money. 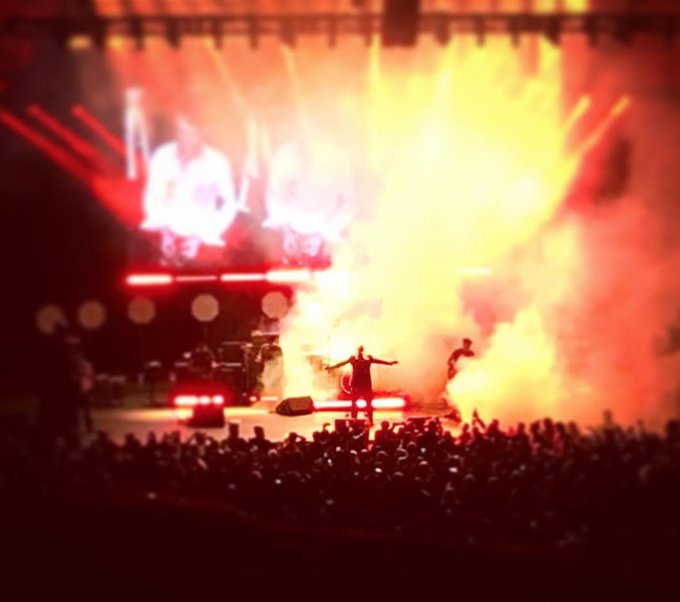 Would make a great image for an insert sleeve or gate fold for a live album release....

BrummieBoy said:
I wonder how long Manchester council will hold out against the mob now that LA has joined Tel Aviv in honouring the Cheez Monster?
Click to expand...

Manchester will never honour Stevo the clown.
We have a new kid in town now. We've taken her to our hearts and made her an honorary citizen. Ariana has done more for Manchester than the fame hungry clown who took the cash and ran away as fast as he could.
Also a nice touch by the city councillors, Tony Wilson posthumously given freedom of the city 3/12/08 (he would have loved that. Cheers Tony

The bar is set too high for the likes of Stevo and his shitty Tel-Aviv key/Crank Hollywood Bowel certificate.

Stevo's only hope of filling the arena would be to get The Smiths back together as a support act.

thanks to mozfreek00
superb.
but whats he whining about at the beginning?
Last edited by a moderator: Nov 13, 2017

superb.
but whats he whining at the beginning?
Click to expand...

Most of his presong banter sounded like incomprehensible jibberish to me.
A

Similar2Sunday said:
there were still fairly long lines at security checkpoints during Billy Idol's set, so I only made it for the last 4 or 5 of his songs. He performed well and still looks quite youthful and in shape. Rebel Yell and White Wedding were especially well-received by the crowd.

Morrissey was in a playful mood the whole night and walked on stage in a sort of silly swagger and began with "On top of the world, ma!!" The band was wearing black berets and shirts with the text "Who will protect us from the police?" (not the Mporium shirt though), leading me to think maybe they would perform the song by that name from the new album, but they didn't.

Just a heads-up for those going tomorrow night.
Click to expand...

Thank You for posting this news, Similar2Sunday.

Orson Swells said:
Where are all the pictures of empty seats? There must be some as Brummie said this tour would be a massive flop and never sell out.
Click to expand...

I KNOW that you are joking, however, Benny/Benjamin/BBB/Anoymous/ is off and currently learning the meaning of life. As well as having some music lessons. I have it on good authority - from his teaching staff - that he will ONLY be back when he can listen to a chord sequence, understand harmonics and count to 6000 tickets.

Don't be upset though. Basically because it is fools like HIM who truly give "this place" such a bad reputation.

Anonymous said:
Morrissey's head of security is a Big Fat American Piece of Shit. He had his hands full handling a 100 lb girl in Portland during the last tour. He last less than 5 mins in Millwall.
Click to expand...

Moderator
A great set of pictures and a review via:
L.A. Record. 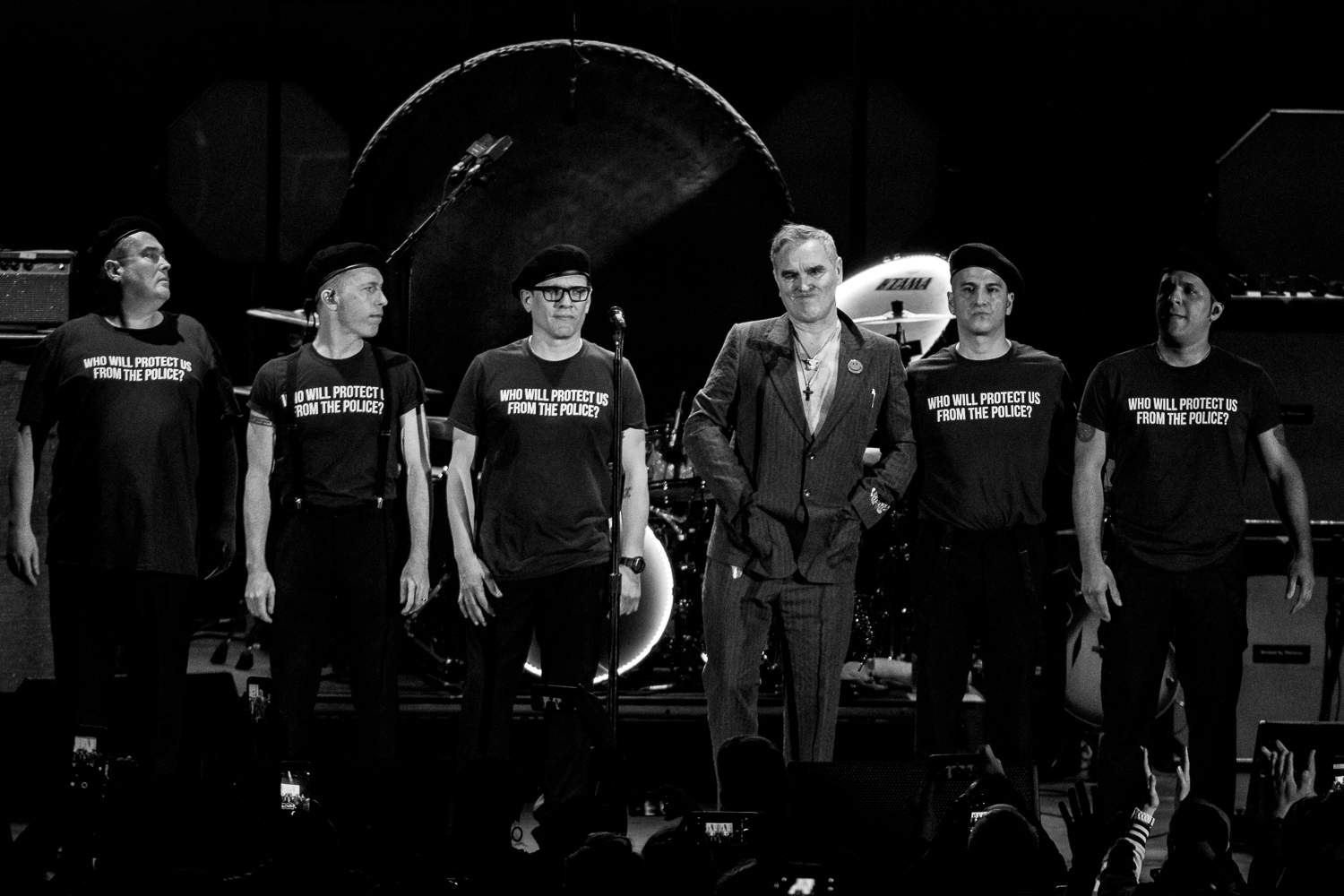 The entire configuration in the front of the stage was changed from the original Ticketmaster seating chart. Which I must say, was quite misleading & sneaky on the part of the venue. The only area to access the pit was Section C in the middle. I bought a Row 1 ticket thinking I had first row, but that became third row after the configuration change. Not the first time this has happened & wont be the last.


I don't really understand how the people in the inner pool circle got their tickets because I didn't see a circle like that when I bought mine. I though Circle B Row 2 would mean that I would be in the literal second row from the stage. There was a barrier and aisle between the first pool row and an inner pool circle that held 2 rows of chairs with about 30 people. The inner pool circle is guarded by security, but if you want a handshake, just wait until he goes to one of the far sides, make your way up there then, and go back to your seat. Just a heads-up for those going tomorrow night.[/QUOTE]
Last edited: Nov 14, 2017
[SIGPIC][/SIGPIC]
December 2, 2009, Oakland, California

Famous when dead said:
A great set of pictures and a review via:
L.A. Record.

Anonymous said:
the only recent show i’ve seen there was the cure last year and they did not show robert smith. they only had cameras set at the side of the stage so all you saw was the side of the bassist and guitarist.
Click to expand...

Sad to have paid a good amount of $ to see this concert and not be able to see their faces. Billy Idol and Morrissey!! Most artists project on the screens. WTH
You must log in or register to reply here.