List of the Lost is available in paperback and ebook formats.

"The theme is demonology ... the left-handed path of black magic. It is about a sports relay team in 1970s America who accidentally kill a wretch who, in esoteric language, might be known as a Fetch ... a discarnate entity in physical form. He appears, though, as an omen of the immediate deaths of each member of the relay team. He is a life force of a devil incarnate, yet in his astral shell he is one phase removed from life. The wretch begins a banishing ritual of the four main characters, and therefore his own death at the beginning of the book is illusory."
Reviews: 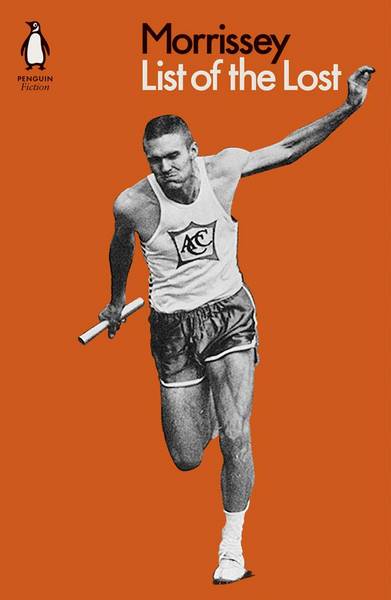 Vile Refusenik · From not Edinburgh, sadly.
the trick is to keep breathing
A

I had no idea Morrisey was into LSD.

List of the Lost written by Morrissey, Directed by David Lynch
S

What the fuh?? Ok..wait what? Kinda wish I hadn't pre-ordered because this doesn't interest me at all..damn moz what's becoming of you?
Last edited: Sep 24, 2015
A

Not entirely out of character. One of the strongest pieces of writing in 'Autobiography' was Morrissey's account of the 'ghost' he encountered on Saddleworth Moors (even though in reality it was probably some poor lost, naked boy he abandoned to his fate, rather than anything supernatural). And with a fetch being a supernatural being of Irish folklore, it's easy to trace this back to Morrissey's background and family history.

Morrissey also touches on a similar idea of a doppelganger 'fetch' in this interview from '89: “Yes, I do believe in the afterlife. I have a very open mind and I have tried a few things. If you stare into a mirror at midnight in a completely darkened room with a candle below your face, your face supposedly changes into a face of somebody who has died and who wants to reach you or somebody who had died that doesn’t particularly want to reach you…It’s extremely frightening because most people’s faces do change automatically and it’s not just a matter of darker shades of moustache.”
A

this does sound like a hB movie horror plot but I like that type of thing. Morrissey if you are reading this be so proud and forget the criticism. You have really been working so hard.
A

I'm kind of impressed that Morrissey went down such a whack path. I can already see this driving those hemmed in by scholarly boundaries nuts.

Subscriber
I'll make up my own mind, but The Guardian are not impressed...

"It’s commonplace in this kind of article to tell you we’re reading the book so you don’t have to. It’s a tease, usually. In the case of List of the Lost, however, it’s absolutely true. Do not read this book; do not sully yourself with it, no matter how temptingly brief it seems. All those who shepherded it to print should hang their heads in shame, for it’s hard to imagine anything this bad has been put between covers by anyone other than a vanity publisher. It is an unpolished turd of a book, the stale excrement of Morrissey’s imagination."

By the way ... I note at the very beginning "The author would like to thank Helen Conford"
The Dailybeast say...

"The writing is laughably clunky, the characters thinly drawn, the style stilted. But what’s worst about the ex-Smiths frontman’s List of the Lost is its repulsive treatment of women."

Tim Burton, is that you ?
A

I've just finished it and got to say whilst hard going at the beginning and he does tend to wander off and waffle about things in more details than strictly necessary by the end I was enjoying it and have to say quite impressed, can see why Moz haters have their pitchforks out for it but people who get Moz will probably enjoy it, not for everyone but I liked it
A

well he would sure do a good job of making the wretch look awesome. i remember when the homeless man stepped out from behind the dinner in mulholland drive. was very creepy looking. he would do a great job of adapting this and with the right screen writer he could easily keep a lot of the language
You must log in or register to reply here.

Thursday at 1:03 AM
JerryCan