LIST OF THE LOST:
UK charts at Number 3! GREAT! 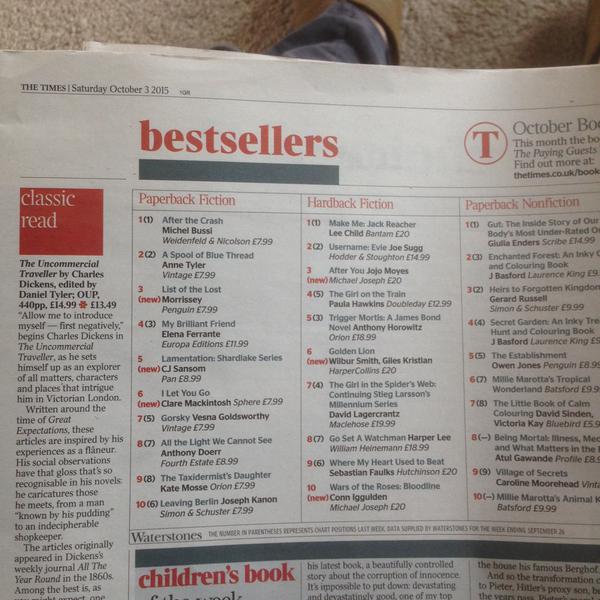 Not a chance. Anticipate a TTY screed complaining that it didn't reach number one and various conspiracy theories as to why by the weekend.

I say this only half in jest.
P

Suck my paperback!
A

it was bound to sell a certain amount just because its him. not bad for a firts time novelist though

jealousy suits you
A

Now that we're starting to see positive reviews, this will continue the rise.

Anonymous said:
Now that we're starting to see positive reviews, this will continue the rise.
Click to expand...

Ketamine Sun said:
He should complain... It SHOULD be No.1. With all theories conspiracy or not... true.
Click to expand...

Do you kiss your mother with that mouth full of bullshit?

Anonymous said:
it was bound to sell a certain amount just because its him. not bad for a firts time novelist though
Click to expand...

im a lover not a hater of the man
A

Uncleskinny said:
Can you link to them please? Also, is there an on-line link to the Times book chart? Ta.
Click to expand...

Why do you need a link? Just look at the heartfelt and positive things being said on this site, by really intelligent people. If you don't think their opinion matters, then in all fairness you can't say your opinion matters either.
2

Two fingers up at all the critics who just wish they could have a #3 bestseller.

Anonymous said:
Why do you need a link? Just look at the heartfelt and positive things being said on this site, by really intelligent people. If you don't think their opinion matters, then in all fairness you can't say your opinion matters either.
Click to expand...

I don't need to repeat what people who are paid to review books think. It is the refuge of the blinkered acolyte to say "I don't care what ALL the critics say, it's what I say that matters", the metacriticism means nothing to them. Heaven forfend that the vast body of critique shatters your image of someone you've so heavily invested in, both emotionally and financially, because after all, you're the fool then, right? You are shown up. Your bubble is burst, and you don't like it. I get that.

Personally, I get that some people like it, and some people don't. I don't care whether you do or not, but is it asking too much for you to actually be honest with your own feelings? I have seen people on here who knew they were going to say it was good, even when they manifestly could tell it was not, just to maintain the integrity of their bubble. That's not honesty, that's blindness. I am saying to you, be honest with yourself. If I thought it was great I would have said so. As would all the critics paid to review books. They didn't. You did. So the question I am asking you is this - are they all wrong, and you right, and if so, for what reasons? Because you can't stand the fact you might not like something, because you are so blinded by adoration that you feel you have to say you like it, or, is everyone else wrong, and you are right? That's why I asked for the links, because I want to see some evidence of this. At the moment, the balance is hugely unfavourable, and I'm asking you to redress it.

Despite what you or others might think, I do not hate Morrissey, I think he has been a genius, but his powers have faded. At the end of the day, he's just a bloke. I wish some people on here could be honest with themselves. And I don't think some will ever be.
A

Hate all you like but nothing will keep a good book down. #Historywillshowthetruth. Bet you 15 to 1 I am proved right.

Anonymous said:
im a lover not a hater of the man
Click to expand...

The 10 most recent reviews on Amazon are all positive, http://www.amazon.co.uk/product-rev...l_formats&filterByStar=all_stars&pageNumber=1

(go to See All Reviews, then sort by Most Recent)
You must log in or register to reply here.