"Let The Right One Slip Off" - A Burlesque Tribute to Morrissey & The Smiths
Friday, May 16th, 2014
Tickets available now (http://www.peepshowmenagerie.com)

I co-produce a burlesque show in L.A. called Peepshow Menagerie and last year we did a sold out Smiths/Morrissey themed burlesque show titled "LET THE RIGHT ONE SLIP OFF". I was a little worried at first about how it would go over, but the crowd was amazing and all the feedback and e-mails we got later (many from people who missed it) asked us to do it again, so here we are as we're about to do it again in May.

A few tidbits about the show: We will be bringing back some of our favorite performers from last year's show as well as debuting many new performances inspired by the work of The Smiths and Morrissey including our first 'boylesque' performance in this particular show. While it may be hard to imagine what a burlesque show inspired by Moz or The Smiths would be like, we found that it wasn't that big a leap with Morrissey writing playful and interesting (one might say often 'teasing') lyrics that inspired many different directions for our performers to take with their acts. While I was concerned how it would go over, being a superfan myself, the audience really got into it and seemed to appreciate that we took the material seriously (even when some of the acts leaned towards comedy). Still it wasn't til talking to the many fans who come up to us after the show did we know for sure how it went over with everyone and the response was fantastic.

Opening the show will be rockabilly band THE TWISTIN' TORNADOS who can also be seen at the 'Ink And Iron' festival this Summer. Fans may also know them from playing at the 'Viva Las Vegas' rockabilly festival.

While the band doesn't start until 9:45 and burlesque at 10:30, we highly recommend that people get there early for the best seating options. While the show is general admission, we will be letting in people who buy advance tickets first (available for purchase via paypal at http://www.peepshowmenagerie.com). Seating tends to go fast and after that it will be standing room only. Peepshow Menagerie is co-produced by Scarlett Letter (former co-producer of The Monday Night Tease) and Chris Beyond (creator of No-Fi "Magazine", dj on No-Fi "Radio", and co-host of The Burlesque Podcast). Both Scarlett and Chris bring with them many years of experience in the burlesque world and in producing shows.

Most recently Peepshow Menagerie was named in LA WEEKLY's 2013 "BEST OF L.A." issue as the best show to see burlesque tributes and parodies of popular culture. Scarlett Letter was named "Most Glamourous" at the 2012 Great Southern Exposure Burlesque Festival and was also named "Most Classic" at the 2007 Boston Burlesque Expo and won "Best Solo" and The Legends Award and the 2010 Boston Burlesque Expo. Chris Beyond was named in the Top 10 Non-Performing Burlesque Personalities on 2013 and 2010 by 21ST CENTURY BURLESQUE Magazine.

Both are regular volunteer staffmembers for The Exotic World Burlesque Hall Of Fame in Las Vegas where Chris also co-produces the BHOF Photo Safari.

Each of our monthly shows has its own theme and we cast our performers according to talent and if we know if they have a number (or could create one) for that particular theme. We are well known for our send-ups of directors David Lynch and Ed Wood, and parodies of Doctor Who, Harry Potter, Marvel Comics, and Disney. We also often do burlesque tributes to some of our favorite musicians and bands like The Beatles, Devo, The Smiths/Morrissey, 'Weird Al' Yankovic (a co-production with S.F's Pickles Kintaro that amazingly played to a full house), and most recently David Bowie.

We have been very lucky to have worked with some of the best performers in the burlesque world community like Kitten DeVille (Miss Exotic World 2002), Lux LaCroix (1st Runner Up, Miss Exotic World 2008), Ruby Champagne (Miss Viva Las Vegas 2010), Dizzy Von Damn! (Miss Viva Las Vegas 2008), Burlesque Legend Kitten Natividad (films: Russ Meyer's Beneath The Valley Of The Ultravixens, Airplane!, Another 48 Hours) and many others for whom we are always grateful to when they agree to do our show.

We also have been lucky to work with several comedians and bands, some of whom could be considered a little out of the norm in the burlesque world, including Erik Charles Neilson of NBC's Community as well as DJ Douggpound and David Liebe Hart from the tv show "Tim & Eric Awesome Show, Great Job!" There is always room for the weird and strange in our particular burlesque show. It's what puts the menagerie in our peepshow!
Last edited: May 15, 2016
Click to expand...

I shall phone Simon and tell him to get over there, L A has got talent after all !

This has to be a joke! It's got me in stitches! HAHA!

It's real. Played to a full house last year. Looking forward to all the new acts this year as well as bringing back some favorites!

Here's a couple teaser posters for this year's show (I'll post more as we get closer to the event). 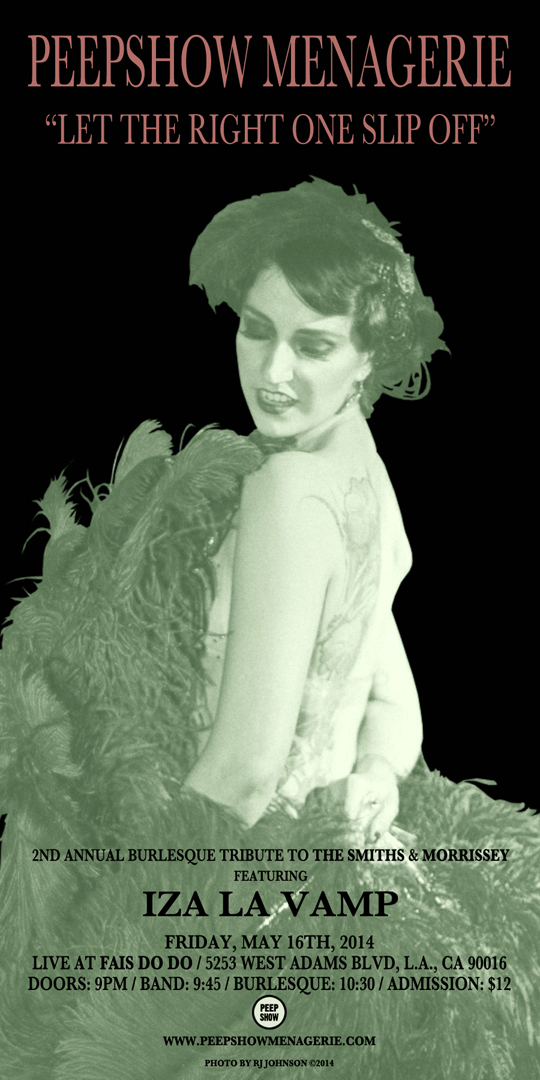 DAVIE said:
This has to be a joke! It's got me in stitches! HAHA!

I saw this show last time and its really good. Lots of time and effort put into this by a real Smiths/Moz fan for sure

Here's another one of our teaser posters for the show (we will eventually have one for every performer). Some of you might recognize that these are based on the original promo posters for a certain band (or in a couple cases, person) we know... Perhaps, with a few key differences. Here's another; this one for Holly Go Darkly... Looks like a great show to attend . Love the posters !

Thank you Guernie! Hope you are in or around L.A. to make it. That being said, we are actively looking into touring the show, hopefully later this year to areas outside of LA/OC (and other states). I guess it all depends on who'll have us and being able to tour whilst not (figuratively) losing our shirts doing it.

In the meantime, we have released our 79th "Peepshow Pin-Up" for May, 2014 and it might have a familiar-ish look to it, in running with the current theme... Just a quick note during all of the concert craziness...

Hope to see you all there! We're only just a little over a week away at this point.
~ Chris Beyond

So ONE WEEK FROM TONIGHT we are lucky enough to have one of Burlesque's top stars in the show (and aside from being a huge Smiths and Moz fan, she is also a choreographer for top hip-hop artists that you've actually heard of, as well as a regular at LUCHA VA-VOOM). So don't miss out on seeing LUX LaCROIX in Peepshow Menagerie's "LET THE RIGHT ONE SLIP OFF" Auuughh! It's happening THIS FRIDAY! And a new single tomorrow??? Crazy week for Morrissey stuff! And the winner of most unusual performer name in the show this Friday goes to... Just TWO DAYS AWAY until the show!!! Here's the promo poster featuring our BOY-lesque performer for the evening... Only one more night until the show!!! Hope to see you all at the show TONIGHT at Fais Do Do in L.A.!
~ Chris Beyond
You must log in or register to reply here.

Morrissey A-Z: "Let the Right One Slip In"
2

"Let The Right One Slip Off" - A Burlesque Tribute to Morrissey & The Smiths returns (LA, May 15, 20