Ok... so my good friend and I drive a number of hours to get to the K.C. show... we go in toss back a few cocktails to numb ourselves from the drone of Kristeen Young's noise.....

We move into the GA standing area with cocktails in hand.....we push our way up to the front.....then they break into the opening drums of The Queen Is Dead and its on like Donkey Kong....

Long story short......we make through packed body to body... Moz even comments that we "Stink" LMAO...... so they throw the set lists out at the end and my friend goes berserk and dives on the pile of people to get a copy of it for me. 30 seconds later he comes back with one of Jesse's guitar picks... He commented that if the shirt would have been thrown 3 steps closer we would be going home with that too. Its so nice to have a friend who is a bulldog to get you some of the nice items.


Anyhow he asked me to post the set list for all my morrissey friends.... i.e., you lucky bastards. So here it is. 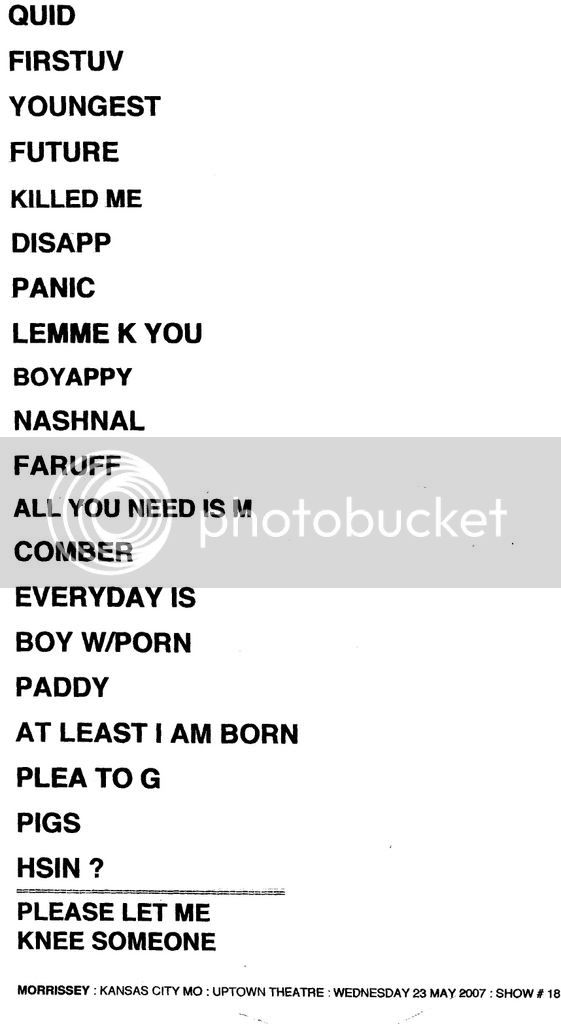 Hopefully the bootleg of this show will surface. There was a guy who had a video recorder rolling for at least 1/2 the show before security got out into the sea of people. Hopefully he got away with the video and will post it.
Security checks were WEAK.... no pat down, no wand, just empty your pockets.... Security guys were their standard jerk-off selfs.
Gotta run.

P.S. Please, Please. Please was replaced with Last of the Famous at this show.
C

Thanks so much for this.
U

Great set list. Congrats on getting it and thanks for the scan. Amazing that he played Last Of.... Lucky man, you. Congrats on the pick too.

- unrulyboy -
You must log in or register to reply here.