He told Sky News that if reports Morrissey said he liked Nigel Farage "a great deal" and that the Brexit result is "magnificent" are true, they no longer share the same beliefs.

He said: "Yes that's probably right - I always forget about that, it's stuff I hear second hand and I don't believe everything I read but if that is the case that he's pro-Farage, there would be a slight drawback in that, as anyone would imagine."

"As far as Brexit goes, I'm proud again to be in the minority. No-one ever says the majority is right, I've been in the minority a lot - when I was younger and now," he said.

He said: "At the time when Thatcher came into power, young people were really against it - the meanness of it, the disappointment.

"My personal politics were that I thought decency and society should look after people who need a helping hand and I still think that and I think the Conservative government stood for the opposite of that and I still do."
Last edited by a moderator: Nov 2, 2016
Click to expand... 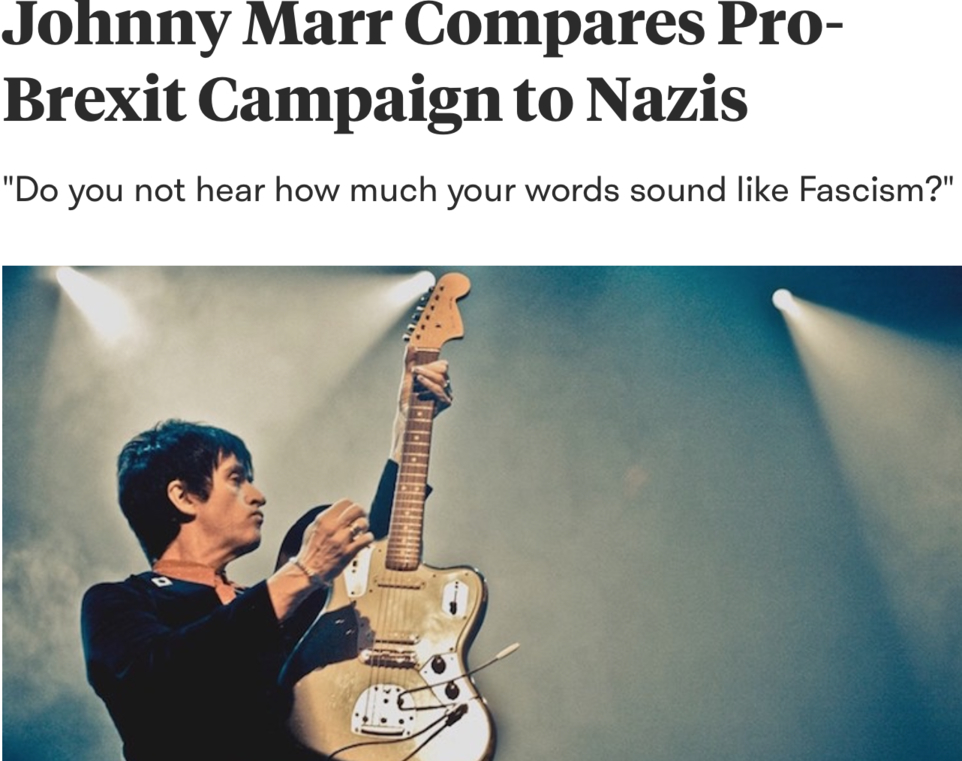 Nigel Farage is cool and Morrissey is cooler.
A

Meanwhile the "monster" arrived in Los Angeles. Oh look what a "monster" he is

The difference between Johnny Marr and many posters here

*Johnny Marr reads something about Morrissey* - "I don't believe everything I read but if that is the case..."

*Morrissey-solo forum posters read something about Morrissey* - "It is 100% the truth, I will take it to the grave, I will interpret this exactly how I want and give zero room for error or misunderstandings"
A

Anonymous said:
Distancing himself from Brexit on Sky News owned by Rupert Murdoch. Oh the irony
Click to expand...

Trying to release a single on the back of the Paris murders, oh the irony .
Making cheap digs at Bowie , getting people to post a picture of you, Nancy and a dog on FB , with a statement . Basically saying " I prefer a dog to Bowie " oh the irony.
Saying you respect life . Then waving a jewish flag in Israel . Oh the irony .

Morrissey relied on his phoney relationship with thug Jake for his book. The perfect love story is a hoax . Jake has been saying he hates moz for 15 years , at least .
He doesn't respect him at all. He hates him even more since his partner fell in love with that younger years morrissey look a like Ally , Alan whatever his freaking name is . I hear she was all set to leave but moz clone wanted nothing to do with it and moved to America ( even his clone is a weirdo twat ).
Now she isn't even to listen to Moz at home . Jake banned it
Stop pretending Morrissey hasn't f***ed his career up look at the respect and love in 80s, 90s, early 2000 . Look now . His career and his music are a mess . Nobody but nobody thought World Peace was a great important record . Just a "Not bad " record .
Johnny may not be edgy , but he isn't a racist c*** like Morrissey . Hes also a hell of a lot smarter than Moz the alcoholic . There is only 4 years difference in age yet Morrissey looks 30 years older .
f***ing Morrissey the f*** up
A

Anonymous said:
Meanwhile the "monster" arrived in Los Angeles. Oh look what a "monster" he is

where s the evidence of this love of farage? I haven't seen an interview or recorded quote or anything

Anonymous said:
where s the evidence of this love of farage? I haven't seen an interview or recorded quote or anything
Click to expand...

Anonymous said:
Meanwhile the "monster" arrived in Los Angeles. Oh look what a "monster" he is

I can only speak for myself, but I'm a Morrissey fan and I don't think Morrissey is a monster. I do think his political views are a bit ridiculous.
A

Plain and simple I don’t think either of the two know what they are talking about. I think these guys both need to realize that the old paradigm of left vs. right politics has gone the way of the dinosaur. There is no Labour, no conservatives, no republicans, and no democrats. It’s just one big corporate/globalist takeover that all these parties are complicit with. I’m really not sure if either Moz or Johnny realize that. I can say that when I was at MSG for Morrissey last show I was really disappointed that he made reference to voting for jon stewart or hillary. At the time it struck me as odd touring an album entitled “world peace is none of your business” and then almost giving hillary an endorsement of sorts. This of course is the same woman who joked about destabilizing all of north Africa and the middle east…”we came, we saw, he died hahaha”. Furthermore, when I read months later of his support of Brexit and Nigel Farage those MSG comments seemed all the more confusing. Johnny can say what he likes on his soapbox but to me it sounds like sour grapes more than anything. It’s obvious Morrissey put the kibosh on the reunion shows in 2008. Now for Johnny to seemingly take this holier than thou position as it relates to politics is just silly. Johnny is coming off smug about Brexit, running 8 miles a day, not taking a drink, etc. So the f#ck what? Is this the same guy who used to shovel snow in the 80’s? I personally don’t agree with Trump or Hillary but if I was in a band I wouldn’t swear off reforming over some comments the singer made about a particular political issue.
A

He's a rotton egg - part of the ever confused left wing (just like you). Lets pretend their isn't a problem because we might offend someone.... Lets not think about the real problems/crimes at hand (why is their refugee crisis? - Is it because our polititians (specifically the Remain ones) continue to bomb the innocent?) instead lets welcome an influx of refugees almost exclusively into the working class communities of Britain from the saftely of our middle class suburb, and when those working class people complain/object/protest we'll call them racist and close minded/seeking to demonise.

Also because we think we're cool because we don't hate the Germans and the French and because we like to sometimes go on holiday to Beligum and we saw a film once with subtitles, we'll suggest that anyone who thinks we shouldn't simply hand over our ability to negotiate trade and legislate laws, for no good reason, to unelected and unaccountable EU polititians who don't actually have our best interest at heart is racist/closed minded/not progressive.

True that. The fact he is even talking about Moz is a good thing. I know it's all because of the new book but still good to see. They should be going to each other's concerts. Life is too short for holding grudges.

Isn't it time this site was renamed JohnnyMarr.Solo.com? Morrissey always the mother ship
A

He hasn't set out to distance himself. He was asked a direct question to which there was only one answer he could honestly give.
C

"Do you not hear how much your words sound like fascism (to me)?"
FTFY

Totally meaningless. Some unspecified "words" "sound like" something most people agree is bad. That's no more coherent that a random Morrissey quote. Some Brexit supporters probably were motivated by reasoning that was less than progressive or altruistic, but it seems to me that anyone is better off having the least amount of government possible. Why be part of a union where you're paying more than you receive and where decisions are made for you by a group of people who don't necessarily have your best interests?
If being a member of the EU means stability and prosperity as many believe, why not say that? Comparing unspecified statements to a buzzword like "fascism" is pointless. If someone is making fascist statements then state that explicitly.
A

A good egg is a poor choice of words to describe a vegan.

can you imagine if the headline was MORRISSEY COMPARES PRO BREXIT CAMPAIGN TO NAZIS.wonder how johnboy will cover the trial in his book,think it will be glossed over at best.ps 20 quid for his book,i got morrisseys for 5.99 out of wh smiths.double mega rip off.
rip roaring,free scoring,never boring,glasgow celtic.
You must log in or register to reply here.