Hey guys. John Deacon is credited as bassplayer for several tracks on 'Kill Uncle'. I've seen several sites claiming it is in fact John Deacon of Queen. This seems very unlikely to me, seeing how Queen were recording 'Innuendo' at the time. So is it just a bassplayer with exactly the same name?

Moderator
The simple answer is yes, it's that John Deacon being accredited.
That said, Passions doesn't acknowledge him as bassist on Rut, Truth or Witness as asserted on various Wikis which is odd.
I've found a couple of Queen fan sites that credit him as playing on it too, but the liner notes from then and later reissue make no mention (both had poor liner notes as it was).
It will probably need a good search of reviews/articles circa '91 to further source information.
There's certainly no photographic evidence that I've seen myself - anyone?
Regards,
FWD.
Stealing things from the Internet - so you don't have to.

Where has John Deacon been credited with playing on Kill Uncle? It's not impossible, I guess, but a certain proportion of things you find on Wikipedia are just nonsense put there because it was apparently funny at the time. My hunch is that that's your answer.
A

Hey guys, topic opener here. Thanks for the replies so far, and especially the person who took the trouble to contact Mark Nevin about this. However, i feel like maybe his answer is not the final or total answer. If you look at wikipedia, there's no doubt Mark Bedford was the main bassplayer, but specifically John Deacon is credited as bassplayer on tracks 2, 4 and 8: 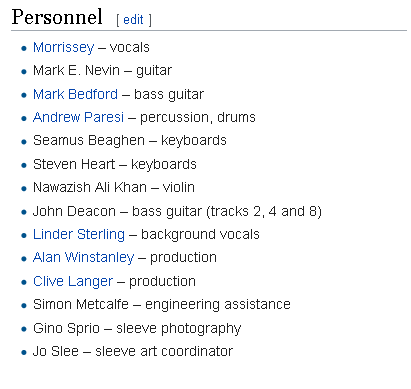 Could well be it's just a joke but usually little jokes like that don't last very long on wikipedia. FWD is probably right that this needs a search of news clippings from that time. Thing is i was a huge fan of Queen in the 80s and early 90s and then following that became a huge Morrissey fan and i never heard this before recently. John Deacon and Morrissey would have actually been a great match imo.
A