Jacqueline Morrissey statement re: England Is Mine (via SER) - "OFFENSIVE misrepresentation" 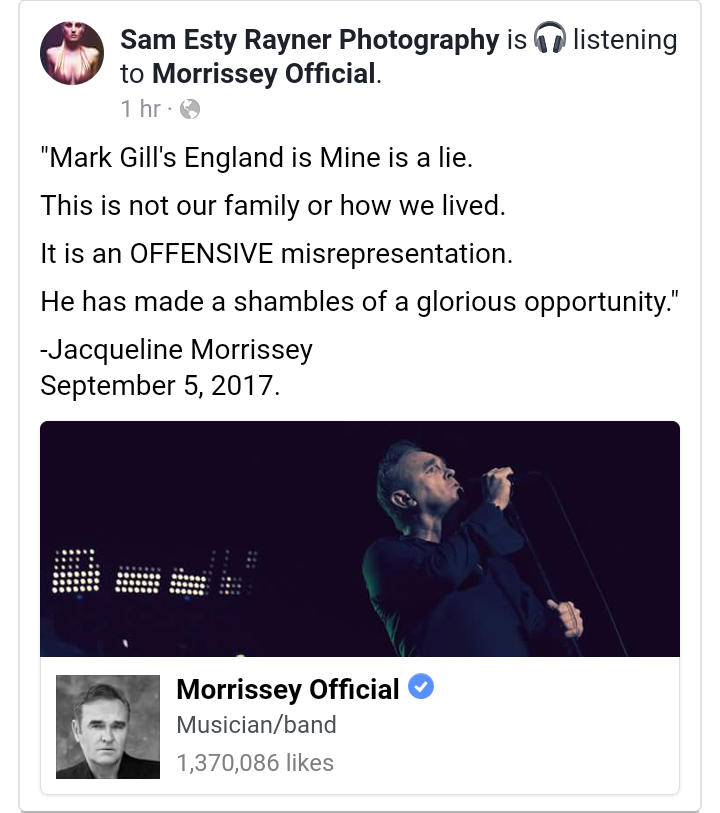 I think '24 Party People' is the best film in films which deal with British Rock bands. Ian Curtis in the film is what I exactly expected before. however, 'Control' directed by Anton Cobin(?) disappointed me.

If this film is not biographical and deals with just the era before forming the Smiths, it should portray what Morrissey used to be or how he was miserable like what he says himself.

but I don't think that this film nailed it.

At least, 'Velvet Goldmine' contains pretty beautiful Glam Rock stuff even if David Bowie refused that his music was used in the film.

the music in 'England is mine' doesn't sound like the Smiths at all. even the main actor doesn't look like Morrissey. this kind of films are made for ripping their fans off. they just sell nostalgia.

but the saddest thing is that I would want to watch this film.
A

Anonymous said:
Seen the film twice now. There is nothing offensive in it. None of the family are shown to be nasty. The parents row off-screen, but there is no implication of anything other than straight-forward discord between them. The siblings squabble a bit; Dad tells Steven to get a job. Mum encourages him to follow his dreams; sister takes the mick a bit, he takes the mick back. Nobody is made to look abusive or cruel.

If the family are genuinely offended, it must be from some sort of wounding feeling of having any portrayal whatsoever of their domestic life, because the film's content doesn't merit the tone of Jacqueline's statement. But I'd be amazed that they hadn't complained like this before; years ago, nearer the time, with previous discussions or mentions in books etc, let alone Morrissey's lyrics.

The film was a low-budget indie effort made by lifelong, Mancunian fans of The Smiths, with nothing to gain from alienating themselves from something they love so dearly. Numerous interviews with the cast and director mention the small bugdet, short timeframe and logistical constraints, meaning certain topics (e.g.: vegetarianism, trips to America) were left out, in favour of trying to tell a simple story about a young guy. Without millions to spend on an exhaustive 8-hour drama epic that captures every facet of his pre-Smiths life, what can people reasonably expect from one film? The thing is, most fans probably wanted to see a visual, cinematic realisation of the same emotions they had when they got into the band, or maybe a journey that mirrored their own growing up, and that is basically impossible.

Also: not seeing it 'on principle' is totally ridiculous. It's just a film; it's not someone waging war on anyone's personality or beliefs. The statement is way over the top, as was James Maker's (whose was very funny), which was only based on the trailer, not the film. Enjoy it or don't, but it's not to be taken so seriously.
Click to expand...

No, most fans want to see and read the truth. Otherwise, what's the point ? WHAT is the point ?

Hazard
You must log in or register to reply here.

A
"England Is Mine" - Mark Gill, Jack Lowden interviews

A
‘England Is Mine’ to be released theatrically by Cleopatra Ent. (Aug. 25 NY premiere) - Deadline

Jul 17, 2017
Anonymous
A
I
How the new Morrissey biopic England is Mine was designed - Design Week

James Maker makes statement re: "England is Mine"
6 7 8