As TTY chart updates go, there's something a tad sad about this...

Istanbul by Morrissey is #1 this week on college radio in Germany.
Last edited by a moderator: May 15, 2016

Uncleskinny said:
As TTY chart updates go, there's something a tad sad about this...

Istanbul by Morrissey is #1 this week on college radio in Germany."

Apologies if previously posted, I didn't spot it.

Clearly a dig.
.
.
.
++ I'm not running away I'm running too, corruption of the spirit isn't in it for a good looking man about town ++

Never thought about that, good point. I recall the angry letter to Sanctuary posted here where Moz bemoaned the lack of marketing nous. If it is that connotation, then that's not a good signal for the relationship with Harvest.

Not obsessed with the charts, eh?

I wish he'd focus less on the charts and more on the actual music and everything that goes along with it (artwork, tours, musicians, etc.).
I'm almost sure you can do better than that.

It sounds like a sarcastic swipe to me. I daresay we'll get the story behind (and Morrissey's take on) this strange glut of download-only releases one day.

Subscriber
Out of interest, where can we look to see this chart? What else is on it? Does it, in fact, exist?

As a German, I've never heard of the charts that 'Istanbul' is supposed to top. There is only one official sales chart (which is crap). All the others, inclusive iTunes chart, are more or less 'private' and do not mirror anything relevant.
Five Seconds To Spare?
http://www.krix-s.de/morrissey.htm
L

Uncleskinny said:
Out of interest, where can we look to see this chart? What else is on it? Does it, in fact, exist?

Users on this site based in Germany will certainly have more info,
but I did find this one, the "Deutsche College Radio Chart" after Googling, and using my rudimentary German language skills as well.

Subscriber
So what we're leading to here, is a made-up statistic intended as a statement on the way the record industry works, and in particular Harvest? He could have said #1 on the Mongolian goat-herders chart.

When I first read this true-to-you statement I thought he had finally totally lost it. But then yeah, reading comments here, it's clear it must be a piss-take by Moz. Not even he is that ridiculous. Surely!? (the only thing giving me a nagging doubt at the back of my mind is that he has - apparently genuinely - bragged about some meaningless charts over the years, such as US physical singles charts, where only a few hundred copies are sold etc and the positions are meaningless more or less)

As for German college radio, well it is a thing, http://en.wikipedia.org/wiki/List_of_campus_radio_stations#Germany who knows if anyone compiles data for it though. Of course, US college radio - at least in the past , I can't say about today - , was seen as a massive thing, data was collected, and it was seen (probably rightly) as significant.
A

See the below link it's a true fact

Uncleskinny said:
Out of interest, where can we look to see this chart? What else is on it? Does it, in fact, exist?

Maybe this one? I don't see Morrissey on it though...erm...

We are all we Need

Lol'd definitely a dig, I would hope he's in on the joke by now

Moz had 200,000 + people at his fingertips with the twitter account and for whatever reason chose to delete it

He needs to look at the success of quarry and correlate that to the number of times he whored himself out for tv interviews, radio etc self promotion needs to be done now
IF YOU CANNOT STAND THIS FAKE WORLD, TAKE MY HAND

VivaHollandia said:
It's not a joke: http://www.campuscharts.de/campuscharts
Click to expand... 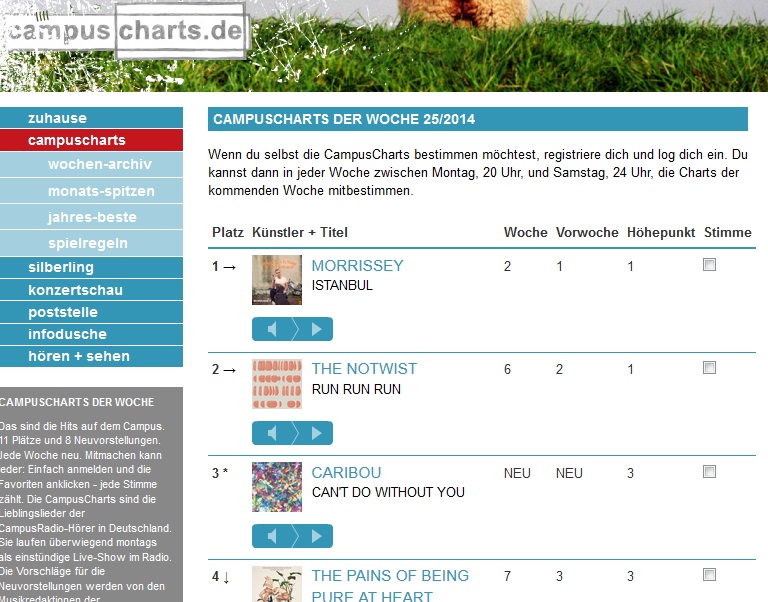 When I said it was a 'piss take' by Moz, above, I didn't mean to suggest the chart wasn't real (as I was saying, US college radio is well known as having such charts so why not other countries..) but you would hope, at this point, that it is a joke on Moz's part, to have a go at Harvest for the poor chart performance of the singles generally.. well you would hope so..

Subscriber
You're all taking the piss, but he's beat The Notwist, and Caribou.
I'm stubborn,selfish, and to old.....

I can't help but feel that all you guys who think this is some ironic dig are being a tad optimistic.
You must log in or register to reply here.
Similar threads
TTY - NME edition and "Istanbul" chart update
Istanbul - cool find?
dünya dinlemiyor - Smiths karoake project by Phil Collins (2005, part 2: Istanbul) on YouTube
Istanbul date no longer happening according to ITB Agency
New tour possible setlists? More of the same or a change?
I don't think there will be an Istanbul gig
My attempt for the Istanbul concert
Single Istanbul/One Of Our Own now available for presale on Amazon.fr (CD or vinyl?)...
"Istanbul" is a bit like Meja's "Hippies in the 60s"
Istanbul audience members fight for shirt video - true-to-you.net
Share:
Facebook Twitter Email Link