saw the passenger clip from youtube, have searched through the Mozipedia,
just 1 queation

Was Morrissey at that gig?


[no I don't do quizzes so excuse me , and was 12 myself at that time, and couldn't find it
searching half an hour for this post]

nobody who can verify or not?
[SIGPIC][/SIGPIC]

Passions Just Like Mine refers to an Iggy Manchester gig in 1977 that Morrissey reviewed in Kids Stuff fanzine issue #8, but that one featured TV Smiths Explorers and Telephone in support at the Manchester Apollo.

I assume Telephone must be a long lost band called Telephone, because Television wouldn't appear below TV Smith's Explorers.

There are two other Manchester gigs also referenced, one with Bowie making a guest appearance, support The Vibrators, and one not, supported by The Adverts.

Were there three Iggy shows in Manchester that year? If so, who supported him and where, and if TV Smith and Telephone supported Iggy, was there just one Apollo gig, because if there was, then Morrissey must have been there because he wrote a review. 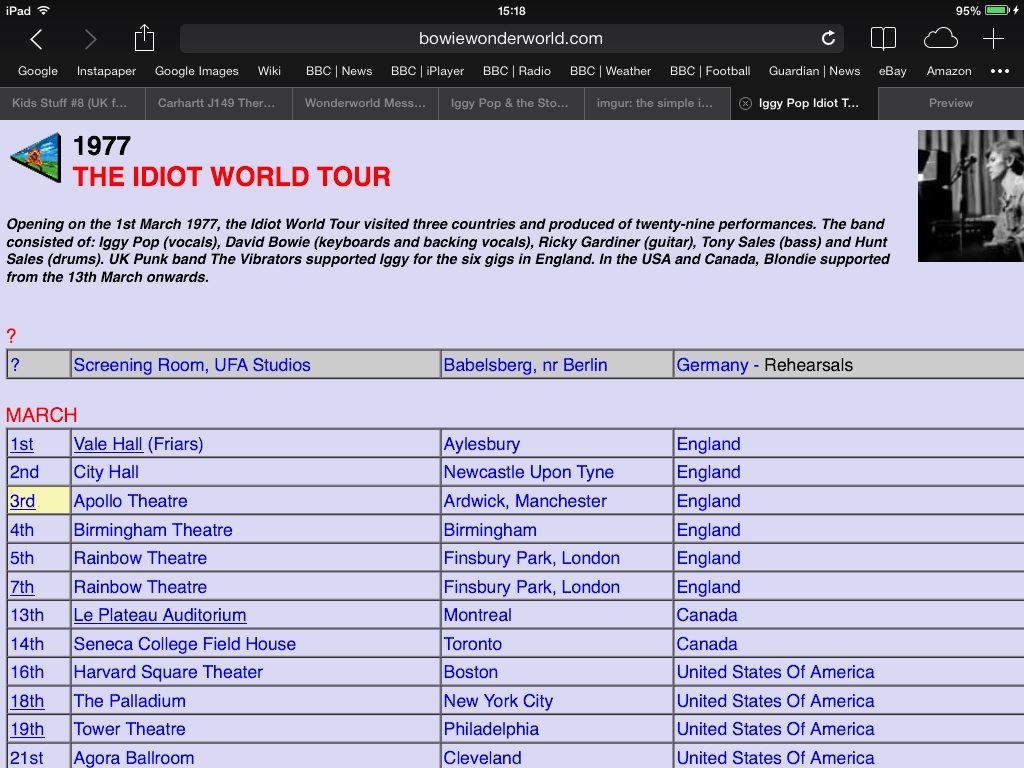 So, the Idiot tour started in Aylesbury on 1st March and ended in San Diego in mid April. Did Iggy return with the Stooges? I thought they spilt in the early seventies and only got back together again eight or nine years ago. By 1977 Iggy was enjoying his greatest solo success, so I doubt he'd be up for a band reunion.

Iggy seems to have returned to the Apollo...

During the latter part of 1977 he was supported by the Vibrators in London, so perhaps that explains the question mark over the support earlier in the year.

OK, with the waters sufficiently muddied I shall withdraw.
Last edited: Sep 27, 2013
"All you people ought to be like me / Drink that good cold whisky and let the cocaine be."

Steven Morrissey reviews an Iggy Pop / TV Smith's Explorers / Telephone concert at the Manchester Apollo. "Would we have known that this was the much promoted American Independence Day Special if not for the minuscule moth-eaten US flag shoddily propped above the stage? And they didn't even bother to iron it... The ceremony began with Telephone from France, whose strange collection of songs never rose above the level of intense mediocrity. TV Smith's Explorer's look uninteresting, but are not without merit. Towards the end of their set, Smith (who hasn't changed his clothes since 1977) proclaims: "Someday it will all make sense". Where would England be without such visionaries? Which brings us to Iggy. Dear Iggy! Always there when we... don't quite need him. Opening with 'Search And Destroy', Iggy's out to squeeze a bit more mileage out of the ol' legend. Everyone screams so loudly. In fact that they probably didn't hear Iggy's dire vocals, and the doleful heavy metal bash coming from his new band - a notably faceless crop of Egyptian mummies. Iggy's taut torso is not on display tonight, but he proves his credentials by indulging in his tiresomely cute King Kong antics as he slowly climbs up the amps to squeals of delight. King Kong? Little Ig looks as fearsome as a well-laundered Klondike Annie. This year Iggy models the jaded gigolo look, a style for which the voice must always be out of tune, it seems. The new Iggy is really into crowd participation and insists that every song ends with a running 'la-la-la'. One would imagine that the next step for him would be the Golden Garter or, better still, retirement."

So, no. That's four years too late.

I'm handing in my warrant card.
"All you people ought to be like me / Drink that good cold whisky and let the cocaine be."
M

Just a bit of info, even though it's not the subject here...

"I assume Telephone must be a long lost band called Telephone, because Television wouldn't appear below TV Smith's Explorers"

Telephone are a very popular French band and although they split in 1986, their songs are part of French (pitiful) pop music culture and even the younger generations listen to them.
I, however, agree with Morrissey on that one ("The ceremony began with Telephone from France, whose strange collection of songs never rose above the level of intense mediocrity") but that's my own opinion and many people I know would disagree.

Téléphone was a French rock band formed in 1976 by Jean-Louis Aubert (singer/guitarist), Louis Bertignac (guitarist/singer), Corine Marienneau (bass/singer) and Richard Kolinka (drums).
Their first, self-titled album, was released in 1977; by the end of the decade they were one of the biggest French rock bands around, opening shows for The Rolling Stones in Paris, Quebec, the United States and Japan. The band split in 1986 for personal reasons.

May I add they reformed a few times but never for long.
And also, the lead singers and song writers Aubert and Bertignac had very successful solo careers.

Here's one of their most popular song, if anyone was interested. If you hang out at students clubs in France, you are very likely to hear it in the early morning hours when everyone's too drunk to care.


So, what do you think? Would have Morrissey liked the video? Maybe he would have seen the irony in Thatcher, The Queen and Hitler grooving together...?

OK, this is it for my French Pop intrusion. I am bored now and I was bored before I even began!

Coming back to your question, I have not found any proof of Morrissey being at that concert in October 77, even though it's rumoured he was, but it could all be part of the public's romantic imagination.
Last edited by a moderator: May 15, 2016

Thanks for that. Very interesting.
"All you people ought to be like me / Drink that good cold whisky and let the cocaine be."

thanks mr Barleycorn for verifying

Thanks to MadeinSalford for some side info and the youtube video

I was sue about the Sex Pistols gig in 1977 , that's why when Isaw the clip, Morrissey
could have been in the audience , but didn't find any info that He really was there, so thanks
for clearing this, or my question.
[SIGPIC][/SIGPIC]