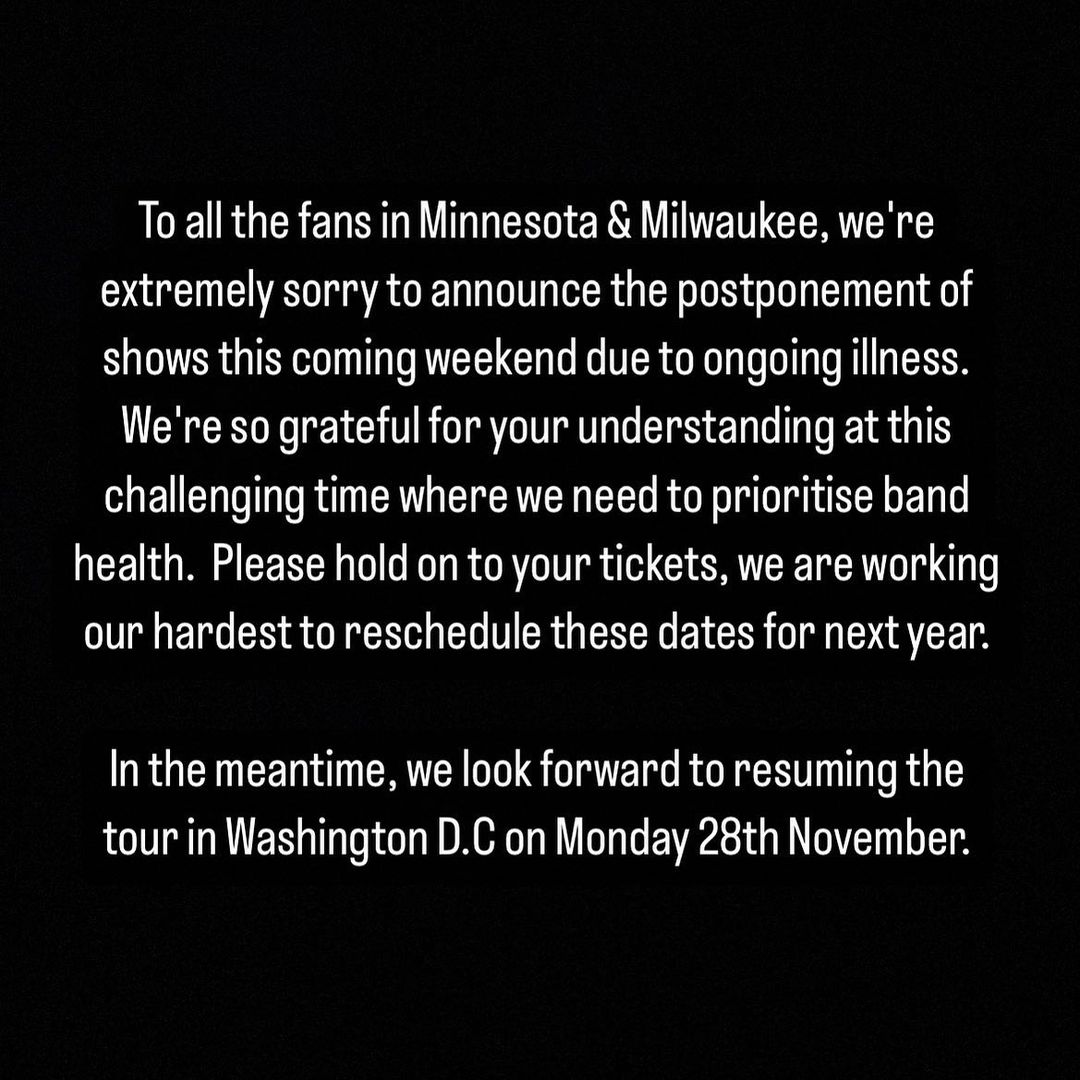 I don't know about you guys but I really, really enjoy his live performances. In my dotage, it's only Morrissey and the Gypsy Kings that i'll consider seeing live and Morrissey never disappoints!
L

Please FWD change your photo, . Since you uploaded that photo of Moz does not stop canceling shows, that photo is terrible !!! He seems to be suffering !!! ¡¡¡¡Constipation!!!!!
M

Redacted said:
Check all the rules for that venue if you haven't already, it's pretty restrictive. Also, parking, that part of the city can be tricky. Good luck!
Click to expand...

What's restrictive about the venue? Boston removed all their Convid restrictions earlier this year
W

Isn't he on record as saying covid doesn't exist? Perhaps that's why he won't acknowledge what has affected the band. He hates to admit that he is ever wrong.
I

I Wish You Lonely

You are not wrong.

Mozzypaws said:
What's restrictive about the venue? Boston removed all their Convid restrictions earlier this year
Click to expand...

This is all I have, it's right on the site. Also, there used to be a small parking garage right on Landsdowne St. that I used to use when the smaller clubs were there, I think it's still there, but there are other places around.

Marrs guitar said:
Morrissey. Not one who cares to satisfy his fans. I’ve been a fan since 89. I have some experience here. The lack of communication is not normal. A simple. “I have Covid. We will be back in the spring” is what a normal high functioning artist would say. And his band was scared to speak. His gag orders are something. Disappointing but I really see him as a link to my youth at this point. And it’s fine. He is just a bit pathetic.
Click to expand...

Dirk Blaggard said:
He may not have covid. I have tended to think often when M cancels, it's more to do with mental illness or not "feeling it", rather than a cold. Although he is meant to be a sickly type.
Not the best example of a veggie lifestyle, is M. He looks great at the moment For the last 15 years or so he has looked f***ing awful- at least 10 years older than he actually is, often fat, and his lack of energy is crazy.
Oddly since his mum past away, he looks fantastic. I do worry for our Kid. I mean, his "career" is in a bad way, Yes he can still sell venues, I'm not saying it's all over. I'm just saying it's not great
He has lost loads of respect, which was something he loved. Lots of "friends" have vanished, and there is a load who are only even there for what they can get. Now his Mother has gone.
It's no wonder he makes these needy comments, the guy is probably lost in a way.
He used to be able to know, he could demand stuff, but those days are mostly gone. He knew he once had an enviable place in pop history, that isn't the case now.
At one point, I thought it was just fashion, once he died he would again be considered one of the greats, up there near Bowie. I'm not sure that is true now.
To me he is still great though but M isn't dumb he would have these thoughts about things. So I get it if he is depressed at the moment. He might not be but he might be
Click to expand...

Hmmm. I agree with almost everything you've said. I think the only point I worry on, and have given a lot of thought to, is how damaging this is to his ultimate legacy as an artist. We who follow him, and have done for decades are in a fishbowl to an extent. Every cancelation/walk off is the blasting away of some fans' dreams. The money spent, the anticipation, the singular focus we put on these shows...Morrissey fans are of a particular breed, and as such, the devastation is epic because it's so much more than just 'going to a show'...
So I guess the thing I keep pondering on is, outside of the fishbowl, does this truly impact his ARTISTIC LEGACY? There are artists on his level and from his time period that have left the stage and not really put out any work to speak of for 20 years. Morrissey has toured relatively consistently for 30+ years. Label drama aside he's also put out product more consistently than a lot of his peers. I'd really like to think, that when all is said and done, that his legacy is firmly intact. But neither he, nor his legacy is Teflon coated and how he moves forward from these shows, and the release of BONFIRE will be telling. I will continue to wish for as many shows and albums as he has in him, and move forward with caution when it concerns my own financial well being.

Morrissey has this in common with the Royal Family he despises: don’t complain, don’t explain. It’s not a good look really. Especially to the fans that have paid loads of money on tickets and travel.
L

It's strange everything... Suspension of the release of the album Now Cancellations Miscellaneous... Isn't this the time when Morrissey would have to go out and make some statements, even if it's in writing about the state of affairs? Moz you must explain to people what is happening, it is not fair pqra the fans, and less for those who dedicate hours of their lives to be in your shows, giving you support in these times in which it is not easy for many to go to see you reflects Moz
Z

For the first time I agree with you suckers. Morrissey needs to speak up. People gets sick. We all get sick. (no turkey casserole for my boyfriend today btw he got the flu ). I get it we get sick . However ! Morrissey should tell the bad news. !

Moderator
Rather oddly, there's yet to be any media pick up about these subsequent postponements.

People who are worried about Morrissey in these posts are the blind ones. He does this all the time. Ask any former business associate of his. They hate him. His former manager Merck dumped him. Merck now runs one of the biggest
Music businesses in the world. Hipgnosis. The Smiths essentially broke up because of chaotic management caused by morrissey. Alain was dumped at the studio door. Now Boz is gone without comment. Canceled album deals only happen to morrissey. Canceled shows without comment. Morrissey. Unedited books written by him they are largely unreadable. Morrissey. He is a dumpster fire. Who has written some of ky favorite songs. Thanks fully I only need to buy his product. And don’t have to make money off of him. Or work for him.
A

It's o.k. ...just get well soon. Really..it's o.k. "You will return one day. Oh, because of all the things That you see when your eyes close."

Famous when dead said:
Rather oddly, there's yet to be any media pick up about these subsequent postponements.

Sadly. Morrissey is a niche artist. Media has also grown tired of this. It’s only need when it is something newsworthy. Morrissey disappointing fans is expected. Not news.
A

Jamesqwq said:
Sadly. Morrissey is a niche artist. Media has also grown tired of this. It’s only need when it is something newsworthy. Morrissey disappointing fans is expected. Not news.
Click to expand...

You know it’s over when he can’t even get bad press anymore.

Jamesqwq said:
Sadly. Morrissey is a niche artist. Media has also grown tired of this. It’s only need when it is something newsworthy. Morrissey disappointing fans is expected. Not news.
Click to expand...

Well, the world wants McDonalds, Disney, Netflix, and TikTok so why cater to the world really
S

It sounds as if one or more band members have COVID. When you are on the road as a band and you are frequently sharing indoor spaces together . . . it is is a uniquely challenging situation if one member contracts COVID. The illness might be milder in 2022, but it is still highly contagious. Where do band members stay if on the road and one or more have COVID? I guess the tour has insurance to put the band members up in hotels to isolate and get medical treatment?

The truth is rarely pure and never simple.

Subscriber
A new album and a successful tour was too good te be true.

Maybe he should just call it a day and retire.

And live in oblivion.
M

I wish you'll be feeling healthy and strong again soon!