Besides confirming Wish You Lonely as the next single the e-mail Mkt brought News about exclusivities in the Pop Up Shops:

New track from Low in High School, the second to be taken from the record, "I Wish You Lonely"is out now as an Instant Grat and available on all DSPs.

The shops in Camden Market, London and at 8250 Melrose Ave, Los Angeles will have 100 album Test Pressings available for purchase at each location on a first come, first served basis each day. (40 on Friday and 30 on Saturday and Sunday). These will also be the one of the only physical stores stocking all of the Language Edition coloured LPs and the 7” limited edition boxset. Alongside this, there will be exclusive Low in High School merchandise and numbered prints, more details to follow.. If The News is making you feel small and alone there will also be photo opportunities in the shops with special artwork backdrops. London will be at Provender Building, Camden Market, NW1 8AH and will open at 8am on Friday 17th Nov. Los Angeles will be at 8250 Melrose Ave, Los Angeles, CA 90048.

Posted by Famous when dead: 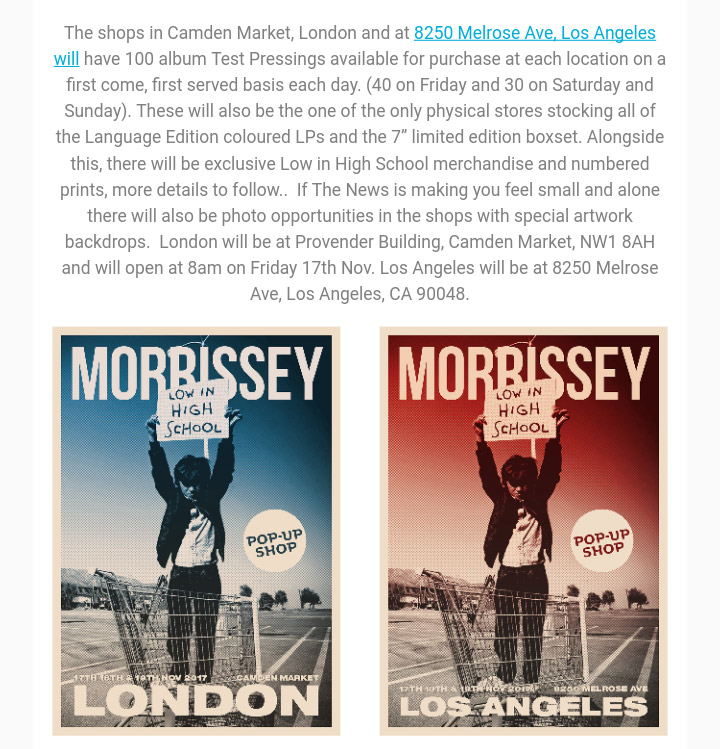 Junior Member · From Brasil
A

Anonymous said:
Morrissey, just like the Tories, has forgotten about us folk in the North. Camden is a bit of a trek from Yorkshire. No Manchester pop-up Shop?? M always quotes as his best gigs being in Yorkshire, Tyneside, Scotland and North West, no loyalty.
Looking forward to seeing Jared O’Mara in the next Moz video. Morrissey likes a loose cannon with Irish roots.
Pilgrimupnorth
Click to expand...

That's not fair. It's the label that's in charge of this promotion (and others.)
So it's not SUCH a bad choice to have the UK's Capital City and LA as only 2 could be selected.

Cornflakes said:
Yeah, remember when all the Tories seemed to care about was making sure everyone in the north of England was super happy?
Click to expand...

The alarm was raised by the informer
To let the bots know the hypocrisy of the performer
Most of them listened and had to admit
That the wizard of Moz, Steven was a huge lying shit
But there's always one and she still can't believe
He'll always be a CrankFraud !
A CrankFraud called Steve

#Boycott Low In High School
Steven is NOT animal friendly (like Glastonbury)
Cruelty without beauty, Steven has BLOOD on his hands.

Did you try and buy a Morrissey concert ticket and got beaten by a bot ?
Or was it more like......don't-bot-me-baby? Or maybe it was just something
screaming in your head ? Keep the faith (if you have any faith !)

Anonymous said:
Did you try and buy a Morrissey concert ticket and got beaten by a bot ?
Or was it more like......don't-bot-me-baby? Or maybe it was just something
screaming in your head ? Keep the faith (if you have any faith !)

Right, I'm sorry but you've 4kin lost me here with your first sentence.

How the 4ck can one get beaten up by a bot trying to purchase tickets online ?

Are you just being stupid on purpose for a laugh or are you just genuinely stupid ?

And for what it's worth I have no faith to keep whatsoever.

I'd press the buzzer if I was you and let the nurse come and sort you out.

Moderator
This info probably should go here too:
The test pressings will be signed by Morrissey:

Famous when dead said:
Was just digging around the internet for some info and found:
Perhaps a bit of new news?

"Morrissey is proud to announce the release of the second single to be taken from Low in High School. Jacky’s Only Happy When She’s Up On The Stage is available now on all DSPs and as an Instant Grat.

The 7” version of the single will feature a cover of the classic Elvis Presley track ‘You’ll Be Gone’, which Morrissey has been performing live on his current US tour.

The 7” is available to pre order via HMV and independent record stores.

It can also be revealed today, the previously announced 100 Test Pressings available at the album launch pop up shows,
will be signed by Morrissey.
They will be available on a first come, first served basis each day. (40 on Friday and 30 on Saturday and Sunday)."

Are the test pressings being signed news - as I can't recall that being mentioned?
Regards,
FWD.
Click to expand...

Here’s a picture of some of the exclusive merch 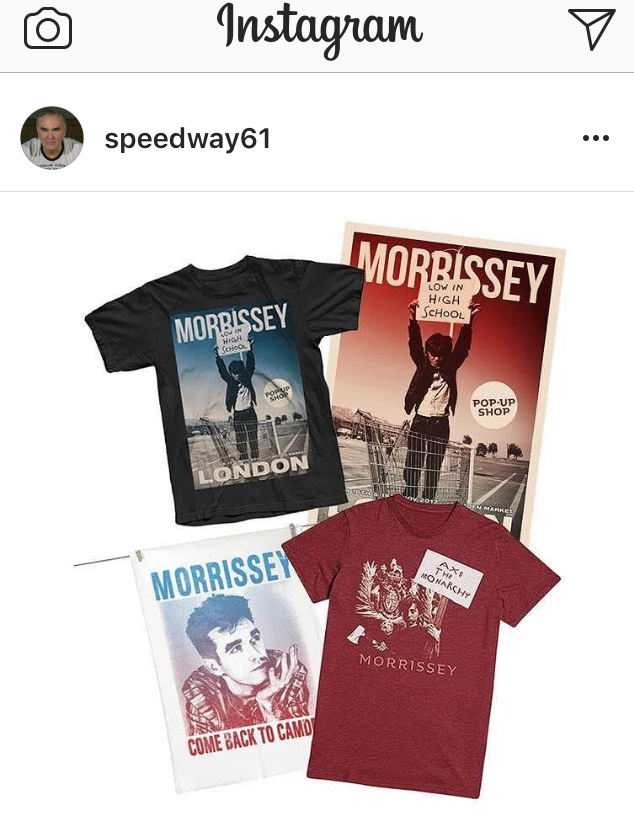 via speedway61 on instagram. I’m not sure where they got this image.
You must log in or register to reply here.