I have WPTMIM DVD and my god is it beautiful

i have a few scans and screen shots if anyone knows a good uploading site. image shack is a bit slow recently

got interviews at start of it someone from america is interviewed....a couple saying how much they love moz

then onto the inperfect list and views of the manchester countryside....the moors where murders were...then the stretford(i think) skyline of flat blocks...then the train line just going into victoria station where the old factories are...and the old block of flats with all the windows smashed...thena shot of commercial street with some builders in background...then i think some offices with the holy name church in background...think this is incorrect as i'm not too sure of that part of town...the main theme i'm getting here is old manchester mixed with new manchester...theres some more old buildings with cranes in the background...gun st. is shown...some grafeti saying salford 97...some more old factrores with new building...terraces...new buildings near the bridewater hall...the cis building...arndale center...by the way i'm typing this as i watch for first time and i love it its really good...the library is there now...trams...theres the tram station near the g-mex...picadilly garden arndale bride into marks n spencers...someone in a moz jacket walking down market street...debs in background...footy fans cheers...people arriving..people queueing inside...now running to get to front....AND NOW THE STAGE WITH MORRISSEY LIT UP AND HERE HE IS.

god i love that intro...sorry for the rubbish description...i'm off to watch it now
T

Jack the Ripper begins in black and white...this is very very good
M

Has someone started selling them early again?
T

jack the ripper also end sin black and white
at the end it has a few mins of film of people leaving the arena and the staff cleaning up then theres a bunch of stuff from salford lads club...some brief acoustic songs in the background but no actual footage of that is shwon...(wasn't that rourke?) a load of interviews from moz fans...including one more from the arena
then some archive footage of little lads running in and out of the lads club
and footage of the new strangeways sign which includes the MEN now on it
also i forgot to mention the footage at the start includes the strageways tower

all in all a quality dvd...a few more crowd shots...a bit more of mozz's banter in between songs (even on the move extras) backlground music on the menus is the riff from irish blood english heart

the inside booklet urges us to visit goveg.com to watch the 'meet your meat' video narrated by alec baldwin...it covers each stage of animals raised for food "the PETA video that all meat-eaters should watch and eveyr vegetarian should own"
D

Weird. I stumbled upon that video about 6 months ago and it practically turned me veg. Everyone SHOULD watch it.
M

Tom You Get, You Still Aren't Saying Where You Got It From
G

what exactly is the Salford Lads Club bit about? - assuming this is the bit where linder was filming outside. can you see me jacket on it?

it does say at the end

but unfortunatly ur not on it

and dean i am very ashamed to say i bought it off ebay from someone who recieved a copye arly off a record company i think i will still buy the dvd for a mate of mine...so i'm still contributing to morrissey's back pocket if anyone is offended by this. oh and i only spent 20 quid on it...not bad really only about an extra fiver.

i've been watching this all day..you won't be dissapointed...anyone know a good place to upload images to and i'll do a few screenshots
D

basta. anybody we would recognise on it then?
T

not that I recognise nope:'( only been star n garter once though ages ago just before move so don't really know what everyone looks like who goes there let alone anyone else 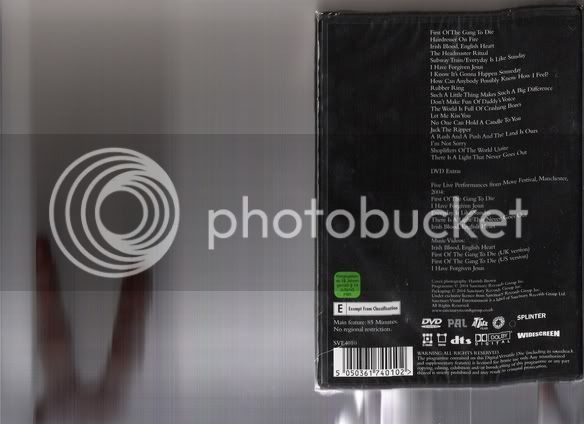 pic of the front (with sticker) this comes on at start [pic]

Re: this comes on at start [pic] oops sorry this will work

he's full of crap, visited the club how many times ffs? the only reason the shopkeeper knows his name is that he keeps going back there to buy cans of Tennents.
T

is this grim on the right? sorry for small size

Re: is this grim on the right? sorry for small size

yep he's a bloody bugger, I can see his camcorder! Nice shirt though eh?
G

Re: is this grim on the right? sorry for small size

yeah it is. i'm used to small sizes.

i should be THERE. I was right THERE! I was right in front of their cameras takin a pic of Andy, and I asked if I should move out the way and she said NO stay there. ffs.

looks like Jay Tando, and BG are the other two suspects.
You must log in or register to reply here.
Similar threads
WPTMIM DVD question
please tell me its the t.v. speakers that are broken and not my wptmim dvd
The One and One Who Can Be Seen On WPTMIM DVD Thread
WPTMIM DVD best price found...
Who's the lad at the end of WPTMIM????
WPTMIM highlights on Channel 4 tonight
I've saved WPTMIM for tonite and oh my god
WPTMIM - via netflix
Young Moz on WPTMIM
Who's playing the flute (not a euphemism) on "I'm Not Sorry" from WPTMIM ?
Share:
Facebook Twitter Email Link
Top Bottom