How many Morrissey/Smiths songs are on your computer?

None, I can't stand that guy! http://cf.morrissey-solo.com/forums/images/smilies/lbf.gif

i deleted some. so i lose fan points.
PERFECT 10 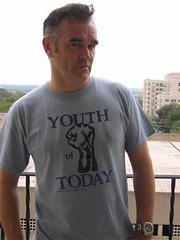 grand total of 808 if my maths serves me as it should.
El Cielo es azul, just don't go telling everyone
Y

To put it into perspective

do you lot include bootlegs?...

I have a lot of high quality "unauthorized releases" as well as all the variations from singles and other promos on MP3. I also have things like "Sound of the Smiths" which was supposedly remixed.

There is some repetition.

The Dave Matthews Collection is pretty cool because if it has been released either publicly or through promos I have it. That is the band that I can say I have most everything that has ever been offered.
"Set the gearshift for the high gear of your soul
You've got to run like an antelope out of control..."

Well what do you expect??

198 for Morrissey, and 87 for The Smiths. Very very small compared to you other guys... I'm sort of embarrassed! I had something like 400 total at one point, with all of my bootlegs and alternate versions hanging around, though that's still tiny to some of you! After a computer crash I couldn't bear to get my hands back on everything. Not after all the effort I spent into painstakingly looking over all those live versions! (and I'd have so many more if I have the time! But having so many versions drives people like me insane... I NEED to have all the lyrics copied down! All the little changes! All the between-song banter... every minor difference in the instrumental work! Must be cataloged! It could drive a person insane! A computer crash was a blessing in disguise!) Though I suppose someday I might get right back on it. It was a somewhat fun distraction from daily life!

Right now the only bootleg I have in my library is a single performance of Barbarism Begins At Home...

And now (to throw it into comparison like Buzzetta before me!) those 285 songs total make up a whopping 74.6% of my music library. I do believe Talking Heads are my #2, but even then they only have about 20 songs under their name. What can I say...? I stick to what I really like

The perspective thing is fun. . . let me see

I count bootlegs, but when I last cleaned up my mp3 collection I ended up putting a bunch of low-to-decent quality shows on CDs. Maybe Moz/Smiths would have had a few hundred more otherwise. The Napalm Death and Nasum listings are funny because a lot of their songs are under a minute long. I should have included The Meat Sh*ts as they tend to have 1000 "songs" on some of their albums
D the Smiths are in my My Morrissey folder, so not sure, but I probably have 10 times as much Morrissey as Smiths.

the Smiths are in my My Morrissey folder, so not sure, but I probably have 10 times as much Morrissey as Smiths.
Click to expand...

..I imagine that if

On the comp: none. On the mp3: I haven't got the faintest idea. Not a lot, I uploaded my favs only.