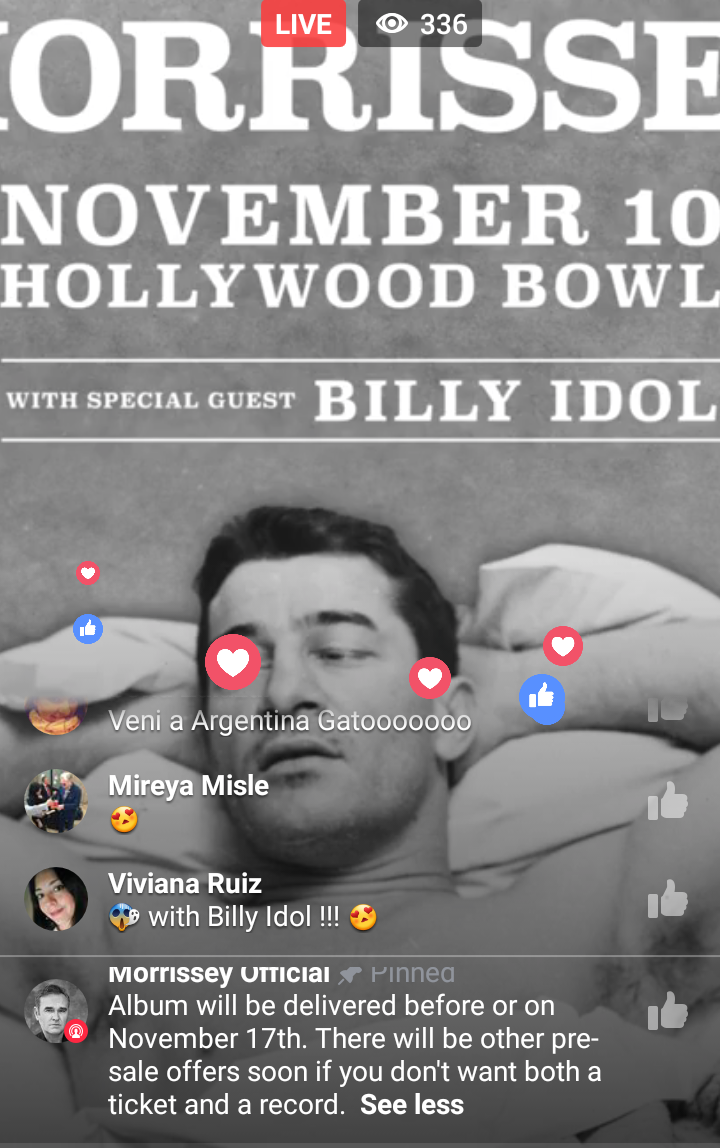 Billy Idol is the support for the gig on the 10th.
Confirmed (as much as that means) via a Facebook live presentation.
Screen formating is down to them not understanding the FB app.
Regards,
FWD.

MORRISSEY'S NEW ALBUM - "LOW IN HIGH-SCHOOL" WILL BE RELEASED NOVEMBER 17TH. A limited amount of tickets and vinyl records have been held for Morrissey fans for an early pre-sale for the Hollywood Bowl until Wednesday 10pm PST.

Link to event info / image on the Hollywood Bowl site posted by beewee.

Vulgarian · From Birmingham, U.K.
Moderator
B

Moderator
I get the same results as you clicking the first green 'find tickets' button and now using the button in 'section' for more than a single ticket.
And what a decent person bandrus1 is too - best of luck

FWD.
Some of us is turning nasty
A

Awesome !
I've just been trying to get tix for the Hollywood Bowel online and got randomly selected for 2 4kin Kryptonite tickets

.
Access all areas, including Steve's dressing room, during the performance we are sitting with Diesel, driven to the after show party in the same limo as Steve and Deez.

Oh my God !
Reckon Mrs Benny gonna love me for a long time for this

My friend was trying without luck for hours on computer, then switched to the phone and got one immediately not front but decent spot and regular price -Hope never dies ! Good luck to everyone!
B

Moderator
No pre-sale, no codes... 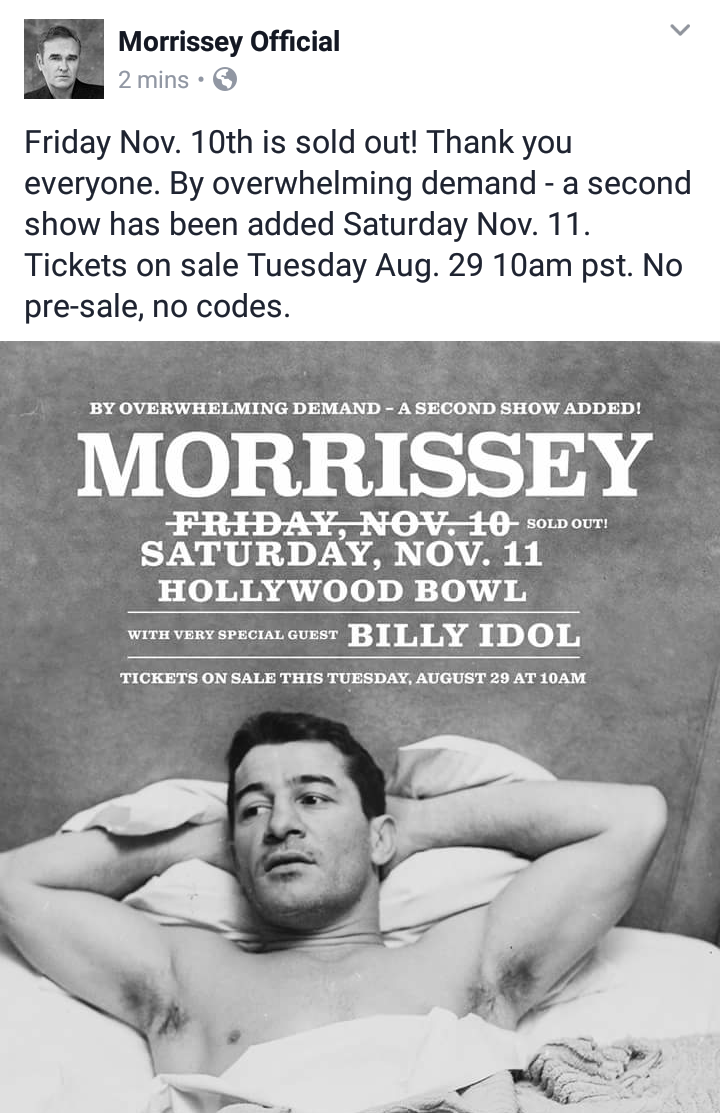 Regards,
FWD.
Some of us is turning nasty
A

Sal Chicho said:
What is the face value of that ticket? They were gone by the time I got in to the system.
Click to expand...

Ketamine Sun said:
It's not too far from the 'Kiss me a lot' video. Maybe Billy will inspire Sammy with ideas for the next M video!
Click to expand...

"I love you Moz!" So when did you last see your psychiatrist, hmm?
"Yesterday. She said it was okay. She loves you too oo."

Wonder what Morrissey thinks of Billy Idol's leather jackets and trousers.
Get out of my pub!​
A

12" on the slack said:
Wonder what Morrissey thinks of Billy Idol's leather jackets and trousers.
Click to expand...

You're too clever for your own good 12" on the slack (love the name by the way, laughed my 6" bollocks off when I first came across it)

So ! Back to the question. You raise a good point but one must understand that the issue that a staunch vegetarian/so called vegan would have reservations about sharing a stage with a performer who is guaranteed to shift a huge amount of tickets despite being advertised as the support act/wears leather/possibly eats meat n cheese ? All these things don't matter ! Thrown out of the window ! Turn a blind eye !
The animals are way down the list at this point !
Steve is well known for turning a blind eye to his so called beliefs/standards and has indeed been caught out on many occasions. To list a few and prove my point, further research the following.

Film footage showing Steve driving plush luxury cars with . . . . ! Got it one

luxury leather seating.
Pestana gate ! Steve foolishly got caught out by yours truly conducting an interview in a 5* hotel glossy brochure swamped with opulence at the cost of animal suffering. (It's on film so that's gonna prove a tough nut for the bots to fend off ).
CheeseGate ! ! If I may indulge you ! " Not once but twice " It's a very well known fact that BrummieBoy exposed Steve smuggling Kerrygold Dubliner cheese backstage on the rider and further down the line was exposed once again for dairy cheese crime when the " talented nephew " handed over the crew catering menu to Dickie Felton, who as a result got terribly giddy and posted it online

.
I could go on but it's all out there for all to see .
Any challengers most welcome

Steve even performed at Glastonbury ! Which by his own words described as being " Not animal friendly "

I'm sorry 12" I've got carried away. Basically he's a lying, CrankFraud, money making old fart who has been caught out. History is on my side full stop.

Fond memories of working in Copenhagen, is the 'Spunk bar ' still going just round the corner of the train station ?

Love and best wishes to MANCHESTER PRIDE This weekend

I was introduced to Billy Idol by a classmate in high school with finnish parents who apparently to this day never had no one ever but he is a genius at computers and networks and travels the world alone.

He has a Miss Piggy nose so the nostrils are always tempting you to put a european power cord in them. It doesn't exactly look good on selfies taken in sunny places no matter what cool sunglasses or type of hat he wears.
U

12" on the slack said:
Yeah, Morrissey certainly wants to have his cake and eat it.

Oh, the good old Spunk bar in Vesterbro! It's still going as far as I know. They have a great selection of beers and you can smoke indoors!

I went to Canal Street when you were in your diapers. Only place open late at night when football fans needed a drink and a laugh.
You must log in or register to reply here.