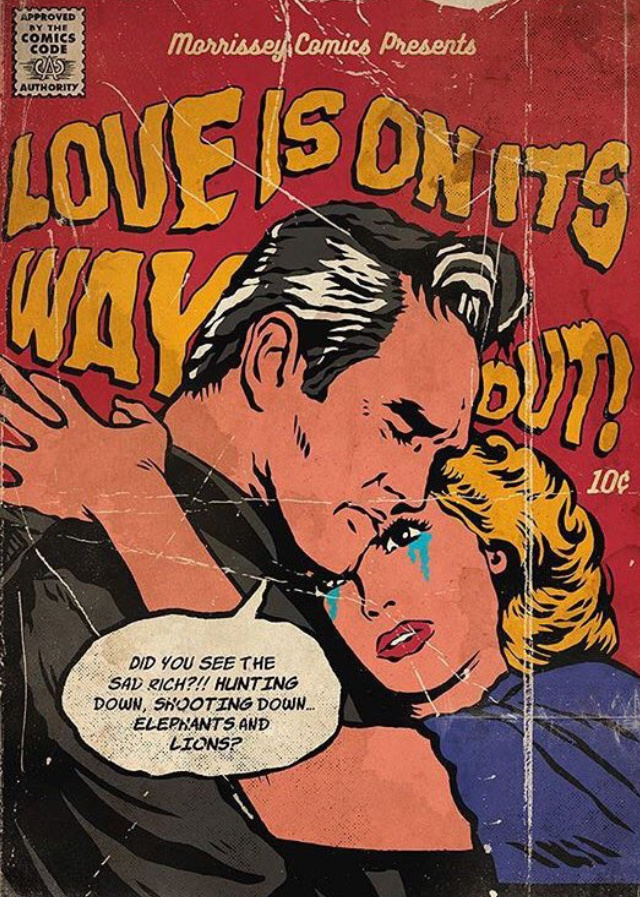 ('Illness As Art' was also used on the dead wax matrix message on the Meat Is Murder vinyl album).

I love it!
I already booked the new album, but from his own website. I must say the cover is not that good. There are better photographs of Morrissey.

Anonymous said:
I think the cartoon illustration is superb as a piece of art However I question why the illustrated Morrissey is not cuddled up to a man as he is in real life. Why is it so heterosexist? On that basis it fails. Shame.
Click to expand...

the shame is on you for presuming something which has never been substantiated.
rip roaring,free scoring,never boring,glasgow celtic.
A

Maybe she really wanted him but he had to tell her she can never have him because she has the wrong anatomy.He's not into lady parts and she is devastated as he tries to console her. She even thinks of having gender reassignment surgery as an alternative to the suicidal thoughts he has driven her to.He seems to find amusement in being vague which is ANNOYING. There are so many young , gay and out people nowadays they don't hide this .
A

Pokey said:
Just imagine, this guy is out there in society somewhere. He could be standing next to you in line, he could be riding with you on the bus. He is out there masquerading as a normal human being. Then he comes home and secretly writes this stuff on the internet.
Click to expand...

Absolutely agree. He has three posts in a row, one more disfunctional than the last. Best to ignore.

Kirk Douglas has sadly died. Morrissey will be inconsolable; I’m quite sad myself. The last of a certain generation of Hollywood legends.
A

Hovis Lesley said:
Kirk Douglas has sadly died. Morrissey will be inconsolable; I’m quite sad myself. The last of a certain generation of Hollywood legends.
Click to expand...

Who gives a shit what Melvis thinks about Kirk’s passing? f*** Melvis. Kirk goes down as a legend. Melvis goes down like whiny little bitch. You follow?

Hovis Lesley said:
Kirk Douglas has sadly died. Morrissey will be inconsolable; I’m quite sad myself. The last of a certain generation of Hollywood legends.
Click to expand...

Terrible that he was sad. I was led to believe he was quite content, having lived to 103.

Anonymous said:
Who gives a shit what Melvis thinks about Kirk’s passing? f*** Melvis. Kirk goes down as a legend. Melvis goes down like whiny little bitch. You follow?

eh no we don't,kirk goes down as a legend,you couldn't even give me a top five of kirks films without going to imdb.
rip roaring,free scoring,never boring,glasgow celtic.
C

Anonymous said:
Does anyone here, who’s scraping and scouring for Morrissey’s love and care know that he murdered his own cat? Do you think he cares about you? He killed his own cat and made a t-shirt to sell. Jesus f***img Christ, even the Bible doesn’t cover this level of scumbagarry. He ordered a vegan diet for an animal that’s a f***ing carnivore. That’s why Dude is dead. He was f***ing murdered by a weak-ass, absentee, narcissist f***-tard who doesn’t have a care or clue about how to deal with people OR animals.

I blame his mother. Obviously, his dad took one look at him and split.

...and since then, Melvis has hacked away at and shit all over EVERYONE who’s had his back.

I really think it’s time to let all of this go now... it’s getting a bit unnerving with you....
A

Anonymous said:
Terrible that he was sad. I was led to believe he was quite content, having lived to 103.

Yes, let the thieving begin.
All to make Morrissey look great of course.

You, and your parasitic ilk, thieve attention via this Morrissey site on a daily basis.
Last edited: Feb 6, 2020

Anonymous said:
No. He’s a raging bottom. He gets pounded like a champ. ...and that wouldn’t even be an issue, if he had the balls to own his own sexuality. You know? The f***ing THING he’s based 2/3 of his career off?

Nobody gets this, eh? EVERYONE around here has had the full-frontal.

At least you’re all here, where Nurse Ratched can keep an eye on you.

It’s only you racing to the bottom. But keep telling yourself that’s life’s end, and treasure your loser’s trophy. That’s now two polishing jobs for you; to keep you busy whilst you’re not making an utter c*** of yourself on here.
Last edited: Feb 7, 2020

Looks more like 'Paul can't Sing'!
Sick to death of JJ and Kewpie...

Except, we all know he can.
You must log in or register to reply here.