For the Twinkle fans – Girl in a Million: The Complete Recordings (2019)

Twinkle – Girl in a Million: The Complete Recordings (2019) | exystence

Twinkle – Girl in a Million: The Complete Recordings (2019) 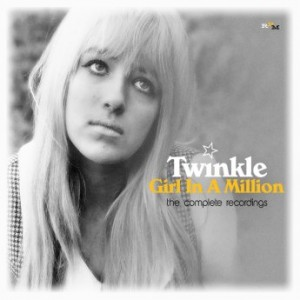 Unlike a lot of singers in the early-’60s pop scene, Twinkle didn’t wait around for anyone to pen songs for her. When she was 14, she wrote the brilliant girl group death ballad “Terry” and her recording of it became a big hit in the U.K. Though none of her other songs quite reached the same commercial heights, she didn’t stop writing and recording throughout the ’60s and ’70s.
Girl in a Million is a nice collection that includes her mid-’60s girl group singles for Decca, late-’60s mod pop songs cut for Instant, two songs recorded in 1971 for the President label that were never released, and a singer/songwriter album made in 1974 but also never released. There are also some rarities like a German version of her song “Tommy”; different mixes of “Terry” and
”The Boy of My Dreams”; a raucous live version of “Sha-La-La-La-Lee” recorded in 1966; a truly awful novelty single she made with her MP father in 1975 under the name Bill & Coo; her 1982 single that includes a synth pop take on “I’m a Believer”; and four previously unreleased demos that sound like they were made in the ’80s — the clue being the Simon LeBon reference.

It’s a lovingly put together package, annotated by Twinkle’s sister Dawn James and sounding great thanks to the remastering job. The early girl group songs have aged the best; “Golden Lights” is the equal of “Terry,” maybe a little better thanks to her more assured vocals. The rest of the early singles are fun and light — not quite Sandie Shaw territory but not too far behind. As times changed and her sound evolved, there were plenty of highlights. Her “Micky” is a sweet Motown-style love song with a rollicking chorus; 1971’s “Michael Hannah” has some biting guitar, swinging London drum breakdowns, and one of Twinkle’s strongest vocals; and quite a bit of her singer/songwriter album is good, especially the very poppy songs like “Caroline” and the big band swing-influenced “Ladyfriend.” Her light touch suits the material, and she wrote some sneakily good ballads, too. “Days” is a lovely baroque ballad filled with longing and regret, an acoustic version of “Michael Hannah” is even more heartbreaking, and “Joanna” is frothy, tender fun. These songs and everything that came before show that Twinkle was more than the girl in the cute hat who sang “Terry,” and this collection proves it. It’s also a fascinating slice of the ’60s pop scene and how this unique songwriter and performer attempted to navigate the turbulent waters.

315 MB 320 ** FLAC
"If I knew where good songs came from I'd go there more often." Leonard Cohen
"I’ve always held the song in high regard because songs have got me through so many sinks of dishes..." Leonard Cohen