Morrissey's most dedicated and well-travelled fans are being invited to be part of a new book.

"Morrissey International Airport" - travels with the Moz Army - will focus on fans who journey great distances to attend concerts by their hero.

Author Dickie Felton, 37, from Liverpool has already published one book on the phenomenon of Morrissey fans. His 2009 tome: "The Day I Met Morrissey" contained stories of fans who had met the legendary singer.

The work became a Piccadilly Records Top Ten Book of The Year and a Waterstones "Most Recommended" book.

Now Felton hopes to get material and interview fans on Morrissey's forthcoming summer tour.
He said: "It is remarkable that fans will travel continents and sail seas to follow this singer. I'm particularly interested in people who journey great distances and want to learn about their experiences on the road.

"This summer Morrissey is playing some of the most far flung and off-beat places in the UK - Dunoon, Isle of Man, Harwick, Plymouth - yet I know fans who are planning to get to every single date. And many of them don't even live in Britain."

Felton aims to get to half a dozen of the dates himself - a trip to Morrissey's concert in Inverness will take eight hours and he'll be in Dunoon the following night too.

The author famously met Morrissey in Michigan in 2007 and got him to sign his arm for a tattoo.
Felton said: "I will be sat on trains, buses and boats for days so hope to write a lot of this book as I go. It's a road trip with a few Morrissey dates attached to it.

"I hope to interview and photograph fellow fans while also collecting stories from fans around the globe about how far their dedication to Morrissey stretches."

Felton wants also Morrissey fans to get in touch who have shown their dedication to the singer in different ways.

"They may have a Morrissey tattoo, sold their house to fund a world tour or named their pet cat after him."

Anyone interested should get in touch with Dickie via www.thedayimetmorrissey.com or email [email protected] more details also at http://dickiefelton.blogspot.com/ 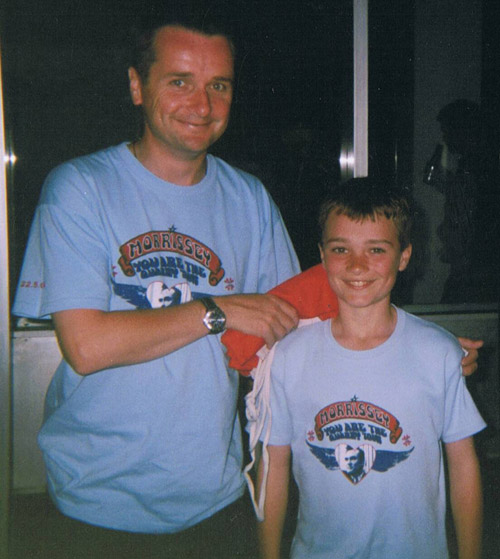 Yeah, yeah, everyone's got to have their say on everything. Utter pish pours out the curryholes of every Tim, Derek and Henry already. We don't need yet more worthless tall tells and grotesque codswallop spilling out wasting good paper.

Nobody is interested in your stories. Do not imagine anyone else cares about your self-preciousness you elitist self referencing vermin.

Let's have a day where none of you arse on and on about the time your saviour fluffed in your general direction.
Excellent stuff, never read Dickie's book, but I saw a news report or you tube clip on it a while ago.. I'm going track it down.
Great picture, the lad looks happy! he's probably been brought up on "I know it's over"

Wish you all the best with the next book, sounds like a really interesting project.
Re: Article: Fans wanted for new book - "Morrissey International Airport - travels wi


mr.m said:
Excellent stuff, never read Dickie's book, but I saw a news report or you tube clip on it a while ago.. I'm going track it down.
Great picture, the lad looks happy! he's probably been brought up on "I know it's over"

Wish you all the best with the next book, sounds like a really interesting project.
Click to expand...

I bought his last book expecting to read something about Morrissey in there because after all it was a book on people who met him but the information given was only who the fans are, where they met him and for how long they spoke to him and NOTHING about what they spoke about and what he said. Really interesting information zero.
And there was silly old me thinking there was a recession on.

On the flesh rampage, at your age. Still guess you don't have to trek around Europe following Liverpool next season (unless Swansea counts?)
Really enjoyed his last book, especially the excellent photos.
You must log in or register to reply here.
Share:
Facebook Twitter Email Link