Here you go. The recording of the interview.

The Audio of DER SPIEGEL's Interview with Morrissey
British pop singer Morrissey has accused DER SPIEGEL of falsely quoting him in a recently published interview. The magazine stands behind its reporting and has made the decision to post the audio online in response.

On Friday, Nov. 10, DER SPIEGEL culture reporter Juliane Liebert told her editors that she had been offered an interview with British popstar Morrissey and that a decision needed to be made quickly on whether to accept. We agreed: The former lead singer of The Smiths doesn't shy away from speaking his mind - and he also doesn't grant interviews very often.

The following Monday, Liebert flew to Los Angeles, where she was to interview Morrissey on Tuesday. The interview appointment got delayed several times before finally taking place on Wednesday and lasting 40 minutes. Edited versions of interviews published in DER SPIEGEL are usually authorized by the interview subject before publication, consistent with established procedure in German journalism. But in this instance, Morrissey's team elected to forego authorization.

After its publication on Nov. 18 in DER SPIEGEL, the interview (available behind the SPIEGEL Plus paywall in German) generated headlines not only in the German-language media. English publications like the Independent also wrote about Morrissey's statements regarding Trump, Brexit, the #MeToo debate and questions of national identity.

The musician then sought to distance himself from the published interview. "Unless you see the words form in my mouth and then you see or hear the words come out of my mouth... please, if you don't see that, I didn't say them," he told fans at a concert. He said he would never grant an interview to a print journalist again.

On Monday, Morrissey followed up with a post on his official Facebook page casting doubt on whether his statements had been reflected accurately by DER SPIEGEL. He also alleged that the fact that the magazine had not yet posted the raw audio of the interview was tantamount to an indirect admission of guilt.

To counter that claim, the editors of DER SPIEGEL have decided to post the audio of the interview online.

You can listen to the interview conducted with Morrissey in Los Angeles on Nov. 15 here:

Posted by Famous when dead:

Interview mp3 - yours to keep:
https://www.sendspace.com/file/dx1c0j
(the exact file as used on the site).

Moderator
Interview mp3 - yours to keep:
https://www.sendspace.com/file/dx1c0j
(the exact file as used on the site).

Perhaps someone can put the best bits over the LIHS instrumentals!?

i'm very clumsy when it comes to romance

Awful setup on the website to fast forward through the audio but this matches up with the interview in print. She shortened his answers a bit in editing, but that doesn't change what he said.

On Kevin Spacey: it's "absurd" that he's been taken out of a film and "he has been unnecessarily attacked." Annnd he just referred to Germany as the "German empire", and "I feel sad that Germany has become the rape capital of the world... Statistically, yes... and it coincides with the open borders and the 'free-flow'."

So, he's lying now because he doesn't like that the article focused on the bad things he said... Maybe you shouldn't have said them, eh? I feel bad for the journalist getting blamed, it's not her fault he's completely out of touch with reality... And on a brighter note: I just got my refund from the cancelled Boston show. Hard to reconcile with this if he ever comes round again.
Last edited: Dec 12, 2017

i can't hear the interview in full. loops after a few minutes

Subscriber
So there you have it. Will he be rushing to the lawyers? Course not. And that statement yesterday was firefighting bollocks from the Moz bunker. Ridiculous.

He doesn’t like what the media made out he said.
He stands for what he said as he said it many times before and will again.
A

Sorry can’t listen as I am at work still but what does he say about Berlin rape capital, German identity and all that bollocks?

Thewlis said:
He doesn’t like what the media made out he said.
He stands for what he said as he said it many times before and will again.
Click to expand...

Made out he said? The words are right there, on tape, you f***ing idiot. 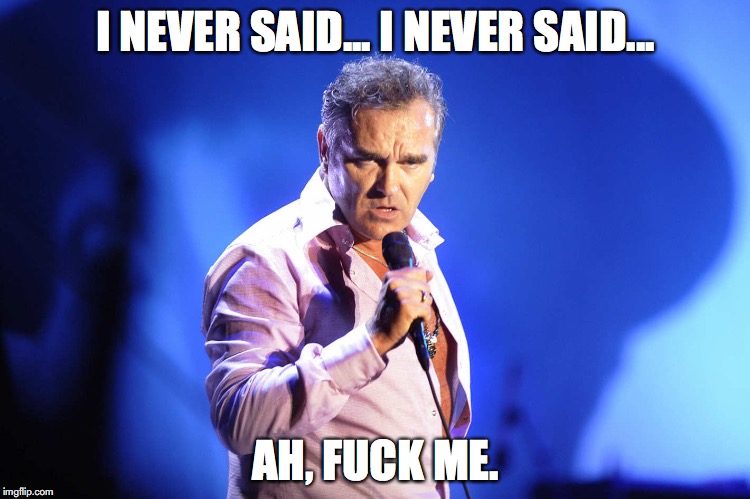 Thewlis said:
He doesn’t like what the media made out he said.
He stands for what he said as he said it many times before and will again.
Click to expand...

He stands for what he said, then why deny it, he refuted the whole printed article, once on stage last week and again this week. He knows he f***ed up, he had no choice but to lie his way out of it but he wasnt banking on them releasing the audio. Its quite sad really, he made out like the journo was a liar just to save his own skin.

Subscriber
The most shocking part of the interview, which is all there, in his own words, is what he said about the rape capital being a result of open borders. He said you shouldn't believe it unless he himself said it. Well......it's right there.

I only listened to a minute bc I’m trying to voodoo an election but that voice Good God he should just do podcasts and talk to guests. He could be very popular again no matter what stupid shit he says.

Wow. Heil Speigel has embarrassed themselves.

Uncleskinny said:
Made out he said? The words are right there, on tape, you f***ing idiot.
Click to expand...

Nice to see the moderator flaunting the terms of service he is supposed to uphold...

You agree to not use the Service to submit or link to any Content which is defamatory, abusive, hateful, threatening, spam or spam-like, likely to offend.
You must log in or register to reply here.