The Foo Fighters frontman revealed he was a fan of the ‘Bad Guy’ pop star earlier this year, after his daughter began listening to her music. “Are you kidding?” Eilish said in response, explaining that she grew up on Grohl’s work.

Appearing on Josh Homme’s Alligator Hour radio show, the musician has now compared Eilish’s fanbase to that of the former Smiths singer – explaining how seeing her live for the first time “felt like you were a part of something that was just about to explode”.

“It’s the connection she has with her audience – she’s like Morrissey,” said Grohl. “It’s like the kids who are there at the show, and not just kids, the people that are there are just like they are so into the scene like that world.”

Homme, who said he listened to the singer on the recommendation of Grohl, agreed with the praise. “Yeah, something is starting,” he said of Eilish’s impact. 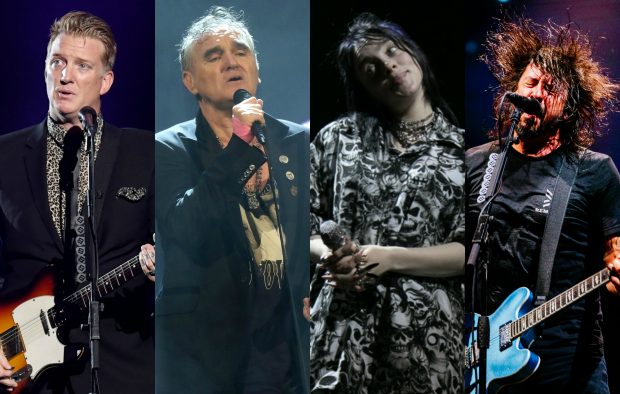 To me, Billie Eilish represents everything that Morrissey hates in modern music.
Don't know anything about her live act through.

Was Dave on something at the time when he compared this kid with Moz?
B

Billie Me A Lot

Why did Dave Grohl compare Billie Eilish to Morrissey? Has Billie also been falsely accused of being racist like Morrissey has?
A

Dave is saying the fan base is the same, not the music people!

B.E. is an industry plant. Morrissey was genuine indie and pure original

I listened to her latest album. Scratch that. I tried listening to it. It just rings as superficial weirdness with no substance whatsoever. Painfully try hard. Of course she'll "explode" but it won't be for the reasons he's thinking of. My bullshit detector went off when I heard her music and it's going of now hearing Grohl's comments. She may have fooled Dave Grohl but she doesn't fool me.
Last edited: Jun 24, 2019
"It's not your bidet anymore."

Old folks wanna see something explode something as interesting as punk, Bowie, or another Morrissey to happen,
sorry, but it WONT.

Oh and here’s fans reacting to B.Eilish just in case you can’t tell them apart

Billie Me A Lot said:
Why did Dave Grohl compare Billie Eilish to Morrissey? Has Billie also been falsely accused of being racist like Morrissey has?
Click to expand...

Why did David Grohl compare Billy Eilish to Morrissey? Has Billy also got a "fan" base who can no longer think as individuals but have become a parody of Main Stream Media propaganda Propaganda - "information, especially. of a biased or misleading nature used to promote a political cause or point of view.". Morrissey has more class than either of the above mentioned "artists" and the majority of the people on this site.
K

There's a feeling I get when I listen to her or watch Billie moments on film. It's a kind of joy I can't get from anything else.

I love how empowered she makes me feel whenever I listen to any songs. I can cry and listen to any songs of hers. I can cry when I hear her voice crack because she's crying too. I can listen to these songs on loop and never get tired of it. Every part of her is too amazing to be simpled up into a genre. She can cry, smile and joke almost right after, and that shows how strong she is. She sings with her fans in concerts and jumps around. She doesn't care how people think of her, but at the same time will speak out for other people. Her personality and music just screams "Billie Eilish". I'm so lucky to have discovered her and be alive and be able to witness all of this.

any singer who holds the microphone towards the audience is a total fraud,your job is to sing not let the audience do it for you,robbie williams can go through a whole concert without completing a whole song,its usually to hide a high note or your just shit live.
its not me its you.

anybody who mentions for Britain 11 times in one post might be accused of having something against them,you don't say.
its not me its you.

watched that video above,that lassie canny sing.she is awful and I like to give people a chance,tries to be indie but it just feels so manufactured.
its not me its you.

I thought the last "Morrissey video" by Waters was quite absurd. She was mostly angry because the media got obsessed with Morrissey, but such thing didn't involve many mentions of "For Britain".
I honestly found it childish... And a desperate attempt to use Morrissey as to get some attention.

Pretty Girl with Boring music. She is more an actress, an H&M model.
This gloomy appearance reminds me more Marilyn Manson than Morrissey
https://smiths1982.wordpress.com/

It's easier to try and work out what musicians/performers aren't "industry plants". Ed Sheeran, Taylor Swift, etc, etc... are all vapid, say nothing, glorified hacks.
"It's not your bidet anymore."

gordyboy9 said:
watched that video above,that lassie canny sing.she is awful and I like to give people a chance,tries to be indie but it just feels so manufactured.
Click to expand...

Her brother is co-writer of all she does and he was in U.S musical show Glee - i think that says a lot about how manufactured she is .
Its record industry box ticking and music for the self harming generation

Kennethwilliamsunderstudy said:
Her brother is co-writer of all she does and he was in U.S musical show Glee - i think that says a lot about how manufactured she is .
Its record industry box ticking and music for the self harming generation
Click to expand...

speaking of glee I went to school with cory Monteith. true story!

Lydia Night on her collaboration with Billie Joe Armstrong and Morrissey - Kerrang!