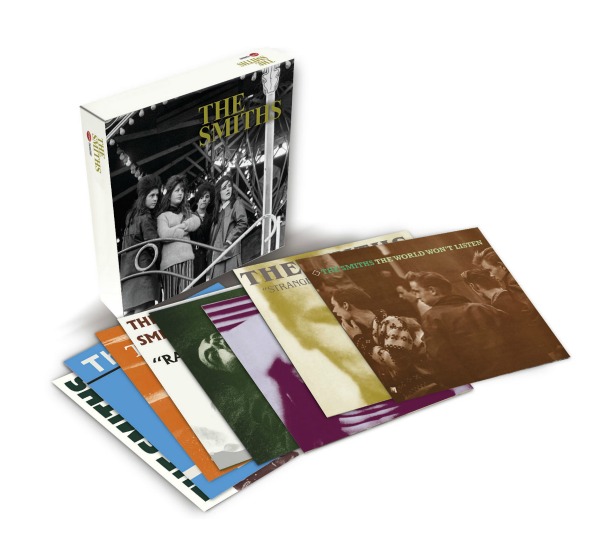 Last September, we gave away a copy of the super-deluxe CD-and-vinyl version of The Smiths’ career-spanning Complete box set to one lucky Slicing Up Eyeballs reader, and now, with the newly remastered albums released individually, the fine folks at Rhino Records have provided us with three copies of the 8-disc CD box set to give away.
The Complete box set collects all eight Smiths’ albums: The Smiths, Meat Is Murder, The Queen Is Dead and Strangeways, Here We Come, plus compilations Hatful Of Hollow, The World Won’t Listen and Louder Than Bombs, and the live Rank — newly remastered by guitarist Johnny Marr and engineer Frank Arkwright from “the original tape sources.”
All eight albums also were released as individual CDs earlier this month.


To enter to win one of three copies of the Complete 8CD box set, please leave a comment — any comment — below. [at http://www.slicingupeyeballs.com/2012/04/12/the-smiths-complete-box-set-giveaway]

To make it interesting, feel free to share the story of how you first feel in love with The Smiths. Be sure to use a valid e-mail address when leaving that comment, as that is how the randomly-selected winners ultimately will be notified. We’ll accept entries until 12 p.m. EDT Friday, April 27.

The contest, per Rhino’s rules, is open only to U.S. residents.


http://www.slicingupeyeballs.com/2012/04/12/the-smiths-complete-box-set-giveaway
"If I knew where good songs came from I'd go there more often." Leonard Cohen
"I’ve always held the song in high regard because songs have got me through so many sinks of dishes..." Leonard Cohen