See you in Hannover

My first ever morrissey concert. Missed him 2011 in Berlin... but now I'm looking forward to see him in Hannover. For God's sake, I'm really excited...

brucegrove said:
The real gem of this lineup is Krakow/Cracow. Forget the huge expense of o2 and do yourself a favour..book a budget flight to Krakow, airport a 20min cheap bus ride from centre. Find cheap accommodation on booking.com, i've booked 2nights for around £30 in the centre. Watch Moz in a small intimate venue where wherever you stand you'll be close to the stage/bar (beer around £1.50) and have a great view. Spend the weekend in a wonderful cheap city and make sure to visit the delightful Wieliczka salt mine. Much the same info applies to Warsaw also where the concert is in an ancient, rundown student club but a perfect small venue literally about 10 bus stops from the main airport. Tickets at £30 are quite expensive by Polish standards and should be easily obtainable. Why not see both shows? Wed in Warsaw then take a polskibus(.com) to Krakow on Fri (5hr journey, tickets around £8 or 3hr intercity journey, tickets at £22, or fly on Lot(.com) for £32).
Click to expand...

Anonymous said:
Wow, that was a stressfull 5 minutes, they expect you to fill in all your details within 5 mintes!! But I managed to get tickets for Essen, very happy now (and off to work )
Click to expand...

cdiggins said:
will there be a fan club presale? for londons o2 arena ??
Click to expand...

Is anyone else having issues with the O2 presale? I've been hit with 'no seats found' everytime.
S


joe frady said:
So I'm guessing that the "finalised" date at Dubiln's O2 won't be confirmed until after London's O2 date has been on sale?
Click to expand...

There was obviously a glitch on the O2 Priority website this morning, which affected a great number of people. Including me. Tickets were showing as 'available' on the initial screen and then not on the next. People have obviously managed to book, given the few Tweets to that effect and the large number listed on StubHub et al. I'll try again on Friday and hope that they didn't release all of the tickets in the presale. Which has happened before.
S


ACTON said:
You can be sure he won't end with London. He will round out the year in Dublin as he has done many times in the past. Although .002% of me is slightly worried that Ireland isn't on the list yet, so I might live to eat my words.
Click to expand...

He was interviewed with stuart clarke from hot press and did say that the dublin date had been finalised. So just waiting to hear when!! Im also wondering if its gona be MCD or AIKEN that are promoting it??
A

What a cheek ! Ticket prices are incredible !!!
M. sucks
V


Chickpea said:
Were you also up late last night checking Norwegian Air flight prices out of JFK?
Click to expand...

Oh no, don't go there. Norwegian are up to a couple of days delayed on long haul flights over and over again.
V

I will arrange an afterparty at Södra Teatern in Stockholm and I am also looking at doing one in Lund. Will post more info later.
V

I bought the Berlin tickets via Columbiahalles ticket-link: http://www.koka36.de
Thought it seemed safer to go with the ticket vendor recommended by the venue...
M

Bought tickets for Roma, Bologna and Milan via Ticketone.it.

Anyone else going to Italy? I've heard the Rome venue is in EUR, the Mussolini-built barrio? Nice place, but not very typical tourist-Rome.

Can't wait to see the stage-set for the 02 Arena show. How will Morrissey possibly top his lavish production at Manchester a couple of years ago? Others like Taylor Swift & Prince have laid on lavish Hollywood spectaculars but will Morrissey once again go for the cheapo no side-screens for those in the giddy heights option? Squinting at a warbling middle-age man a few hundred feet away with appalling acoustics, transport, zero atmosphere & rip-off priced food & drink? Will he close all the Nando chicken type outlets that surround the O2?

best wishes
"BrummieBoy"
who avoids the Greenwich Peninsular like the plague!
Enjoying Morrissey's fall from grace into ignoble ignominy! 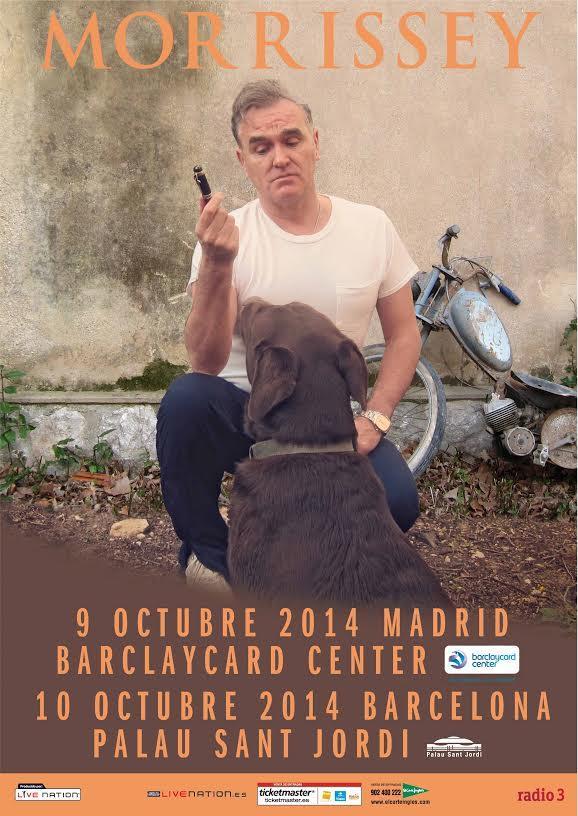 Bought tickets for Rome and Essen

Anyone else going to Italy? I've heard the Rome venue is in EUR, the Mussolini-built barrio? Nice place, but not very typical tourist-Rome.
Click to expand...

FAN said:
This is further evidence that Morrissey does not care about his fans. He screwed so many people in the U.S. when he pulled the latest round of cancellations, and he goes scheduling new dates elsewhere--ridiculous.

What is the over/under on cancellations?
Click to expand...

Nah, he has always been in the American market for one thing, money and "legend" status. He doesn't owe Americans anything. Hes British, his best music was made when in Britain, he art still ripples with Britishness. America has helped make him rich but its also created his most stupid and brain dead audience and given him a shitty guitarist in the name of Jesse. Lets not forget users like Tony and Kristeen are very American in their leaching ways. If he would have been in Europe he could have avoided them, notice how his career went down hill as soon as he hooked up with them.

This idea that Mozza was somehow American now is just toss, he likes the country but lets not get carried away

can you please stop time?

Anyone else going to Italy? I've heard the Rome venue is in EUR, the Mussolini-built barrio? Nice place, but not very typical tourist-Rome.
Click to expand...

I bought 1 for Florence, I'd love to buy another one, but I'm very uncertain: Bologna, Milano or Rome.. ?