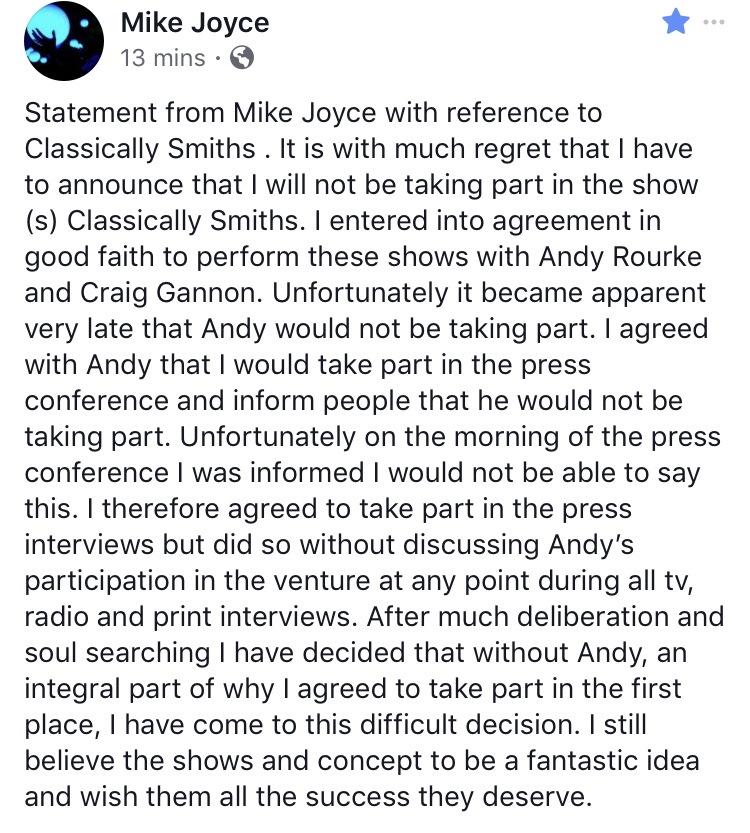 Posted by mcrickson shortly after:

Gannon's out, too. Blames Andy.

It's with regret that the Classically Smiths shows will no longer be going ahead.

Five months ago myself, Mike Joyce and Andy Rourke all agreed to be a part of this project as the core three which was why it all went ahead. Unfortunately Andy pulled out at the very last minute. This meant that all the press releases, branding and marketing etc. had already gone out so it was too late to change anything. It also meant that we were under obligation yesterday to go ahead with the press launch which Mike and myself did but were told we couldn't mention anything about the situation with Andy. That's unfortunate as the last thing we wanted was to mislead anyone.

This is disappointing as we were all really excited about putting on these shows. I for one have been working solidly on this project for the last five months and it's a shame that it's fallen apart in this way.

Anonymous said:
They could get Bernard Butler or John Squire or Jonny Greenwood (lead guitarist from 'Radiohead') to play Johnny Marr's guitar parts. James Maker would be the 'Bez' type character. What happened to Johnny Marr's friend Andrew Berry? Maybe they could get Andrew Berry to do something? They could have more than one main vocalist (and some backing singers) maybe David McAlmont, Sir Tom Jones and some others. They could also have some special effects on stage and with modern technology anything is possible these days. With the lovely, talented Dale Hibbert on bass and a full, classical orchestra this will be an awesome concert!

They are still touring with 'Haçienda Classical' and it works really well. I don't see why they can't do something similar to 'Haçienda Classical' but with The Smiths music instead? I think 'Classically Smiths' is a good idea and Mike Joyce and Craig Gannon should still go ahead with this as planned.
Click to expand...

Manchester Camerata is a British chamber orchestra based in Manchester, England. This is their Wikipedia page: https://en.wikipedia.org/wiki/Manchester_Camerata

It is strange you should talk about the "Haçienda Classical" concerts because Manchester Camerata is the exact same orchestra that has been used in some of those concerts!

I wonder if Mike Joyce and Craig Gannon got the idea to do the "Classically Smiths" concerts from the success of the "Haçienda Classical" concert tours and album?

This is a YouTube video of "Haçienda Classical" on the Manchester Camerata official YouTube channel see link:

I think they should get the 'London Community Gospel Choir' or another top professional choir on-board to do the "Classically Smiths" concerts. With good professional veteran singers like Sir Tom Jones and David McAlmont plus backing singers the vocals would be really strong! Maybe they could get the singer Sandie Shaw on-board as well?

They could get Jools Holland playing piano with His Rhythm & Blues Orchestra and his singer Ruby Turner to give it a fuller sound.

They could have photos and footage of Morrissey and Johnny Marr on large screens in the background and special effects like pyrotechnics or even holograms or maybe some acrobats/aerialists giving it a circus feel or an illusionist. As you say with modern technology so much is possible these days!

If Dale Hibbert isn't available to play bass they could get Gary ("Mani") Mounfield or maybe even Victor Wooten. Victor Wooten is an amazing African-American world-class bassist! This is Victor Wooten's Wikipedia page: https://en.wikipedia.org/wiki/Victor_Wooten

I agree with you that guitarists like Bernard Butler, John Squire or Jonny Greenwood would be capable of playing Johnny Marr's guitar riffs and guitar parts.

They could also get some top DJ's on-board and maybe even make a "Classically Smiths" album?

You sometimes get a compere/master of ceremonies at this sort of thing and sometimes comedians.

I agree I think Mike Joyce and Craig Gannon should still go ahead with these concerts as planned! They really don't need Morrissey, Johnny Marr or Andy Rourke to be part of this but they might need Morrissey & Marr's approval?

I feel really sorry for Mike Joyce and Craig Gannon because they have been let down so very badly!

What are Dale Hibbert, James Maker and Andrew Berry doing these days?
E

Anonymous said:
Manchester Camerata is a British chamber orchestra based in Manchester, England.
I wonder if Mike Joyce and Craig Gannon got the idea to do the "Classically Smiths" concerts from the success of the "Haçienda Classical" concert tours and album?
Click to expand...

I think this was clearly the promoter's idea. They asked the orchestra, Joyce, Gannon and Rourke to participate and they told Joyce not to talk about Rourke's departure during the press conference. If Joyce was behind this, he couldn't walk away that easily and just wish that the project gets the success it deserves.
A

Eldritch said:
I think this was clearly the promoter's idea. They asked the orchestra, Joyce, Gannon and Rourke to participate and they told Joyce not to talk about Rourke's departure during the press conference. If Joyce was behind this, he couldn't walk away that easily and just wish that the project gets the success it deserves.
Click to expand...

This is definitely down to BadProductions. Its a great idea (It was done successfully last year with HC. This is a project that needs to be properly managed and thats where it fell down so quickly . I doubt that any contracts were actually in place with the 3 musicians so very easy for them to say "I am not doing it as he's not doing it" and then walking away.
You must log in or register to reply here.

H
I started something I couldn't finish: the Smiths reunion that wasn't - The Guardian
17 18 19