Citypages.com - We hate it when our friends become resentful: Coming to terms with Morrissey in 2017

We hate it when our friends become resentful: Coming to terms with Morrissey in 2017 - City Pages
Monday, November 27, 2017 by Annie Zaleski
November should have been a triumphant month for Morrissey.
Last edited by a moderator: Dec 2, 2017
Click to expand...

BrummieBoy said:
The Art of Trolling has moved on:

Ironic Alt-Right-On-ness isn't Current Year, it's very, very last year, dear....you could at least have copied Trump's Britain First tweets if you were serious about winding up the moderators here.

You need to be a little more focussed. Pay attention! Your attempt should have landed on the 'NYC Madison Gardens didn't sell out, just The Theatre next door' thread where The Cult are in stitches about Moz's slap-stick stand up clown-arse , giving *CLAPS*, jazz-hands & a drum roll to Moarrissey Trump trollin with 'Trump-Shifters Of The World'.....now, there's a lesson in aphorism genie-us-isms...almost pantomime level...after that video for 'Jacky' the panto season on some windy pier can't be far off.....

I trust they Moderating Authority Figures are not going to donate a rage spiral to your Troll Token stash. But if they do.....I guess it's 'moar lulz'...actually.....is this my son? Upstairs?......how droll, trolling Daddy....FAIL!

It's just a fact.The BNP love and respect Morrissey.
Telling you this makes me a troll?

Anonymous said:
It's just a fact.The BNP love and respect Morrissey.
Telling you this makes me a troll?

I'd say it does, mainly because its not true, never known a "political party" to love and respect any artist.
P

Anonymous said:
It's just a fact.The BNP love and respect Morrissey.
Telling you this makes me a troll?

Joking apart,is this true?
I recall at a Moz gig a bunch of fascists chanted and saluted Nazi fashion at the 'england for the english' bit of National Front Disco. I had hoped that this was some weird aberration.
A

Heck yeah you can. Cruising around slow is for blasting Low In High School, but when it's time to put the pedal down, we'll just open it up and let that baby roar. You can drive to if you know what you're doing. It's going to be wild.

Anonymous said:
Heck yeah you can. Cruising around slow is for blasting Low In High School, but when it's time to put the pedal down, we'll just open it up and let that baby roar. You can drive to if you know what you're doing. It's going to be wild.
Click to expand...

I like that!
Very kind of you.
I guess the Dodge Charger has the automatic gearbox?
Just asking to know before I know what I’m doing.
Just used to drive with shifting gear by hand and using the clutch pedal.

Anyway it doesn’t matter, I will enjoy the ride with this beast in the passenger seat. Nice car!

"I love you Moz!" So when did you last see your psychiatrist, hmm?
"Yesterday. She said it was okay. She loves you too oo."

BrummieBoy said:
What a wonderful synopsis!

Thank you so much. This is a neat summation of the dreadful pre-cursor to his current cognitive apocalypse. I don't recall those interviews. I'm not really that much of a 'fan' but I can grasp it all with my super-sleuth search-engine mad skillz. That's one of the reasons GCHQ recruited me as a spy. Sort of online James Bond...

Thanks BrummieBoy, although I see one of the mozbots gave me a 'troll' rating for my effort. If they're not careful I'll get my evil twin to write another 2000 word critical essay about Morrissey and really make the cult break out in a sweat and come out in force again on another thumbing down and 'troll' assigning spree.

It's unsurprising that Morrissey thinks the way he does; here's a man who never started a family or found any deeper meaning to life outside of money and C-list celebrity. An entirely self-serving existence, he's not used to showing empathy towards anyone other than to himself. But his years spent alone will never be returned, and I believe the realisation that his life is empty beyond his superficial pursuits is beginning to gnaw at him, so he's lashing out to an unprecedented degree.

You made a pertinent point, one of many, in your LiHS review about his flirtation with Judaism and how he conflates it with Zionism; personally I can see him converting over the next few years, retiring, and settling down in Tel Aviv by his mid-60s. Partly in search for some kind of inner or spiritual peace, partly to spite the international community as he "can't understand" the condemnation Israel receives, nor the BDS boycott (although presumably he understands his own Canada boycott).

He'd have a lot to learn though during his conversion process, in 'Israel' he sings that 'if you're happy Jesus sends you straight to hell', but Jesus isn't a prophet in Judaism, so why mention him at all in a song about Israel? He wouldn't have known that about Jesus of course, because it's not like he does any research before - or after - writing his politically charged lyrics.

Another error on par with the Royal Family apparently saluting Oliver Cromwell -- a man who fought against King Charles in the Civil War, with Cromwell's side winning and Charles being killed, after which he appointed himself Lord Protector of England, Scotland, and Ireland and ruled over them for around a decade, then died and his dug up body was hung drawn and quartered, with his death bringing about Charles II coming out of hiding in France and being restored to the throne. Why would the Queen salute any of that?

It's not like the interregnum period brought a regime change from which she descends and would make her thankful to Cromwell for setting it all in motion. She even named one of her sons 'Charles', not 'Oliver'. I'm going off topic a bit but I don't think I've ever seen anyone attempt to explain what his thinking was when he wrote that lyric. Now he pulls another howler out of the bag with Jesus sending happy Jews to hell. (Edit: or is he attempting to compliment Jews by insulting Christians? Either way it's a stupid lyric.) Whatever the reading, one can only naturally conclude that Morrissey is an imbecile.

Born to Harangue slips into a trance and begins writing out all his deepest desires, unbeknownst to himself
My dream is for all anti-Morrissey activists and debunkers to get an ethnostate of their own. That would be my Zion. One of our national holidays would be May 22nd when we exchange gifts and burn effigies of Morrissey while all the children hold hands and dance around the flames.

Although at the rate things have been going our state might need to be a place the size of Russia to fit us all in, plus there are numerous others who are converting every day, so perhaps it's not feasible. But a man can dream.
Born to Harangue wakes up.

I don't know what happened there. I think my evil twin might have commandeered my person again for a moment in an attempt to get me in trouble.

I'm actually not sure if he's a separate person or if he lives inside me. Or do I live inside of him? My existence is ambiguous. Anyway, that's neither here nor there.

But now, at any rate, while I'm here and in case either you or I don't reappear over the next few weeks, I would like to get in there early and send you and your whole family the warmest greetings for the holidays ahead. The same for Benny the British Butcher and his young family too if he's reading this.
I wonder how Morrissey will spend his Christmas Day? Sitting around a 5* hotel room with Diesel with the curtains drawn or will Jesse Tobias or Gustav Manzur invite him to come and eat with their families (but probably not because then the turkeys they're planning to serve will have to go to waste.) 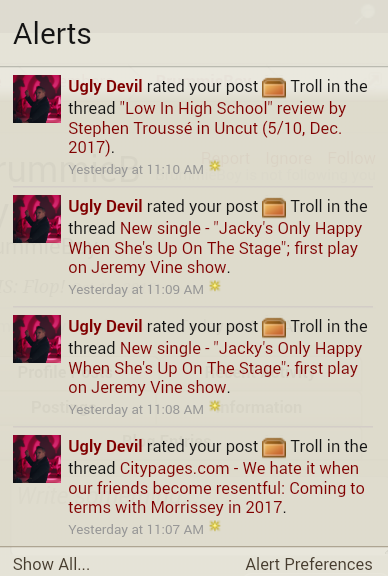 Quando quando quando said:
I like that!
Very kind of you.
I guess the Dodge Charger has the automatic gearbox?
Just asking to know before I know what I’m doing.
Just used to drive with shifting gear by hand and using the clutch pedal.

Anyway it doesn’t matter, I will enjoy the ride with this beast in the passenger seat. Nice car!

Oh yeah, definitely stick shift. The Dodge Charger is all about having fun. When I'm not blasting Low In High School, my secret music weapon is Beethoven's 5th. Pull on up and then play "dun, dun, dun, dun - dun. dun, dun, dun" and then just floor it - Vrooom!

BrummieBoy said:
The Art of Trolling has moved on:

Brummie you make it fun to visit this site. As a stock broker, I am up to my neck in Bitcoin queries. I work with numerous Millennials and at a meeting I brought up the subject of "New Wave" music that was met with blank faces. Life is like standing on one of those airport tread-ways that pull you along without taking a step. You are here and then seemingly without effort you are there. Time is a heartless friend.

It is interesting how much energy and effort Morrissey puts into protecting his precious historic output from the likes of beer and car commercials, but seemingly takes a machete to his reputation as a meaningful and respected artist that we all know he was at one point in the distant past.

The present doesn't interest him. It never has. His most moving lyrics were based on and are in the past, and reflecting on how great it was in the old days. Look no farther than "Back to the Old House" for an example of this. He is the king of introspection. Now it is up for grabs what this Morrissey 2.0 will bring. I pray for a reboot.
Last edited: Dec 9, 2017
You must log in or register to reply here.

A
Letter to the Editor: "Morrissey is still a dick" (NOW Online Canada)