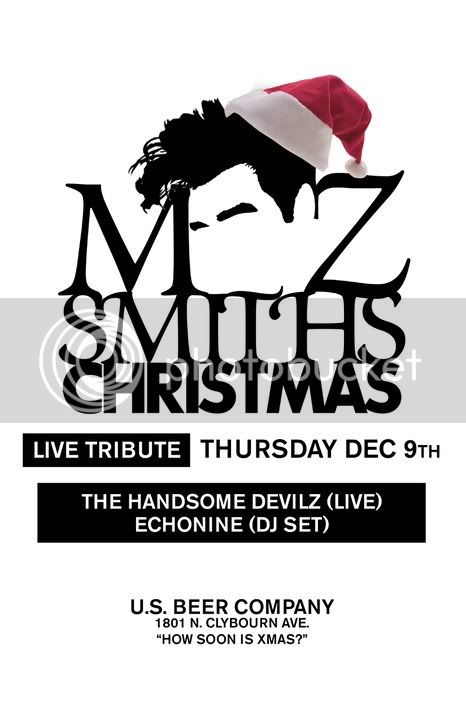 The Devilz will be doing a double set, the last one for a while! This is the second to last show before their hiatus (last show at the Abbey on Dec. 30th)

Joining the band will be (brother) Frank De La Mora and Tony Macias from Echo Nine doing the DJ sets for the night.
The Devilz will also be celebrating bassist Mike Gatny's Birthday

Devilz are thinking of dedicating their first set to Bona Drag in celebration of the re-release of the album. Also, songs on the back burner include "Well I Wonder", "Sister I'm a Poet", "Throwing my Arms Around Paris" and "Barbarism begins at Home" just to name a few!

Big thanks from Joe and the band for your support over the years!


I can't believe this thread got archived http://forums.morrissey-solo.com/showthread.php?t=110419 Their last show of 2010 and guitarist Mary's last show with the Devilz.

From lead vocalist, Joe: "It's been a great time learning and performing Smiths / Moz tunes for you Chicago. We are grateful for all the cool people and bands we've met along the way. We'll be taking a long break and hope to somehow regroup sometime next year. We are honored to have these Bands and Djs joining us on Dec. 30th @ The Abbey and Happy Birthday to Phil De La Mora!"

The Devilz are taking it on the road! The Handsome Devilz return to Debonair to give a double dose of Smiths/Morrissey love! 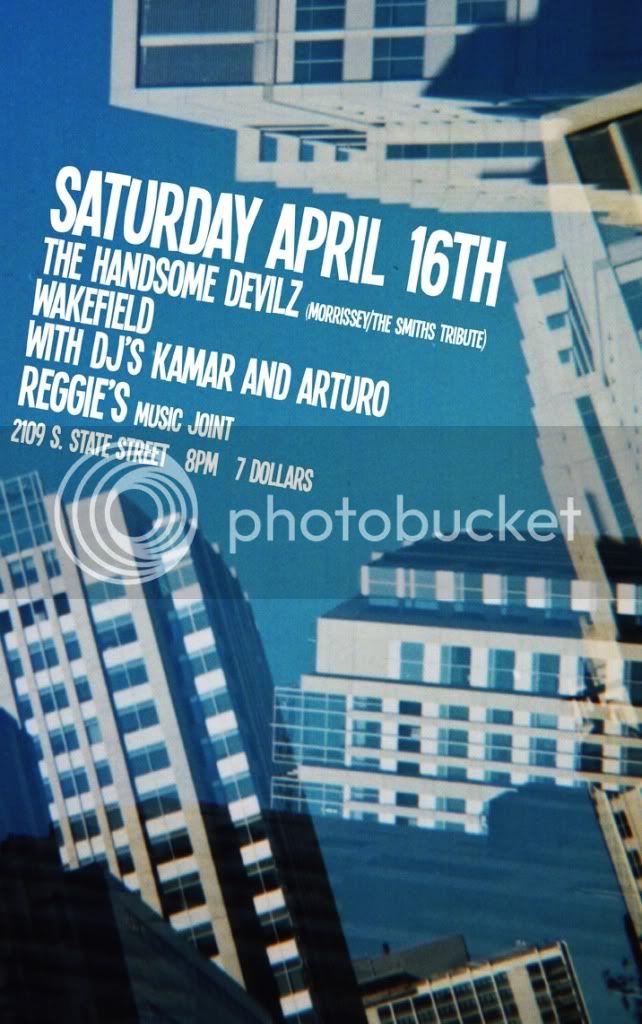 Is it me or do these guys always seem to play around the same time that These Charming Men do here, Corrissey?

I am a Ghost said:
Is it me or do these guys always seem to play around the same time that These Charming Men do here, Corrissey?
Click to expand...

O RLY!? Interesting! Me thinks it's just a coinkydink, but a very cool one at that!

Corrissey said:
O RLY!? Interesting! Me thinks it's just a coinkydink, but a very cool one at that!

Hmm, it's all part of some grand conspiracy, or the Illuminati, or something.. Come get your Smiths/Moz and Radiohead fix!

p.s. The Chicago Cubs host a 3 day street fest on the West side of Wrigley (that's Cubby Bear side) for the Cubs/Yankees series.
No shortage of drunks in Wrigleyville on Friday night! or ever FREE! and All Ages! Cool off with the Hot sounds of the Handsome Devilz!

The Handsome Devilz return to their old stomping grounds, The Abbey Pub!
Last Year they played The Abbey Pub 11 times! After a nice breather, they are ready to return and take the stage once again with a variety pack of bands sure to please most of those out there with a pulse.

The Handsome Devilz return to The Cubby Bear once again, showing some love for The Smiths and Morrissey!
Headlining the night with some other great tribute acts: And this just in...
The Devilz will be doing an afterset for the Morrissey show on November 10th @ Debonair!

Debonair is one mile -straight down Milwaukee- from the Congress Theater. More details to follow. NO COVER with Morrissey or Har Mar Superstar ticket stub

HOSTED OLD STYLE RECEPTION from 10pm-11pm with RSVP on Facebook Doors at 8pm and show at 8:30pm. Devilz go on last, around midnight.

This just in: Shuttle bus service from the Congress to Reggies! "Everybody all aboard..."
Last edited: Dec 17, 2011

Re: Handsome Devilz - MOZ After Party

The owner of Reggies told the Devilz that kids are allowed in as long as they are accompanied by a Parent.

Still don't think that will get Skylarker there.
Last edited: Dec 17, 2011