Chad Smith, my favourite drummer ever.

Plus one of the coolest guys on the planet

No one has mentioned the greatest drummer alive...

monday said:
No one has mentioned the greatest drummer alive...

Maybe you can't stand Rush but he is phenomenal.
"Cried over my supper, it revived. Got off the table... started to fly."

Being a drummer myself, I've not into guys for their technical prowess. Its more about the parts they bring to the songs like what Bryan Devendorf from The National or Sam Fogarino from Interpol are doing these days.

I'm not gonna lie, I saw Rush on the Roll the Bones, Counterparts, Test For Echo, Greatest Hits and Vapour Trails tours and back in the day when I was in High School I thought Neil was the shit. But by the end I was bored out of my mind and not feeling the music at all. Nowadays I'd rather listen to Mike Joyce's groove on Interesting Drug then Neil Peart's drum fills on Tom Sawyer. But that's just me

bored said:
Maybe you can't stand Rush but he is phenomenal.
Click to expand...

The King of Cool! modrevolve said:
Being a drummer myself, I've not into guys for their technical prowess. Its more about the parts they bring to the songs like what Bryan Devendorf from The National or Sam Fogarino from Interpol are doing these days.
Click to expand...

Very true, but in saying that I dont think Rush would be the same without Peart,So the parts he brings, makes their sound,he actually writes the lyrics too.The band and their music are very technical,hell Lifeson and Lee are some of the most technical guitarists around and that's probably why it all fits nicely as RUSH,sometimes it's nice to hear technical perfection if only for the confirmation that it can be done,it also helps for future learning.

For me when I feel like listening to some heavy rock i will often throw on moving pictures ahead of anything else,but I admit it's been a while.
Last edited: May 14, 2009

me in 11th grade..minus doing lines of cheetos

modrevolve said:
me in 11th grade..minus doing lines of cheetos

In defence of good ol RUSH

oh skinner..the first look i had on the title i misread it as celibate drummers...

Morrissey asked my cousin where he was from. He answered Compton, which to Morrissey replied"Oh, so you're straight outta Compton aye?"[QUOTE from Ready With Ready-Wit;830350]
Ich weiss nicht, zu wem ich gehöre-ich glaub ich gehör`nur mir ganz allein"(I dont know to whom I belong to,I think I only belong to myself)Friedrich Holländer-1932-
Lifeguard, save me from life,cause it's the only life I'll ever have. Moz
"Mein Kopf ist ein Labyrinth,mein Leben ist ein Minenfeld"
E.N.
Q

I just noticed that the title of the thread was not actually "Celibate drummers", as I had it mentally filed as. I didn't even stop to think it was odd, this is a Morrissey forum afer all. Talk about letting the context determine the reading.

Skinner said:
Pictured here on the left with brothers Isaac and Taylor (Zac=hottest)

Taylor was always the best looking one and he still is! Maybe this is because I like my men to look like women, I don't know.

Best drummer to ever live, let alone actually play the drums (and he's not a bad singer either!): 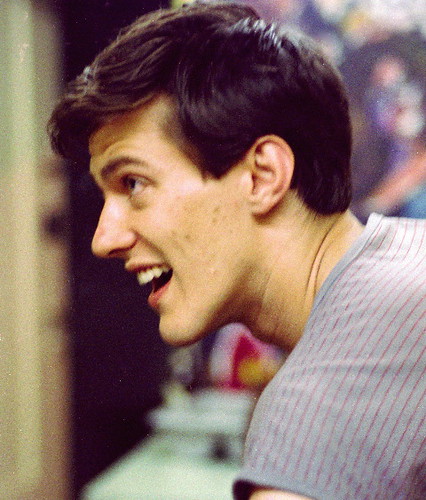 My and Morrissey's love child
P

where all the real heros?

Absolute unknown drumming god. He's Ween's drummer, watched him do a 30min solo as part of a 3hr set they did last year. Just for some drumming awesomeness check out youtube clips of songs like "Man and Woman" and "Johnny on the spot" .. the guy is insane, switching between drumming while juggling his drumsticks, drumming with 3-4 sticks in each hand to going bare handed. I've read reports of a gig where he wouldn't stop during a drum solo so the rest of the band dismantled his kit during the show to stop him haha
You must log in or register to reply here.