Surface said:
I had A couple of beers with Sonya the other week in London.
Click to expand...

Ketamine Sun said:
Now that’s someone who Marr should work with.
Click to expand...

She’s a lovely person and a fabulous vocalist.
V

Surface said:
I had A couple of beers with Sonya the other week in London. If you’re ever in the UK, pop into the Scarsdale Tavern in Kensington which is her local.
Click to expand...

you 'HAPPENED' to pop into her when you just happened to pop in at the tavern.

while walking the pooch around the cul de sac

you 'pop' into her, into Mani, into Hooky, into Bernard...

You bring up a good point. Previously to Skinny going rogue, making multiple fake username troll avatars you could have been banned for many insignificant minor activity.
Click to expand...

Watch out, you used your Ketamine Sun voice on your Vegan cro post. You're slipping.
D

Mozmar said:
Yep grats to jim, but we should all say the same to our hero/God Morrissey:

How can we ever adequately express our gratitude to you for what you have given us?

I'm so grateful that I found Him.
Click to expand...

and that he does not ban all cameras from his shows.

Ketamine Sun said:
Now that’s someone who Marr should work with.
Click to expand...

good god that would really be something!
A

reelfountain said:
Another show packed to the gills.

I thought they were all supposed to be empty?
Click to expand...

How is a completely empty lawn “packed to the gills?” There are more lawn tickets than seats, so do the maths. 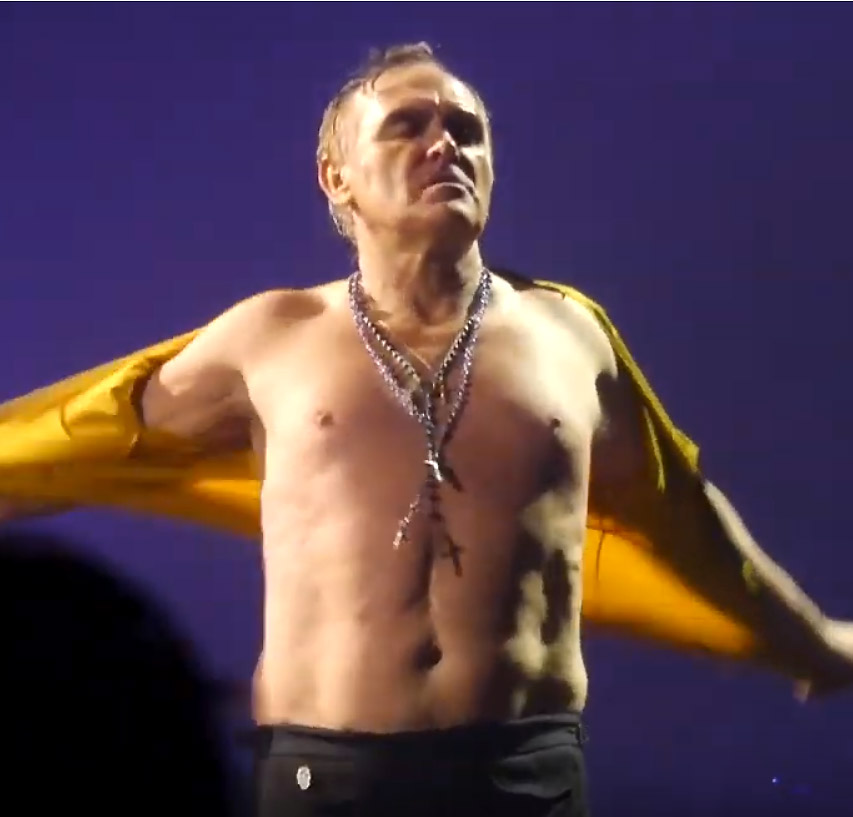 I started extracting from videos on “youtube” the MP3, to post them later in the section Downloads / Bootlegs.

I have the impression that one is better than the other, for the sound quality, and I would like your opinion before extracting .

GirlAfraidWillNeverLearn said:
Not my video but I found this snippet on Instagram:

Thank you for that.
Delighted. Perhaps he'll sing it in its entirety on this tour.
B

Anonymous said:
I believe your referring to Charles Aznavour?
Click to expand...

Yes thank you! I would like to look into his other work
A


I think he was definitely annoyed. It was bizarre, reely. Baffling. Perhaps it's these American audiences that cheer at everything.
It really doesn't translate well...​
I remember that q and a in 92 when he was reveling in it.
And Craig Kilburn

They're cutting him off with the applause! So strange. Is there some cultural divide here?​
I

Tom said:
Solid show overall, with a great crowd. This crowd was the best of the first three in my opinion. They seemed really responsive, even to the covers and lesser known songs and Moz seemed genuinely appreciative. So much for the reports of terrible ticket sales for this show, it seemed pretty well filled, with empty seats only at the very, upper sides.

He really needs to drop Paris, it’s become the floodgate song where everyone goes to the restroom or grabs a drink. No one cares about this song. Actually, the city of Paris needs to stop making headlines, so the song can become irrelevant again. I doubt most people in attendance even know about the protests. Thankfully World Peace seems to be gone, I hope Munich Air Disaster will be next, it’s a flatline every time. Slip in something like Our Frank, Mute Witness, Nobody Loves Us or We’ll Let You Know in their places and this set would be killer. Anyway, I enjoyed the three east coast shows, the venues have worked surprisingly well so far.
Click to expand...

I think the crowd was so enthusiastic because most of us got much better seats than we paid for - I certainly did! At the start of the show he was pretty perfunctory - sang well but not much interaction with the audience. But he definitely warmed up when he felt how responsive the audience was - maybe to make up for the lack of a crowd. It did seem to make a difference and I agree he seemed appreciative.

The crowd size wasn't as dire as those articles went on about but it wasn't packed either and I suspect there were a few comp tickets given out. Not to make excuses but I think the location was part of the problem. If you were on the fence about going the fact that it was at the BB&T pavillion with its highway robbery parking and nothing else around if there was a cancellation would probably dissuade you from going. Plus it was a Monday night at the beginning of the school year. Those factors - plus a set list with a lot of songs I've seen him perform many many times - almost stopped me from going - but I went anyways and am so happy I did - he put on a great show. I just accepted the fact that I was going to hear a fair number of songs again for the umpteenth time. I focused on enjoying how well he sings them and how the band supports him. And the great view I had of the show ;-)

Before Morning Starship he said something like, "This song was written and sung by a waif from Pennsylvania - and nobody knows who he was." When people yelled out "Jobriath" he responded "Goliath?" and shook his head.

As somebody said previously, he mentioned the bad reviews California Son received and said
"But like the humpbacked whale, I keep soldiering on..." and I agree he did sound resigned rather than defiant.

As for Paris - that song started up and I was about to turn to my friend to say "not this one again" but she got so excited - "I love this song!!" and started happily singing along - so I sang along too. Still I'd have no problem not hearing that song from him for quite a few years.

Hope the rest of the tour goes well and can't wait to hear about it from others! He's not getting any younger and neither are we - so enjoy!!
P

Mazzer6 said:
Does anyone know the origin of the pre-show video where those detectives are talking about how they ‘have to take care of Morrissey’? It looked like it was from an old black and white tv show.
Click to expand...


the untouchables. popular early 60's tv show . it was about organized crime during prohibition in Chicago( al capone, etc)

Surface said:
She’s a lovely person and a fabulous vocalist.
Click to expand...

that maybe but have you checked the seating plan for her next gig.
its not me its you.

gordyboy9 said:
that maybe but have you checked the seating plan for her next gig.
Click to expand...

Echobelly have nothing planned at the moment but the May tour this year was a sell out.
Last edited: Sep 11, 2019

I started extracting from videos on “youtube” the MP3, to post them later in the section Downloads / Bootlegs.

I have the impression that one is better than the other, for the sound quality, and I would like your opinion before extracting .

Personally , when I extract, I record all of them and sort accordingly ....the best going under the main title of trying to complete a whole show and then the other recordings seperate as AKTERNATIVE VERSIONS from that date......I do wish more people would record and post on YT because 60 seconds of Instagram is just a tease and really does no justice unless there is no you tube recording of that particular song ,then it falls under "a little is better than none" and beggars cant be choosy when wanting recordings of a certain show,especially one they didnt attend because of one thing or another

I also believe the recording people ,the unselfishness of fans like Doc,Jpowers,youself,FWD, and few others that do help others see the show thru their eyes are far and in between. I'm one fan that will always be appreciative of there works. And I'm planning to repay this loyalty with recording of the Houston show in a couple of weeks .

So thank you for your valid efforts, you are a winner and the reason I put up with the negative souls that lerck here, in the dark behind the curtains. So please dont stop doing what you do and others please record and post to keep the history of Morrissey alive forever

He came back to Camden - and he was...great!

lanterns said:
just wanted to say a big "thank you" to jim powers, who provides and shares all these absolutely excellent videos on youtube!

lanterns said:
how can we ever adequately express our gratitude to you, jim powers?!?

Thank you for sharing this. Oh my god, his voice. It's perfect, I have no words to describe it.

Anonymous said:
Was Mon Laferte song part of the morrissey pre-show videos? Thet would be awesome, Mon Laferte is such a great singer.
Click to expand...

Yes it was.
Apparently, it's all down to SER: 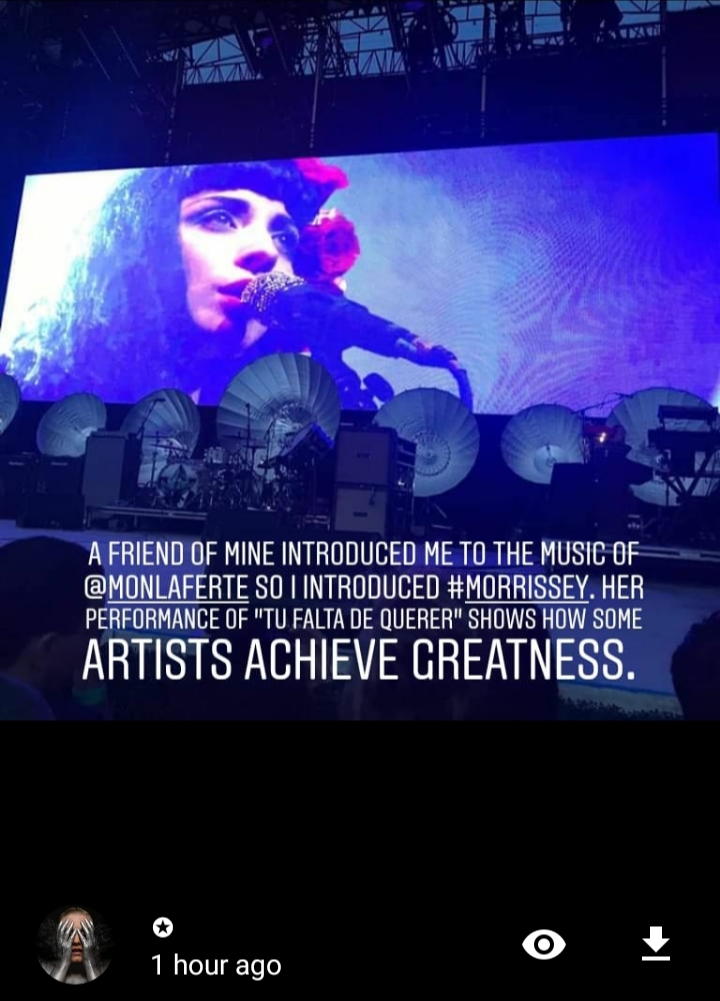 Regards,
FWD.
De gustibus non est disputandum.
You must log in or register to reply here.