Ghost of the troubled Joe

My Father, whose name was Edward,
passed away last year at the end of September.
The world is indeed a colder place without him.
He was always kind and loving and had a wonderful
sense of humour.
He had the most beautiful blue eyes.
He never hurt anyone or anything on purpose in his whole
life.
He is very much missed and now if the rumours about
heaven mean anything
he is happily with his wife who
passed on twenty years ago.......

Sharing these thoughts is a nice way to honor your father.

mauve21 said:
My Father, whose name was Edward,
passed away last year at the end of September.
The world is indeed a colder place without him.
He was always kind and loving and had a wonderful
sense of humour.
He had the most beautiful blue eyes.
He never hurt anyone or anything on purpose in his whole
life.
He is very much missed and now if the rumours about
heaven mean anything
he is happily with his wife who
passed on twenty years ago.......
Click to expand...

i'm sorry
i loved my dad alot too

i just read that marvel comics are killing off captain america after 66 years?
[SIGPIC][/SIGPIC]
Archangel risin' on the moon
Just to save me from this tomb
I'll cry the tears of time all day
'Til she wipes them all away​

I miss john Peel.I grew up listening to him and he championed the Smiths.
.....in a snow filled sky, we'll make it all right to come undone.

His humor makes me think of Morrissey somehow...can't explain why...maybe it was the way he could insult the old lady who sat next to him on the game show. 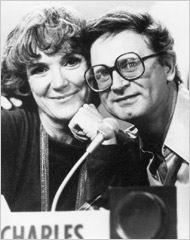 Hollywood has a bad habit of forcing actors into a neat little mold, constantly bombarding audiences with the same images of chiseled men and busty, superficial women. Charles Nelson Reilly was different. Quirky, irreverent, and always original, the eccentric pioneer lit up Broadway and won over millions as one of the loveable judges on ‘Match Game.’ .

Nelson Reilly broke onto the scene in 1962 with a Tony winning performance in “How To Succeed In Business Without Trying.” He continued to captivate Broadway audiences for a few years until surprising everyone and landing recurring roles on ‘The Steve Lawrence Show’ and ‘The Ghost And Mrs. Muir’; however, it wasn’t until a few years later that he finally found his niche.

‘Match Game’ was the perfect platform for Reilly’s bizarre and edgy humor. From catty arguments with Brett Summers to mocking Gene Rayburn, he quickly became the game show’s most recognizable star. It took a special performer to get away with gay sex double-entendres during the 1970s, and Charles Nelson was just that man.

After the long running program came to an end, Reilly stayed busy teaching acting and returning to the stage. He was even nominated for consecutive Emmy Awards in ’98 and ’99 for cameos in ‘The Drew Carey Show’ and ‘Millenium.’ Sadly, he developed a bad case of pneumonia and passed away on Friday. He was 76 years old.

Today, countless actors owe their fame to the bifocaled legend. His flamboyance and unequivocal originality paved the way for hundreds of effeminate performers to come. In fact, it was Nelson Reilly, himself, who said it best when he uttered, “I was told that I would never be allowed on television. Now I wanna know who I have to f*** to get off of it.”

Goodbye, Charles. You will be missed.


By PATRICK McGEEHAN
Published: May 28, 2007
Charles Nelson Reilly, who acted and directed on Broadway but came to be best known for his campy television appearances on talk shows and “Match Game,” died on Friday in Los Angeles. He was 76 and lived in Beverly Hills, Calif.
The cause was complications of pneumonia, said his partner, Patrick Hughes, who is his only immediate survivor. Mr. Reilly had been ill for more than a year, he said.
Long before moving west to become what he somewhat ruefully described as a “game show fixture,” Mr. Reilly was an actor and an acting teacher in New York City. In 1962, he won a Tony Award for his portrayal of Bud Frump in the original Broadway production of “How to Succeed in Business Without Really Trying.”
But he was proudest of “The Belle of Amherst,” a one-woman play starring Julie Harris based on the life of Emily Dickinson, which he directed on Broadway at the Longacre Theater in 1976, said Timothy Helgeson, who collaborated with him on the show. Two decades later, Mr. Reilly directed Ms. Harris and Charles Durning in a revival of “The Gin Game” at the Lyceum Theater. He was nominated for a Tony for best director in 1997, and Ms. Harris was nominated for best actress.
His final work was an autobiographical one-man show, “Save It for the Stage: The Life of Reilly,” in which he recounted his difficult childhood. Born in the Bronx, the only child of a Swedish mother and an Irish father, Mr. Reilly told of the pain of being considered the oddest member of a decidedly odd family.
He explained the title of his show by saying that, when he was a child, his mother would often cut him off from speaking by admonishing him to “save it for the stage.” His father, he told audiences, never got over having passed up a chance to move to Hollywood and work with a budding animation artist named Walt Disney.
In the 1970s and 1980s, Mr. Reilly, with his ascots, oversize spectacles and over-the-top penchant for double-entendres, was a regular on television. He appeared more than 95 times on the “Tonight” show with Johnny Carson and was a panelist on game shows like “Match Game” and “Hollywood Squares.”
In a 2001 interview with The Advocate, the national gay magazine, Mr. Reilly reflected on the effect those shows had on his professional prospects. “You can’t do anything else once you do game shows,” he said. “You have no career.”
Mr. Reilly’s openly gay persona was many years ahead of its time on television, and it had its risks. He recalled being dismissed early in his career by a network executive, who told him that “they don’t let queers on television.” Paul Linke, who directed the one-man show, said Mr. Reilly later had the last laugh when he would page through TV Guide and count how many times he was on the air that week.
"If I knew where good songs came from I'd go there more often." Leonard Cohen
"I’ve always held the song in high regard because songs have got me through so many sinks of dishes..." Leonard Cohen

Moderator
Subscriber
I'm so devastated by the news of closure of BBC film forums 29th June 2007.
Last six years I'm having great time talking to lovely members in there and it's a huge loss.

Kewpie said:
I'm so devastated by the news of closure of BBC film forums 29th June 2007.
Last six years I'm having great time talking to lovely members in there and it's a huge loss.
Click to expand...

aww why they closing? you will have to direct your forum friends to the film thread here on solo OT lol!!
what difference does it make?

Moderator
Subscriber
Staff shortages in BBC is the reason for the closure.

Unfortunately I haven't mentioned about Morrissey/Smiths in there, those people have no idea.


I'm totally devastated by the sad news.
He's one of the leading directors of Taiwanese cinema and I was lucky enough to meet him when he gave a lecuture at ICA in 2003.

Its been a long time now but i still mourn the loss of River Phoenix.
.....in a snow filled sky, we'll make it all right to come undone.

I saw "Wild Strawberries" when I was 12 on TV, since then I've watched many of his work it is still my favourite.

"The Seventh Seal" is re-released in UK at the moment.

He was 89 and one of the most important filmmakers in the history of cinema.
RIP.

He's been ill for a long time and last year's restored version of re-relase of The Passanger was very welcome to the cinephiles.