"Last Sunday, while much of the British media were lauding Stormzy’s Glastonbury headline show as epoch defining, Morrissey posted a white supremacist video on his website, accompanied by the comment ‘Nothing But Blue Skies for Stormzy...The Gallows for Morrissey’. The nine minute clip lifted footage from the grime star’s Pyramid Stage performance while arguing that the British establishment are using him to promote multiculturalism at the expense of white culture.

The YouTube channel of the video’s author contains other clips expressing , among other things, homophobia, racism and misogyny - left wing women of colour are a favourite target for his ire. There are also clips expounding the Great Replacement Theory, a far right conspiracy trope which holds that there is a plot of obliterate the white populations of Europe and North America through mass immigration and cultural warfare.

My first thought was to wonder what kind of websites Morrissey must be trawling in order to be able to find and repost this clip on the same day that it appeared online? I came home from Glastonbury expecting to see some angry responses to his endorsement of white supremacism. Instead, the NME published an interview with Brandon Flowers in which the Killers lead singer proclaimed that Morrissey was still “a king”, despite being in what Flowers recognised was “hot water” over his bigoted comments.

As the week progressed, I kept waiting for some reaction to the white supremacist video, yet none was forthcoming. Every time I googled Morrissey, up would pop another article from a music website echoing the NME’s original headline: ‘The Killers Brandon Flowers on Morrissey: ‘He’s Still A King’. I’m well aware from personal experience how easy it is for an artist to find something you’ve said in the context of a longer discourse turned into an inflammatory headline that doesn’t reflect your genuine views on the subject at hand, but I have to wonder if Flowers really understands the ramifications of Morrissey’s expressions of support for the far right For Britain Party?

As the writer of the powerful Killers song ‘Land of the Free’, does he know that For Britain wants to build the kind of barriers to immigration that Flowers condemns in that lyric?
Party leader Anne Marie Walters maintains ties with Generation Identity, the group who both inspired and received funds from the gunman who murdered 50 worshippers at a Christchurch mosque. How does that sit with the condemnation of mass murder by lone gunman in ‘Land of the Free’?

As an explicitly anti-Muslim party, For Britain opposes the religious slaughter of animals without the use of a stun gun, a policy that has given Morrissey a fig leaf of respectability, allowing him to claim he supports them on animal welfare grounds. Yet if that is his primary concern, why does he not support the UK’s Animal Welfare Party, which stood candidates in the recent European elections?

Among their policies, the AWF also aim to prohibit non-stun slaughter. If his only interest was to end this practice, he could have achieved this without the taint of Islamophobia by endorsing them. They are a tiny party, but Morrissey’s vocal support would have given the animal rights movement a huge boost of publicity ahead of the polls.

Instead, he expresses support for anti-Muslim provocateurs, posts white supremacist videos and, when challenged, clutches his pearls and cries “Infamy, infamy, they’ve all got it in for me”. His recent claim that “as a so-called entertainer, I have no rights” is a ridiculous position made all the more troubling by the fact that it is a common trope among right-wing reactionaries.

The notion that certain individuals are not allowed to say certain things is spurious, not least because it is most often invoked after they’ve made their offensive comments. Look closely at their claims and you’ll find that what they are actually complaining about is the fact that they have been challenged.

The concept of freedom pushed by the new generation of free speech warriors maintains that the individual has the right to say whatever they want, whenever they want, to whoever they want, with no comeback. If that is the definition of freedom, then one need look no further than Donald Trump’s Twitter feed as our generation’s beacon of liberty. Perhaps Lady Liberty should be replaced in New York Harbour with a colossal sculpture of the Donald, wearing a toga, holding a gaslight.

Worryingly, Morrissey’s reaction to being challenged over his support of For Britain, his willingness to double down rather than apologise for any offence caused, suggests a commitment to a bigotry that tarnishes his persona as the champion of the outsider. Where once he offered solace to the victims of a cruel and unjust world, he now seems to have joined the bullies waiting outside the school gates.

As an activist, I’m appalled by this transformation, but as a Smiths fan, I’m heartbroken.

It was Johnny Marr’s amazing guitar that drew me to the band, but I grasped that Morrissey was an exceptional lyricist when I heard ‘Reel Around the Fountain’. Ironically, it was a line that he had stolen that won my affections. “I dreamt about you last night and I fell out of bed twice” is spoken by Jimmy, the black sailor, to his white teenage lover, Jo, in Sheila Delaney’s play ‘A Taste of Honey’.

The 1961 movie, starring Rita Tushingham was an early example of a post-war British society that would embrace multi-racial relationships (and homosexuality too). By pilfering that particular line for the song, Morrissey was placing the Smiths in the great tradition of northern working class culture that may have been in the gutter, but was looking at the stars. Yet, by posting a white supremacist video in which he is quoted as saying “Everyone prefers their own race”, Morrissey undermines that line, erasing Jo and Jimmy and all those misfit lovers to whom the Smiths once gave so much encouragement.

A week has passed since the video appeared on Morrissey’s website and nothing has been written in the media to challenge his position. Today it was reported that research by the Institute for Strategic Dialogue, a UK based anti-extremist organisation, reveals that the Great Replacement Theory is being promoted so effectively by the far right that it is entering mainstream political discourse.

That Morrissey is helping to spread this idea - which inspired the Christchurch mosque murderer - is beyond doubt. Those who claim that this has no relevance to his stature as an artist should ask themselves if, by demanding that we separate the singer from the song, they too are helping to propagate this racist creed." 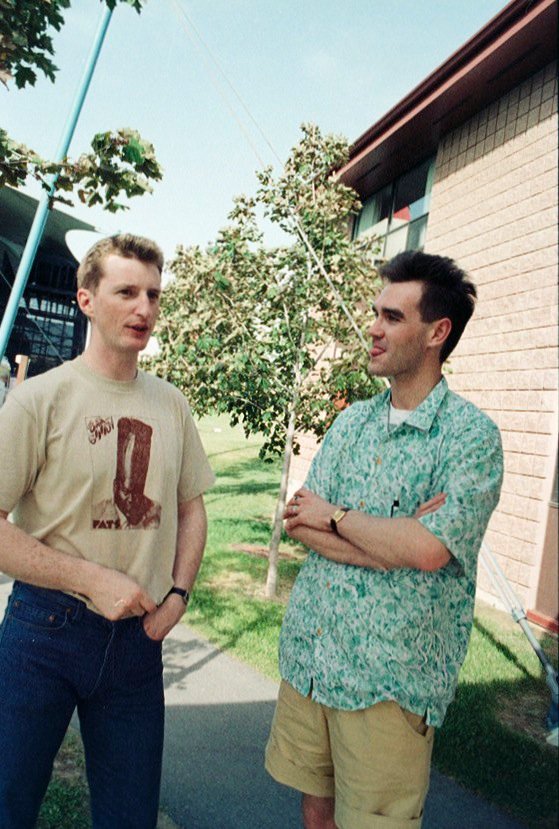 Are you going to tell any of the four Smiths are still friends with Bragg as of today. I don't think so.

I really like that Billy ended his excellent article with a really sarcastic “Regards, FWD”.

Was Billy drunk when he wrote this?
A

Morrissey is standing up for what is right and denying Islam. Bragg has bought into the established brain washing. Again!! Why would a gay man want to welcome Islam into his country when they say he should die?? Bragg is splitting hairs over if Morrissey is racist, meanwhile he’s backing a religion that says to kill gays! I’m a liberal but I just don’t get this part of the left that wants to defend Islam and it’s anti gay and anti woman ways. You’re no liberal if you do!
D

jo and jimmy watchin and havin a great time...
F

Those horrible middle class leftists are traitors to themselves. Imagine going back to the 80s and telling them that they would be supporting an agenda to limit what speech and information is allowed and accepted? And that is what is happening and being proposed. Or is “time to drop your Morrissey-loving friends” not a totalitarian dog-whistle? I guess with the internet where everything is available, they had to re-examine their liberal free-thinking ways. 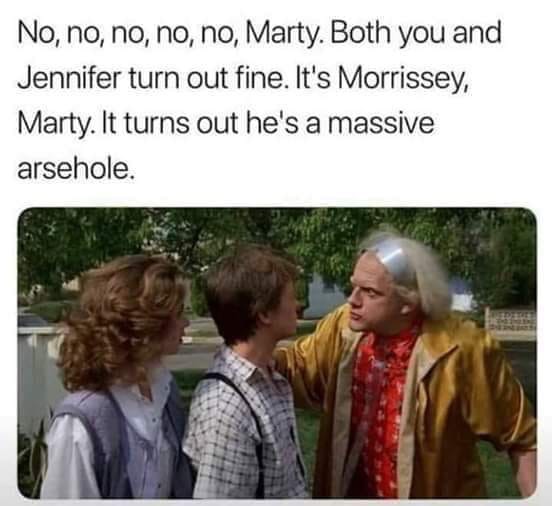 It's just a longer version of an @Uncleskinny post without the cursing. 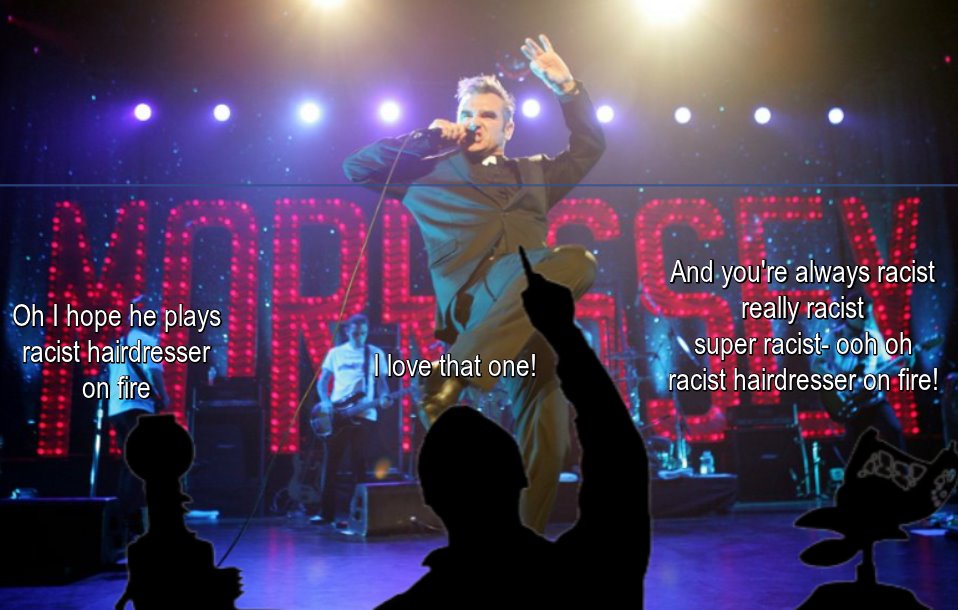 Subscriber
He's 100% spot-on on all points. Though the racist bastards on here will disagree.

I hope he does Seasick, Yet Still Racist.

Uncleskinny said:
He's 100% spot-on on all points. Though the racist bastards on here will disagree.
Click to expand...

He, like you, is a leftist stooge, that hates England.
T

I see the possibility of nothing untoward done (does BB really think Guardian et all would miss a Moz dig?) is beyond Bragg ...

Trill said:
I hope he does Seasick, Yet Still Racist.
Click to expand...

Or maybe Boy Racist, Last Night I dreamt of a Lily-White England, I like you (but not you, or you) or any of his other wonderful tarnished classics!

Trill said:
I hope he does Seasick, Yet Still Racist.
Click to expand...

I Will See You in Far-off Racists
H

Multiculturalism is a great idea for others eh Billy? Lock the gate to your leafy mansion now and relax. This is his audition for a Guardian opinion column and Hope Not Hate patronage.
A

Well done, Billy. At last someone, somewhere has the balls to call out Morrissey regarding his active involvement and support of hate incitement. The involvement isn't direct, as Billy made clear, but Morrissey's endorsement of alt-right views/organisation/political parties is having an impact; an negative impact. Just look at the level of racist, homophobic entryism into this forum?

The racists and dog whistlers in here will immediately rubbish what Billy has to say; none will write as eloquently or with as much passion.

Only yesterday both Reelfountain and Hoffman made homophobic comments, comments that later one of them attempted to described as humorous. They were not humorous but attacks on LGBT people, who apparently, have no right to shove their sexuality in society's face and who should return to the shadows. If you've ever experienced direct homophobia I can assure you it's no joking matter. In tandem with their abject racism these racist entryists have changed the very nature of this forum. They flood threads with racist or dog whistling statements with indecent haste changing the very nature of every thread.

Morrissey's endorsement of alt-right views/organisation/political parties has emboldened these racists to believe they have a home in this forum. Do they?
You must log in or register to reply here.

The Guardian report and respond...