Segment at end of show on Morrissey/Smiths fans in Los Angeles includes interviews and clips of a MorrisseyOKE karaoke night in Boyle Heights.

Around halfway through the shoot, somebody called me and asked if I knew about “the Morrissey thing.” They said, “Morrissey is HUGE with Chicanos! Check it out.”

This seemed, frankly, an incongruous if not an outright unbelievable assertion.

If true, what was it about Morrissey—an English son of Irish immigrants, famous for his songs about doomed love, bad sex, homoeroticism, vulnerability, and alienation—that resonated so powerfully with Mexican-Americans?

So I started asking everybody I spoke with as we filmed—from Ultimate Fighting stars Nate and Nick Diaz and Gilbert Melendez—to action hero Danny Trejo. (None of them had much idea who Morrissey was—or gave a ****). But just about everybody else smiled when I asked the question. Often a shy, knowing smile was followed by the kind of answer that makes an interviewer hold his breath, hoping the answer goes on and on.

In the end, I think, this question cracked the code. You’ll have to watch to see what the hell I’m talking about.

During a segment with actor Danny Trejo, "Parts Unknown" host Anthony Bourdain brought up Morrissey's popularity in the Hispanic culture.

Bourdain: "Are you a Morrissey fan by any chance?"

Bourdain: "Like from his band The Smiths- it's like a British rock band of the late '80's- that is apparently hugely popular with the Chicano community. So, you have not been touched by this?"

Unfortunately, Trejo is no Moz fan, answering "I'm an oldies guy, you know what I mean?"

Not the answer we may have hoped for as fellow Morrissey fans, but still a nice mention on CNN tonight. 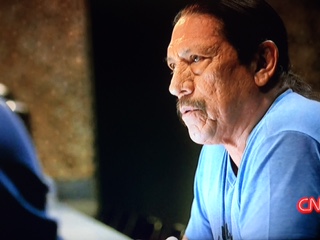 Thanks for proving the stereotype correct...what, no clever Smiths or Morrissey song title this time?

Landon said:
Thanks for proving the stereotype correct...what, no clever Smiths or Morrissey song title this time?
Click to expand...

What she said.
"I love you Moz!" So when did you last see your psychiatrist, hmm?
"Yesterday. She said it was okay. She loves you too oo."
H

Trejo is a legend in Sweden for his taco commercials and that's about it.
You must log in or register to reply here.

A
Does the Mexican-American Community Still Love Morrissey, Despite Everything? - Pitchfork
5 6 7

Do Latinx Fans Still Love Morrissey (And Will They Show Up At Hollywood Bowl This Weekend)? - LAist
2 3 4