From the forum thread Morrissey's shirt ???: 
I think Moz should be boycotting this designer:
I, Maximus! - GQ Magazine


Made in Italy but a product of London, Angelo Galasso is the designer whose on-the-money interpretations of classic tailoring have become wardrobe staples for playboys and plutocrats. Among the ostrich hide, crocodile skin and super-luxury of his flagship store, GQ talks shop with a man who has come to reinvent menswear.

The Financial Times may have once described him as "this generation's most inventive image maker", but if your idea of style is ultra-minimal, then Angelo Galasso is probably not your man. Nor will PETA members be his biggest fans, but the Italian king of extravagance is perfectly happy with that. He makes no bones about being very much the Maximus of the fashion arena.

From his London flagship store next door to Harrods, Galasso supplies the international crowd, from Macau to Moscow and Manchester, who call London home and aren't fazed by paying up to £5,000 for a pair of jeans, as long as some mink or crocodile is involved in the process. And there are plenty of men who want exactly that.​
Why Moz, why?​
Images posted by CougarFrog: 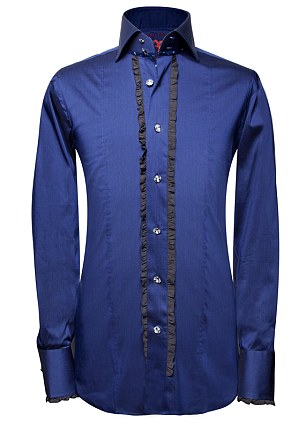 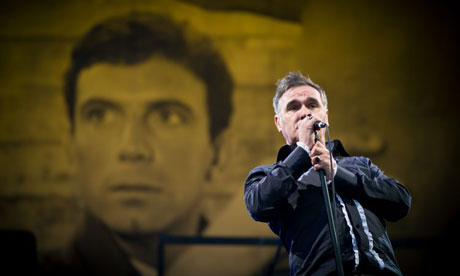 Morrissey won't listen to Bryan Ferry/Roxy Music but he will wear Angelo Galasso...
A

Who is a hypocrite? Your father?

I get really mad when I hear about people wearing crocodile skin or anything like that. So I'm quite dissapointed that Moz wears something like that. Even if it's vegan I still am. I mean, I just don't like persons who buy clothes that are 5.000 $ when you can buy something similair for 30 $. Oh well, it's his own choice after all. I still respect him as the person he is.

Stop to think for a second. I can guarantee the majority of you (I'm not saying everybody) will not know the history of the clothing outlet where you bought your clothes from, or the means in which they were made. The same goes for Moz. He's a vegetarian, not an OCD riddled layabout with enough time on his hands to trawl through the web (if he's to be believed he doesn't even own a computer) to see what injustices to animals his favourite designer labels have committed. The shirt he is wearing wasn't made from an animal was it? No. That's all you need to know. Stop pouting and throwing your toys out of the pram over every little thing Morrissey does. This is more Morrisseyunderthemicroscope.com than a tribute site, even the admin posting do so with a hint of cynicism and spite... Is it any wonder f*** morrisseysolo-gate had to happen?

This website is The Daily Star/The Sun of Morrissey websites and you all know it.
Anyway gossip away

Subscriber
I just bought an original "Sak" bag because it has no leather parts on it what-so-ever, but I know that they do make leather bags. I also have three pair of shoes that are man made; however, each of those companies have a line of shoes made of various animal skins, sadly. I chose to buy the non-leather products, tho, because I am a vegetarian...there is only so much you can do. I see the point everyone is trying to make. I suppose it does look a little odd for him to sing MIM with that video playing right behind him while sporting a shirt made by a designer who isn't concerned about the welfare of animals. Maybe, like someone else pointed out, he's just not aware of the designers full line of clothing or their history. We all know the Passion Morrissey has for animals, so I'm inclined to believe he's unaware at this point. Also, those boots are quite like the boots the Beatles used to wear. I don't think yhey look bad at all. As for Kristeen Young's leather dress - any chance it was pleather?
When you were hopelessly poor, I just liked you more...
A

Anonymous said:
The same goes for Moz. He's a vegetarian, not an OCD riddled layabout with enough time on his hands to trawl through the web (if he's to be believed he doesn't even own a computer) to see what injustices to animals his favourite designer labels have committed.
Click to expand...

He isn't? Well you learn something new every day.

Wrong. He has OCD with a few internet-related things, and I can assure you he spends an inordinate (yes Russell, I know what that word means) amount of time surfing, considering his extra-busy schedule.
He could have used his time more wisely and do his homework instead, we wouldn't have held it against him. We quite like serious people. I know it's tempting to just surf for fun and check what your favourite f***er(s) are up to, but I thought looking after his own image was more important.

Surely he's not that obsessed he's forgotten himself? :-?
J

Due to many years of technophobia , i'm new to all this . Can someone tell me what the hell "troll' means ?
A

Let's be honest - even a fancy shirt can't hide the fact that Moz is looking well rough these days. Old, fat, bloated and past it. Those 3 new songs are dire. It is time to get off the stage.

Is this site called " morrisseyloversunited " ?

" What difference does it make" , wich clothes and shoes he wear

Please David you must stop with the " Anonymous " people postings.

Or quite with the site.

I thought this site was for Morrissey fans.

It is not Stalinist Russia my friend. One can still enjoy Moz and his music but keep their critical faculties. “You can take the boy out of Stretford but you can’t take….” For years now, Morrissey, having escaped the misery and mind numbing wretchedness of a working class life in Britain, through his god given talent has succumbed to that most insidious ‘working class made good’ trait: He has become an emblem of the nouveau riche – from his suites at the Dorchester, to his designer denim, antique collecting and now these vile shirts. The idea that he didn’t know about this designer and his love of the exotic dead is wishful thinking at best. After all Morrissey could have bespoke shirts made in a similar style. The fact is that Morrissey wanted to have DESIGNER shirts – “Look at me I can afford these, aren’t I successful?” And in that regard he is no different from the legions of Manchester proles in their Stone Island anoraks. Morrissey simply has a lot more money – and perhaps even more questionable taste. As an artist he has nothing to say, his latest efforts being ‘Morrissey by numbers’, lyrically moribund and musically crass. Seeing him at Glastonbury was very, very sad indeed, as he sweated through a lackluster set for a paycheck. Even his band are beginning to express a “WTF am I doing here” look. I will stick with his recordings from now on, sad though that is. I prefer to remember the man who gave us “The Queen is Dead” and “Southpaw Grammar” not this slow death.
J

Regardless of the hypocrisy that surrounds his shirt and the circus mention at Glastonbury and a (truly awful) version of Meat is Murder at the same concert, the fact is that Morrissey no longer has the hunger needed to be a truly creative artist.

It's a shame because his voice is on great form at the moment. If only the new material and his band were up to the same standard. Perhaps Alain could relight the spark under Morrissey because Boz Boorer is now living up to his name.

I truly want Morrissey to succeed and continue but not as an ageing pop "star" with nothing to sing about. He needs to prove he can be relevant again.

Start off with sacking his entire band and going in a new musical direction. The last album that took any risks was Southpaw Grammar. I'm sick of the production of every Morrissey album since with their crunchy guitars and loud drums and not a hint of dynamics in the mix as the sound is compressed and slammed.

That's why you can put Viva Hate on and it still sounds like a fresh album after more than 20 years. It took some melodic and sonic risks.

Plus, I never want to see Morrissey in irrelevant $5000 jeans.

In the days when he was hopelessly poor, I just liked him more.
A

arse of the world

You silly old man
In your misguided trousers
and your frilly shirt designed by a fur lover
and your leather boots.

and you have the cheek to sing meat is murder... hypocritical tosspot
A

You silly old man
In your misguided trousers
and your frilly shirt designed by a fur lover
and your leather boots.

and you have the cheek to sing meat is murder... hypocritical tosspot
Click to expand...

And he dresses his band up in f**k fur t-shirts whilst preening in his AG shirt. Anyway, I am off to buy myself a Mulberry handbag, I want one, they are pretty, so therefore why shouldn't I have one. Beggar the principles. It's a girl thing, to want a really nice bag.
A

Hmm... He probably got the shirts for free because his passion for certain movies matches the branding? In any case I can see now why Morrissey wore the shirts. I guess you cannot have it all and it is difficult to find a brand that matches you in all aspects. Sex always comes first in the whole Morrissey branding.
A

Paul McCartney is also a customer?
You must log in or register to reply here.