Nice review and is very thorough 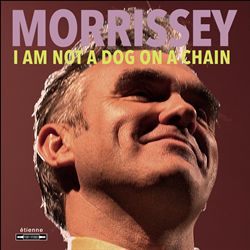 I Am Not a Dog on a Chain - Morrissey | Songs, Reviews, Credits | AllMusic

Find album reviews, stream songs, credits and award information for I Am Not a Dog on a Chain - Morrissey on AllMusic - 2020 - "I do not read newspapers, they are…

“Ido not read newspapers, they are troublemakers," sings Morrissey on the title track of I Am Not a Dog on a Chain, echoing the sentiment he laid bare on "Spent the Day in Bed," the first single pulled from 2017's Low in High School, which was his last album of original material prior to this 2020 set. Morrissey is working once again with Joe Chiccarelli -- the pair struck up a collaboration back in 2014 with World Peace Is None of Your Business -- and picking up the threads they left hanging on Low in High School, pushing the sounds and ideas that hovered in the margins into the center. The shift is apparent when "Jim Jim Falls" kicks off the album with a frenetic electronic squawk, the funkiest -- and synthiest -- sound to be heard on a Morrissey album in many years, if not ever. The rest of I Am Not a Dog on a Chain follows suit, with Morrissey pushing his rhythms hard and embracing a bevy of adventurous, steely, and ornate textures, not to mention extending an invitation to Thelma Houston -- the disco queen known for "Don't Leave Me This Way" -- to wail on "Bobby, Don't You Think They Know." Occasionally, he slides into familiar territory -- "What Kind of People Live in These Houses" revives a Smiths-ian jangle -- but these tracks almost feel like mile markers left to illustrate how far the rest of the album wanders. This aural rush is so bracing, it nearly disguises how I Am Not a Dog on a Chain showcases a Morrissey who seems comfortable in his role as a cantankerous curmudgeon taking jabs at former allies. Set aside this inclination toward sneering solipsism, which not only characterizes but enlivens nearly every song, and I Am Not a Dog on a Chain is one of the better latter-day Morrissey records: the sense of musical daring reveals how placid and complacent he's been for the better part of a decade.
A

"...placid and complacent he's been for the better part of a decade". I don't bleeding think so!!!
T

Well I agree but I think the comment was a bit exaggerated tongue in cheek in its comparison. This album does make me think refusal and some of low in high school do sound more basic in there approach. Like he’s being more of a professional there. Especially the vocals. He sounds more alive on this than he has in a while imo. He sounds loose and fired up here in a way maybe I didn’t realize he hadn’t in a while. I also probably still on new album high so take all this with a chuckle. I was just happy the review wanted to talk about the songs
You must log in or register to reply here.