Alain Whyte's Black duo Jet Gretsch Guitar in good condition. Was used in many Morrissey demo's and songs and was used live In many Red Lightning shows. It's a solid great guitar in the vein of a Les Paul but has the sound of the vintage Gretsch, may the best bidder win. Sold by Alain Whyte. I am happy to sign the guitar for the winning bidder if that is what you would like. 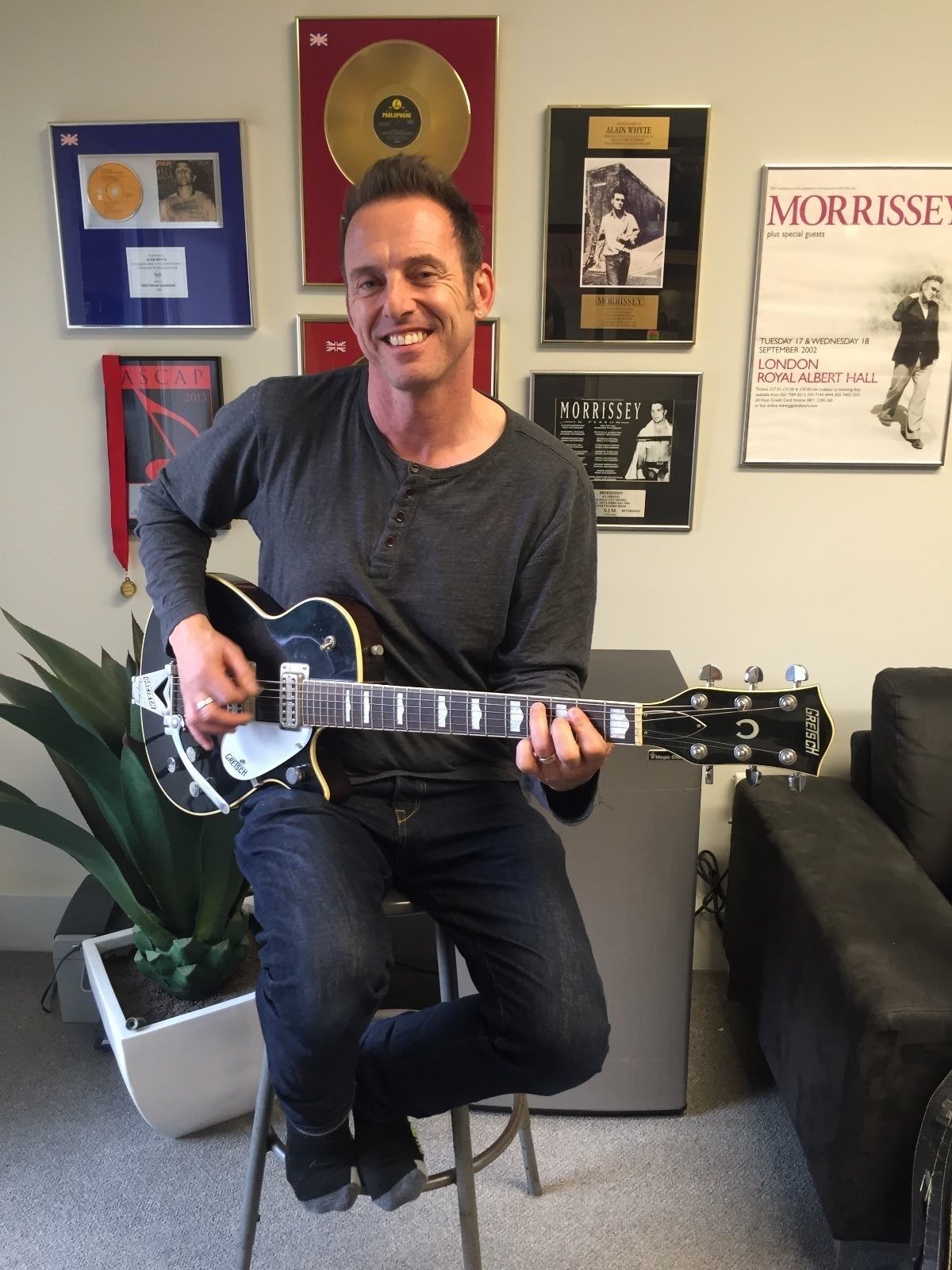 Nice collection of Gold Records on the wall there too! Glad Alain is still obviously proud about his achievements, and hasn't binned them.
A

i dont know this kinda makes me a little sad.
A

Dear Alain - Moz has gone off the rails, and needs A) help, and B) some great songs - please come back!

Moderator
Boz collects Gretsch guitars....
Yes, it feels a bit sad.
He is a wonderful guy - wrote me a wonderful letter for just buying the post-Moz single.
I hope it goes to a good home.
Regards,
FWD
(don't worry, Sam will photoshop Moz back on the rails - even if a bit out of proportion).
Stealing things from the Internet - so you don't have to.

Anonymous said:
i dont know this kinda makes me a little sad.
Click to expand...

Why does Alain Whyte selling a guitar make you sad? I'm just curious to hear why.
"It's not your bidet anymore."
S

This is just getting goddamned depressing.

I wonder if this is the axe he used in Live In Dallas. I am no expert, admittedly, about that stuff but it looks like the same one to me.

Man, I wish Alain was still around in the Morrissey camp. Alain, if you are reading this, you are so very sorely missed. That guitar was instrumental (no pun intended) in creating so many great, great memories in Morrissey's career. I am sorry you feel the need to part with it, but best of luck on the sale.

Skylarker said:
This is just getting goddamned depressing.

I wonder if this is the axe he used in Live In Dallas. I am no expert, admittedly, about that stuff but it looks like the same one to me.

Man, I wish Alain was still around in the Morrissey camp. Alain, if you are reading this, you are so very sorely missed. That guitar was instrumental (no pun intended) in creating so many great, great memories in Morrissey's career. I am sorry you feel the need to part with it, but best of luck on the sale.

It is the guitar used in Live In Dallas.

Alain, thank you for writing most of Morrissey's greatest solo music. Yes, others have a few hits here and there, but you were by far the most consistent talent Mozzer has had as a solo artist. You are missed and hope your are well. Good luck with the auction.

Good luck with the ebay selling, I'm jealous of who will buy it.

as many said , I wish you still were in camp Morrissey.

Wish you all the best Alain .
[SIGPIC][/SIGPIC]

We're really missing you...
Wish you all the best, always, Alain.

i highly doubt he's skint. Could it just be possible that he has no further use for it and wants to offer to fans? maybe some proceeds will even go to charity

NealCassidy said:
Is Alan skint now then?
Click to expand...

It is an interesting question. I can't find a mention as to whether the proceeds of the sale will be donated to charity or for some other purpose.

I am not a musician so I am not sure of the connection between a guitar player and the instruments they play, but certainly in this case given the history that surrounds this particular guitar and the wonderful songs that were written and played on it that there might be some sentimentality in keeping it. If nothing else, then as a reminder of a time when he musically kicked a**! It's up to $1,850 USD by the way.

And to echo all the others here, I hope Moz can clear his head enough to extend an invitation to Alain to return to his music writing duties. Anybody who can write a song like IBEH should not have been summarily discarded.

PS. From the photo, he might need the funds to purchase shoes
A

The 90s Gretsch guitars were not very well made. It took a lot to make them playable. I know because I own one. From a musician standpoint, he probably doesn't have room for a guitar that is not crafted as well as his other guitars. I wouldn't read anything into him selling it other than that.

DavidK said:
Are you sure? The one in the Live in Dallas video has no control knob under the pickguard, this one does.
Click to expand...

I'm fairly certain that the guitar from Live In Dallas was his black Les Paul, which was THE primary guitar he used in his Morrissey years, at least from 1991-2002. It's notable for the on/off toggle shaped like a die - you can clearly see it when they were on Craig Kilborn in 2002, for instance - and less clearly in the pictures from the Beethoven Was Deaf CD booklet. He had at least one more black Les Paul used in that era - virtually identical - which he shared a picture of on Facebook years ago. He also used a gold Les Paul frequently and has been seen using that in the rare live appearance since 2004 (e.g., a TV appearance with Anya Marina). He seemed to favor Telecasters for YATQ/ROTT/Red Lightning (as seen in Who Put The M...), some speculating because they were lighter and caused his back less grief - anyone who plays guitar knows that Les Pauls weigh a ton. I believe he auctioned off a white Telecaster 2011-ish and the proceeds went to an animal charity of some kind (I could be mistaken). A few years ago he also auctioned off a Danelectro that he used as a warm-up/practice axe before Morrissey shows. For authenticity's sake, he posted a picture of a Maladjusted-era Morrissey holding it.

A musician was attempting to get an interview show with LA musicians off the ground a few years ago and there are a handful of clips on YouTube showing Alain in his home studio showing off various guitars. He had a quite a few, one of which was probably the electric sitar heard on various ROTT tracks. I recall another was the guitar he used to play "Meat Is Murder" live. I suspect with two kids now it's probably a case of him consolidating what he doesn't need or use regularly. It sure appears Alain is living quite well and very happily. Fatherhood seems to suit him.

Anonymous said:
i dont know this kinda makes me a little sad.
Click to expand...

Well, he could've worn a shoe for a public shot, couldn't he ?

On the topic of being skint: totally doesn't mean at all. If you're a musician, especially at the level of Whyte, you have several guitars, then, if you don't need it anymore, you just sell it and maybe buy another one. It's a collector thing within musicians, buying and selling off gear.
A

Yeah, if he doesn't use it much, then better it go to a good home where it's going to be played, than gather dust.

He's selling a shit made guitar because he needs the money. Big deal.

He can never get rid of Jesse, because then he would lose the sellouts in the California Mexican Goldmine. Anonymous-

Morrissey's material - and, I would also say, his live shows - just haven't been the same since Alain stopped working with him.

I'm not sure why they stopped working together but I hope he rejoins one day.