Bathing in his Sunset Marquis villa. "Morrissey was signing albums at the Virgin store on Sunset when things got out of hand, as a mob clamored to get to Moz and his security team whisked him back to the Sunset Marquis in a car. The mob chased after the car, and within minutes, the Marquis was overrun, people tearing up and down halls, knocking on doors, trying to find Morrissey’s room. Hotel security was forced to call the West Hollywood sheriff to help secure the property and remove the hundreds of kids who'd infiltrated the Marquis." 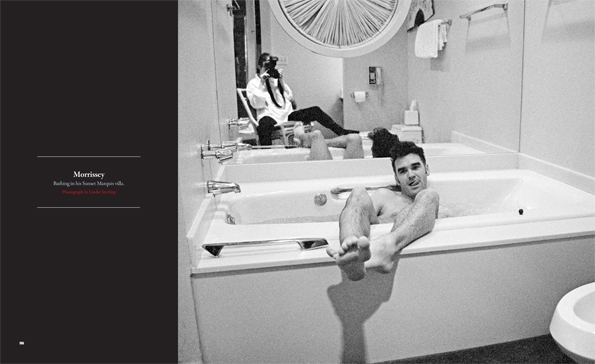 I love the shot of Linders spread legs, bet she's got a lovely Bermuda triangle.

Small bathroom for such an expensive hotel room! Kinda sad that fans have to stalk so much. I haven't read Autobiography yet, but I hope that Moz related similar anecdotes about stalking fans.

I bet mrs Mulvey got some hotter negatives than this one from her book
'Morrissey shot'...

'and they say he's mentall'...special aka as Linder Sterling pounds
[SIGPIC][/SIGPIC]

"To Morrissey, With Love" art items listed for sale

Far Out: A look back at Morrissey’s mammoth interview of the legendary Joni Mitchell, from 1997