Bigmouth Strikes Again
Panic
Vicar In A Tutu
Frankly, Mr. Shankly
There Is A Light That Never Goes Out
Ask
I Want The One I Can't Have
Never Had No One Ever
Cemetry Gates
The Boy With The Thorn In His Side
Is It Really So Strange?
Shakespeare's Sister
Stretch Out And Wait
That Joke Isn't Funny Anymore
The Queen Is Dead
/I Know It's Over
//(Marie's The Name) His Latest Flame/Rusholme Ruffians
//Hand In Glove

The setlist was very similar to the previous one in Glasgow. The only changes were "Stretch Out And Wait" replacing "What She Said" and live staple "Hand In Glove" returning to take the place of "William It Was Really Nothing" as the final song.

This gig was a violent one, but rather than the usual security-versus-fans scenario, it was the non-fans versus the Smiths. A few troublemakers in the audience urinated in pint glasses and hurled them at Morrissey. Beer was also thrown on stage. The band was spat upon quite a lot, prompting Morrissey to say as he returned for the second encore, "Thank you for all your phlegm... we didn't really want it...". One verse into "Hand In Glove", Morrissey was hit in the eye and left the stage. The band finished the song by themselves then Johnny stuck his fingers up to the audience, shouted "And if the people spit, then the people spit" (a variation on a line from the song just performed) and followed Morrissey offstage. Mike then started beating his bass drum and this made the troublemakers in the crowd cheer because they thought that it was the start of another song.

Earlier in the set, there had been already enough heckling and interference from the crowd to stop Morrissey from singing some of his lines in "Vicar In A Tutu" and "Frankly Mr Shankly". The unreleased songs "Ask" and "Is It Really So Strange?" were both introduced as "new". In the latter's case, Morrissey actually went further: "This is a new song, which you will hate... (crowd cheers) It's called 'Is It Really So Strange?'..." After its performance Morrissey returned to the subject and asked "Did you like it? (crowd: yes!) How do you know?". Then to some heckler in the crowd he just shouted "What?!" In "Never Had No One Ever", he sang the slightly alternate "I'd hate to be rude" instead of "I'd hate to intrude".

info from passions just like mine
Last edited: Dec 24, 2006
i shot and uploaded this show http://forums.morrissey-solo.com/showthread.php?t=76602&highlight=las+vegas+drifter

Many, many thanks. I posted yesterday and this was one of the ones I was wanting!!
I remember the concert well and you are spot on with the write up, were you there???

..Having problems with this, getting this error message....Unfortunately, the link you have clicked is not available,

Any help would be appreciated

naw, i lost my mozz virginity on this show, june 7th 91
View attachment 1343
this show was for you, merry christmas
i shot and uploaded this show http://forums.morrissey-solo.com/showthread.php?t=76602&highlight=las+vegas+drifter

its fixed now
i shot and uploaded this show http://forums.morrissey-solo.com/showthread.php?t=76602&highlight=las+vegas+drifter 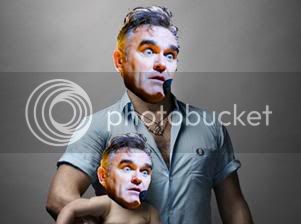 drifter, what can I say?
U

I thought after all this time I should clear up some of the mythology and frankly the lies about this concert.

It was the only time I saw the Smiths. My wife, who I was going out with at the time went separately with some friends from Newcastle (the Barleymow crowd). I went in a transit van with some people she knew in Alnwick Northumberland. It was a raucous journey based on Merrydown cider, Special Brew and lots of punk music. In the back of the transit it almost seemed glamorous.

We had no tickets so when we arrived I was chucked to the front, because of my Scottish accent, and explained painfully how we had travelled all the way from Edinburgh (lie) and would do anything to get in. Bouncers settled on £2 each and we were all in, the Smiths were well into their set.

Some of the people I was with were "larger than life" and we moved to near the stage pretty easily. THe atmosphere was hot and sweaty and very very studenty, lots of Mozza clones, but no one gave us any hassle.

There was some spitting at that point from the people I was with, but I hasten to add I did not, always thought spitting nasty. However, in their defence they were all blitzed and mostly from serious punk backgrounds which if anyone at that time remembers meant spitting and worse was obligatory.

There were a couple of drinks chucked at some point but categorically no pee in glasses or anything.

The Smiths gave up pretty easy really that night. It was not a violent night as the people I was with were the "troublemakers" and no one said a word.

My wife (girlfriend at the time) was upstairs and later told me how there seemed to be some disruption, Moz got upset and then walked off and the lights came up ( I never mentioned any of this to her at the time). There had been no hassle to that point at all so the "violent" idea of the concert really is made up.

I am still with the girlfriend/wife 20 years later and the subject came up at the weekend at Gmex when she met some other people who had been there.

NME's review the following week read "phlegm throwing morons" and I think that sums it up pretty much. I can also tell you all were shocked and surprised that it stopped the gig, they really wanted it to be great and were just musically rehabilitating punks at the wrong place and time.

I must be getting old now that I feel the need to clarify history.

.
You must log in or register to reply here.