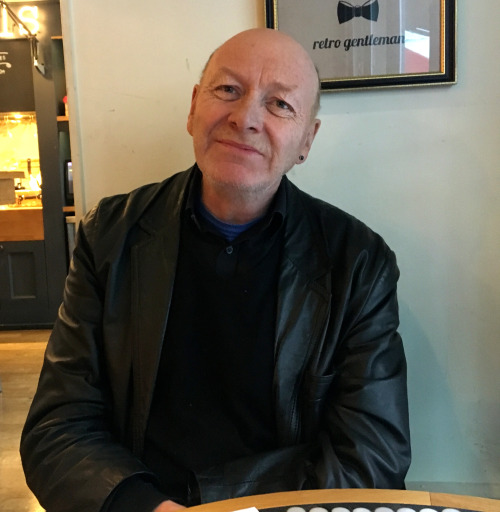 J: Have you read Autobiography?

R: I’ve read Morrissey’s book, yes. I really enjoyed the stories of his upbringing - very evocative. I came out of it very well! Me and Morrissey both did, ha ha! The only bit I read of Johnny’s was in my local bookshop and he had written something inaccurate about somebody else – and it was me! It was the bit about The Smiths tape with Matt Johnson. But it was me!

R: Yes. The last time I saw him was at the Albert Hall for You Are The Quarry with my daughter. We were in a box with Boz Boorer’s family. Linder was there in the next box. We went backstage. Morrissey went up to Rachel, my daughter and said, ‘You’re supposed to be a baby!’ It was Rachel’s first big concert. We got smuggled in. Listed by Mike Hinc. I haven’t seen Johnny for a really long time.
I think it was unfair to take a photo of a very old man sitting on the toilet doing a number two.
Fantastic interview. Some of this give credence to the "lawn-mower" parts quote:

"J: Tell me about the band at that time.

R: Johnny and Morrissey were really driven and had a clear sense of purpose. They knew exactly what they wanted. They shared a vision. It was those two that pushed it forward. The other two were the rhythm section, nice as they were. For Johnny and Morrissey it really wasn’t about work. It was their passion. For the rhythm section it was work. They referred to it as work. I felt that Andy and Mike were slightly overwhelmed when The Smiths took off. It was very fast. They weren’t ready for it in the way that Johnny and Morrissey were. This was like their dream come true. No-one was really ready for it but Morrissey and Johnny had dreamt of it for a really long time.

We didn’t get any arguments from the band. Morrissey and Johnny could be awkward, deliberately so, sometimes. Johnny was overloaded and Morrissey was beautifully whimsical and could change his mind. But everybody was younger. Some of it is really about age.

I wish they had made more videos. I don’t know why they didn’t. The Derek Jarman work fitted a sort of camp sensibility with a slight radical edge, that worked well."

I had that issue of The Catalogue he mentions. I think it was from December 87 or 88. As a kid in the US, I craved all I could read about the band.....so getting that flexidisc was cool. Great pic of Johnny grimacing on stage whilst playing his Rickenbacker too....
Another fascinating interview. I really do love Julie's 15 minutes with you
I look forward to these like you wouldn't believe. Julie's interview style is so warm and natural.
was wondering where Julie had went to.i just thought she ran out of people to interview.
this guy should be writing a book because he seems to remember everything.would love to spend a day looking through the boxes in his cellar,their could be some hidden gems.
Another good one
‘Wake Up Johnny’ must be the rarest of Smiths recordings ! Bessie Smith that is, don't think it exists? I'm sure there must have been discussions of this before, can anyone throw some light on the subject?
An excellent interview. I hope that she can find more people willing to speak.
Buzzcocks have always been my favourite band and i remember (when I was a young lad) going to the New Hormones office on Newton Street in Manchester. For some reason me and my mates assumed that Buzzcocks would be hanging out in there, so we hung around a lot, until one day Richard popped out and explained that it was the record companies office and the band rarely visited there. We were gutted but he seemed a lovely chap.
The rat interviews another nobody for her own self promotion
Why isn't he in the attic looking for that cassette? What could be more important??

Anonymous said:
The rat interviews another nobody for her own self promotion
Click to expand...

Anonymous said:
The rat interviews another nobody for her own self promotion
Click to expand...

Meanwhile you just sit there doing nothing with nobody. You are nobody's nothing.
it's a good interview

Julie makes a good work with this blog. And she's so kind. I spoke to her once and I loved out chat (via e-mail). Love it.
Having met Julie and her sister, I can only say that the dislike of someone with nothing but kind intentions towards the Morrissey community is very odd to say the least.
She's published and arranges nice nights out for people - hardly a reason to cyber-crucify someone.
Hatred and 'anti' behaviour towards someone like this will always reveal more about the detractor than the person concerned.
Regards,
FWD.

Famous when dead said:
Having met Julie and her sister, I can only say that the dislike of someone with nothing but kind intentions towards the Morrissey community is very odd to say the least.
She's published and arranges nice nights out for people - hardly a reason to cyber-crucify someone.
Hatred and 'anti' behaviour towards someone like this will always reveal more about the detractor than the person concerned.
Regards,
FWD.
Click to expand...