Uncleskinny said:
Well - what's on the horizon? No shows, no deal, decimated fan-base - what would you do?
Click to expand...

I love that you're still obsessively hanging around a singer with "no shows, no deal, and a decimated fan base" ... who is more foolish, the fool or the fool that follows?
A

Everything with Tobias on it needs to be at the bottom of the list.
S

World peace is unlistenable. What the hell? Is he joking?
H

Ryan said:
Why does he keep putting Rank so highly?
Click to expand...

Rank has the definitive versions of I Know It's Over, The Queen Is Dead, and London.
M

Skylarker said:
And you know this how, exactly? Did they take a poll?

Also...how and when has he endorsed "far right" politics? Yes he espoused vague support for For Britain but in the same breath saying he doesn't really support any party or trust politicians. So basically all that means is that he supports a revision of England's immigration laws, which is ONE facet of For Britain's platform.

He has said that British culture is largely gone because of the vastly changed mixed heritage populace. That makes him racist? Or is he just stating a fact that people don't want to confront? He said the same thing about America's influence on Btitish culture 25 years ago. Did that mean he was anti American? Doubtful, as he MOVED HERE.

"Everyone prefers their own race." I.E. everyone feels most innately attuned to others that are superficially like them. Wow. Such a hateful comment. No. Clumsily worded (arguably) but actually just a blunt, non biased observation. If you have an IQ over 5, you'd reasonably infer that he meant instinctively prefer at the outset.

"You can't help but think of the Chinese as a subspecies in regard to their treatment of animals." That's a paraphrase but the point is that press midwits usually just quote the part "the Chinese are a subspecies." They divorce it from the context he said it in. And if you think that the way the Chinese treat dogs and cats ISN'T barbaric, savage, and inhumane (i.e. LESS THAN HUMAN WITH REGARD TO THE BEHAVIOR) then you're f***ed.

So again please explain how and when he embraced far right, racist politics. This dude who idolized James Baldwin, Maya Angelou, and the Black Panthers. This dude whose biggest fan base (not to mention half of his band at any given time) are Latino. This dude who spent the 2000s mocking George Bush, the right wing leader of the free world. This dude who sells out shows in Latin American countries. This dude who had Thelma Houston duet with him on his last album. This dude who changed a major verse on a classic song to Spanish lyrics. This dude who saturated his Low In High School album with middle Eastern lyrical and musical motifs. 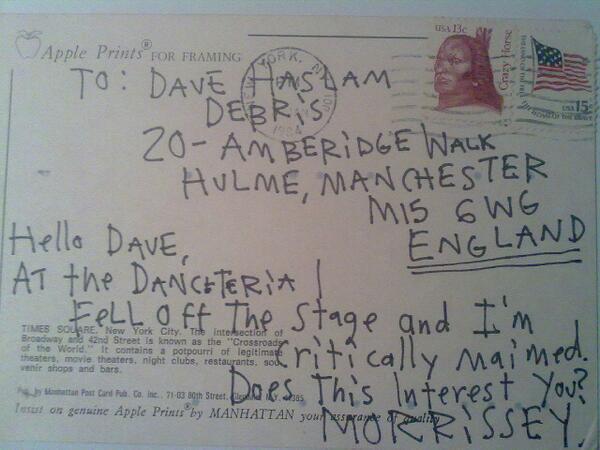 It seems Dave ‘I got a post card from Morrissey ‘ Haslam is advertising a free anti Morrissey gig to coincide with the singers concert in Manchesterford in July . Haslam took to social media and sa…

Maladjusted above Hatful of Hollow, The World Won't Listen and The Smiths??? We demand a recount!

This is like Liam Neeson ranking his movies and putting Taken right near the bottom.

in your opinion
L

This list clearly signals the end of his days.

Morrissey's preferences have always been erratic to say the least, but usually he adheres to the view that the newest is always the best and then the ranking goes backwards in time (like in the 2011 listing quoted earlier in this thread). In this light it is curious that LIHS and Dog are in the mid-table plus that Ringleader is so high. I wonder what has changed his view on that. To me it was a bad case of Moz on autopilot after the thriumph of Quarry, both musically and lyrically. I prefer Years of Refusal to it, even though it's very uneven.
S

This makes no sense at all if you just consider the songs. Maybe it's the artwork or any personal reason we don't know.
http://www.lastfm.de/user/salfordladsclub
L

MOZ became metaphysical!!!!says a decree:..´¨ it is me and i am proud´¨ !!!!
if MOZULYS i am also proud of you and that legacy is of a man with an enviable inspiration and with a super sensitive soul!!!Do not agree wiyh the order of some records ,but thanks!!!!!,for me the number 1 is VAUXHAL AND I ,thst is your masterpiece !!!MOZ GRACIAS ,GRACIAS ,GRACIAS!!!!! TU FAN ARGENTA!!!!

This makes no sense at all if you just consider the songs. Maybe it's the artwork or any personal reason we don't know.
Click to expand...

Yeah. Personally I'd rank 'World Won't Listen' just above 'Bombs', despite them sharing so many songs. It feels more like a cohesive piece to me, whilst the inclusion of all those early 'Hatful' era tracks on the US compilation makes it jump around in time too much for me. Great songs, but it's all over the place.
L

Best solo: Vauxhall
Best solo comp: Bona
Best Smiths: TQID
Best Smiths comp: HoH
Worst ever album: LIHS (followed by WPINOYB and CS).
"[I call] for every shade and persuasion … we shall always be alongside each other - everyone's culture of value."
- Morrissey, May 2019
A

in your opinion.
D

rivum said:
if this is intended as his ranking of albums, best to worst, it surely is a strange one.
I don't think a similar list prepared by anyone on here would closely resemble this.
Click to expand...

Whilst it’s not my favourite, of his studio albums, I can understand why Morrissey would place World Peace at the top. It still sounds great and I suspect that, ultimately, it will be remembered as the best of his post-Maladjusted LPs. He probably anticipates that too (I accept that might concern some here).
Last edited by a moderator: Sep 30, 2021

Not according to Morrissey
You must log in or register to reply here.

Post Millennial / Fiona Dodwell: "Morrissey and the misguided outrage of his critics" (August 29, 2021)
2 3