“Morrissey, so much to answer for” by Dorian Lynskey - New Statesman

Morrissey, so much to answer for - New Statesman
There are no excuses left for the former Smiths frontman’s repugnant political views. 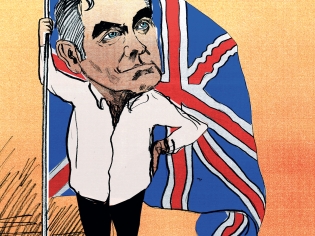 reelfountain said:
The banking elite are purposely flooding Europe with immigrants to weaken society. That's where you and me do not agree. Do you think migrants are allowed here out of kindness? Rescued from hellholes to enrich, bring diversity etc? That's Tony Blair PR talk that nobody believes anymore. The elite see humans as pawns on a chess board. All they care about is money - bringing migrants from dead economies to Europe fills their coffers. It also weakens the morale, unity and confidence of the people living here. How do I know that? Because every single person I've grown up with in London has moved away because of this very reason (and they're not all white by the way). The working class have been virtually decimated from London and replaced by those more easily exploitable. Migrants (and young black men also) commit more crime and more rapes than whites - the prisons are packed with them. That speaks for itself. Check the suspects of virtually all rapes in London: black or foreign. It's a power crime against white women. Similarly, in London most muggings are black on white and have been since the 80s at least. Yes, blacks might knife and shoot each other but these are mostly gang related attacks to do with turf and drugs.
No wonder so many people are disillusioned with the same 2 party Labour/Tory roundabout over and over. What's wrong with suggesting an alternative? Is it a crime? Obviously so.
These are all uncomfortable facts that don't fit into a Marxist reading where no evil people exist (apart from whites). Maybe you need to move on from your nostalgic teenage /uni mindset and accept certain realities about the world. False stats by paid 'research groups' that say everything's hunky dory might be comforting, but they're not true. There's a big sinister plan at work here - and those that know (like Morrissey) aren't going to shut up about it. In Berlin rapes by migrants are a big problem. Let's face it, modern young Muslim migrant men see Western women as loose easy meat. They are misogynist to the max with no respect even for their own women, yet alone a white woman showing a bit of leg. Speak to young German women who have to travel home from work at night (not rich lefties who get taxis everywhere) - I have.
Click to expand...

I want what you're on.

reelfountain said:
I want what you're on.
Click to expand...

Johnny Barleycorn said:
I haven’t seen much evidence of debate. I’ve seen plenty of condemnation. I’ve seen posts and links to stories - including the one above - in which the author assumes the only opinion which matters is their own.

It seems to me this is an issue of culture rather than race. I’d enjoy a week in which I didn’t hear the word Islam. I’m sick to the back teeth of it. I’d like a few days in which it didn’t dominate the news. Some can pretend all they like, but Islam isn’t a race. You can join it if you’re mad enough, or leave it if you’re brave enough.

I’d be grateful if, when another atrocity is committed in its name, the next day I didn’t turn on Sky News to be told how wonderful and peaceful it is really and then go to an ad break in which an NGO tries to tap me up for a fiver a month to stop men abroad who follow that credo marrying eight year old girls. It’s almost the definition of mixed messages.

I’d like it clarified. Is it marvellous or does it also allow in its teachings the raping of young children? Or perhaps it hits that minuscule sweet spot where the left are happy for it to apparently endorse peace, love, understanding on one hand and child rape on the other? Why can I donate by text to help stop such practices in the third world, but potentially face arrest for being appalled when it happens in the mill towns of Northern England under the direct and deliberate protection of Labour councils and the police?

Why is Saudi Arabia, one of the great bogeymen of world politics, and the home of Islam, excoriated by the left, yet those same people welcome its teachings in the West? Do they expect a more liberal, reformed Islam to take root? I mentioned the other day the fate of the Iranian hard left who sought to co-exist with Khomenini’s vision after the fall of the Shah. They were immediately killed.

I get the impression that there are some on the left who look at Islam, see parallels with communism, and think, like their Persian predecessors, they can bring about their own revolution in Europe. I’d advise them to think again. They are only competing to be last in the mass grave.
Click to expand...

I see in some Sharia excusers the same ingenuity or ignorance some people suffered around the world before dictatorships established. You never know when darkness comes until you begin to question yourself "why were we so stupidly naïf? This little piece of freedom and autodetermination people still enjoy in some places of this world is very fragile. But we have the tendency to believe it's carved in stone. Well, not at all. Sadly.

Mozhole said:
David Bowie has made a career out of reinventing himself, both physically and musically, but his most controversial persona was his Thin White Duke character from 1976, a self-described "emotionless Aryan superman" that Bowie developed for his Station to Station album. Around this time, Bowie would make several pro-fascist comments during interviews, including praises of nationalism and Adolf Hitler, culminating in a famous photograph of Bowie allegedly giving a Nazi salute. In later years, Bowie would blame his actions during this time on his heavy drug use and commitment to the Thin White Duke persona.
Click to expand...

I wonder if Pink Floyd's 'The Wall' movie is based around Bowie's Thin White Duke persona and Oswald Mosley?

I lack the will to read the article. But guessing Dorian is a Guardian puppet? His father naming It/him (maybe female) Dorian, was pretentious without substance. Oh so many. They should build a commune in Wales to wail. Bah bah

What a fool i have been, here's me thinking this site was about the music of one of the greatest singer/songwriters ever, how wrong. Uncleskinny blocked me after pointing out that he must hate life. I have been told by him, that 'he has an excellent f*cking life' unlike me, which is funny actually since I've just logged in for the first time in 6 days and straight away he comments...it's almost like he thinks an excellent life constitutes sitting on this website weeping over his lost youth every minute of everyday. Grow up stop living in the past

wtf? this sh$t never happens in USA and we have a lot more muslims than you.

A
Manchester, so much to answer for

When did charming become cranky? Why a middle-aged Morrissey is so hard to love - The Guardian
3 4 5

Sunday at 2:37 PM
BonfireOfMorrissey
B