Plume​
This week the inscrutable popular music genius known as Morrissey unveils a new 20th anniversary edition of his early solo singles collection, “Bona Drag.” To promote its release, last Sunday he was to appear on BBC television’s weekend current affairs magazine “The Andrew Marr Show.” The prospect of Morrissey — a man who once wrote a song about Margaret Thatcher in the guillotine (chorus: “When will you die?”) — appearing on the same programme as Marr’s other guest, UK prime minister, Conservative party leader and improbable Morrissey-admirer David Cameron, augured for TV gold of Frost/Nixon proportions.
Except that last Wednesday it was announced Morrissey had suddenly cancelled that interview and all other scheduled promotion, no official explanation yet forthcoming. While possibly a cause of distress and confusion for only the greenest of novice Morrissey apostles (he hates the word “fan”), for we veterans, frayed by years of similar blow-outs and eleventh hour cancellations, this consistent unpredictability is par for the course. All part of the Morrissey enigma. All part of the “fun.”
Whatever his reason this time, I pray shivering on all fours it has nothing to do with this week’s publication in the United States of my book “Mozipedia - The Encyclopedia Of Morrissey And The Smiths.” An attempt, of sorts, to fathom the unfathomable, deconstructing the cosmos of the man and his music into an alphabetical index, as much to find the question, rather than the answer, of who Morrissey is.
Fittingly conspicuous by its absence, among the 600-plus entries there is none under C for cancellations: if there were, it would fall between deviant Roman emperor Caligula and French footballer Eric Cantona, respectively a lyrical reference and a mid-90s “obsession.”
In understanding Morrissey (well, we can but try) no detail is too small for consideration: that he chose to sample Martin Sheen crying “Go on!” from “The Subject Was Roses” at the start of a song about a window cleaner (1997’s “Roy’s Keen”); that he was an admirer of the late Bea Arthur; that he has a running-joke involving the London suburb of Sidcup; that he’s so particular about how he likes his mashed potato, when he dined at the home of Happy Days actor Henry Winkler he instructed The Fonz to ring his mother in Manchester for the specific recipe; and that, as Killers singer Brandon Flowers recently told me, he once went thrift shopping in Japan with a Madonna impersonator (now Flowers’ mother-in-law). 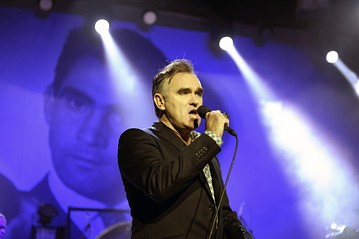 Everett Collection​
None of which would be of any importance if Morrissey wasn’t the greatest British pop singer of the last 30 years. Art as great as The Smiths — or indeed “Bona Drag” with its own unrivaled encyclopaedic portfolio on subjects as varied as male prostitution, disability, drugs, séances, hairdressing and the Kray Twins — is so poetically potent that those of us who fall under its spell (Lady Gaga included, once a regular at McGovern’s Bar’s infamous Smiths nights) won’t rest until we know what biscuits its creator dunks in his tea.
That, at least, is my excuse for penning a 350,000-word encyclopedia on the man. And presumably why Brandon Flowers, who as a youth once waited on Morrissey’s table in Caesars Palace, retained the singer’s soiled mug which he still cherishes today in his family safe (sadly having yet to submit its holy residue to scientific dunking analysis).
Looking for answers, I’m frequently reminded of Morrissey’s hero, David Bowie, who once began a press conference with the immortal words “Hello. I’m David Bowie, and you’re not.” And there’s the rub when it comes to Morrissey, author of a song entitled “How Can Anybody Possibly Know How I Feel?” which poses all manner of philosophical conundrums (if Morrissey falls down in an otherwise empty forest, does he make a noise?).
Personally, I’d like to think Morrissey would call a similar press conference only to leave a hall full of journalists staring in agitated confusion at an empty chair and microphone while he sat in blissful isolation dunking biscuits elsewhere. There in body or only in spirit, the message would be loud and clear. He, still and forever, is Morrissey. And we’re not.
Simon Goddard is a music journalist living in London and the author of “Mozipedia: The Encyclopedia of Morrissey and the Smiths.” He has recently written the sleevenotes to the forthcoming Orange Juice boxset, “Coals To Newcastle” (Domino Recordings).
"If I knew where good songs came from I'd go there more often." Leonard Cohen
"I’ve always held the song in high regard because songs have got me through so many sinks of dishes..." Leonard Cohen

Oh c'mon, Simon has to address the people who hadn't heard of The Smiths / Morrissey.

"And presumably why Brandon Flowers, who as a youth once waited on Morrissey’s table in Caesars Palace, retained the singer’s soiled mug which he still cherishes today in his family safe (sadly having yet to submit its holy residue to scientific dunking analysis)."