Today is the official release date for "It's Over"/"It Happens Every Time" single/45 on BMG.

No sign of the disc as yet here at M-central. Please let us know if one pops up in your local scrap metal merchants. Thank you. -VH "

Remind me again ~ do we know who the hell VH is? 
(Apologies - only a small image currently) 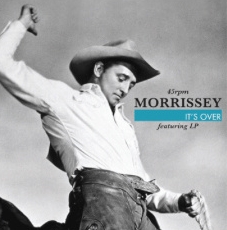 Although this release isn't on the indie store Warners release sheets for the 6th, 13th or 20th of December - it is showing on the Warner's sales portal with a release date of December 13th.
The Warner's product number is: "4050538559873".
If searched for, this code gets 2 hits for Italian record shops:

Both with changed artwork and cite a December 13th release date too. "It's Over" is now scheduled for release in the second week of November.
The B side is a version of Tim Buckley's "It Happens Every Time".

Is it over with BMG?

BMG have decided against releasing 'It's Over' as a single.

Morrissey is presently on tour in the USA, and describes the audiences as "fantastic … and full of hope… at an urgent time when most modern music cannot provide one genuine insight." Today is the official release date for ¡The Best Of! Morrissey.
This is the first time it has been available on black/clear 180g vinyl.
The black Parlophone vinyl has been available almost a week prior in many UK indie shops and one clear ltd. vinyl Rhino version of the record has been spotted via Twitter so far (insert with the record states 1600 made): 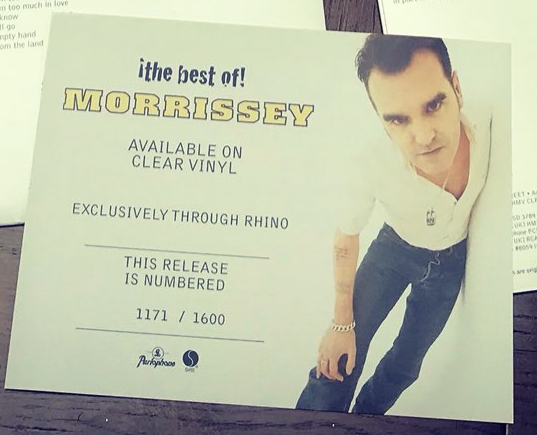 Rights to use the photograph from the film 'Eva' (1962) for the "Lady Willpower" 45 - as previously unveiled on M-central - has been denied. The sleeve is now changed and features Lili St Cyr. This will delay the single release for a few weeks. not sure if this has been shared but Releasing on August 30th 2019 Best of Morrissey! on 180g Vinyl. wonder could we be seeing a burglary years vinyl release in the near future.

Famous when dead added the links: